Fear of Isolation Gets Israel Talking 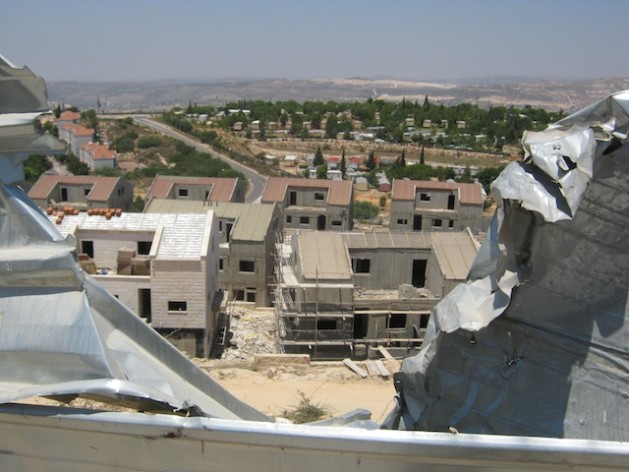 A settlement construction in Ariel in the Occupied West Bank. Credit: Pierre Klochendler/IPS

JERUSALEM, Aug 6 2013 (IPS) - The fresh Palestinian-Israeli peace drive stems from the realisation by all parties involved in the process that diplomatic isolation constitutes a strategic threat to Israel. This isolation whip will be held above Israeli Prime Minister Benjamin Netanyahu’s back for as long as it takes for him to agree to the pre-1967 lines as basis for the end of the 46-year occupation.

In the absence of such commitment from Netanyahu, what has paved the way for a resumption of peace talks after a five-year hiatus is the Israeli cabinet’s approval of the release of 104 veteran Palestinian prisoners held in Israeli jails for more than 20 years, plus an unofficial and partial settlement freeze.

The Israeli media reported that Netanyahu committed to U.S. Secretary of State Jim Kerry to limit the issuing of building tenders to 1,000 housing units in the settlement blocs during the nine-month period allocated to the peace talks. But no tender has been issued.

His defence minister, Moshe Ya’alon, referred in the Israeli media to “many strategic considerations, which may be revealed in the future” as catalyst for Israel’s tactical decisions.

What are those hidden strategic considerations?

On one hand, Netanyahu fears that in absence of progress on the peace front, the U.S. will be reluctant to provide diplomatic or military support to Israeli aerial strikes on Iran’s nuclear sites, if he decides to order such strikes.

Even if he refrains from doing so but, at the same time, refrains from negotiating seriously with the Palestinians, Israel might not have a say in the international management of the Iran nuclear crisis.

It might also find it harder to have Israel’s position on the Syrian civil war, or on the risk of an Egyptian civil war, taken into consideration internationally were it to be held responsible for a lack of progress in peacemaking.

On the other hand, it would be extremely difficult for the U.S. and the European Union (the members closest to Israel within the Quartet for Mideast Peace which also comprises the United Nations and Russia) to convince their Arab allies that they’re powerful enough to manage the crisis in Syria and Egypt, and with Iran, if they are powerless vis-à-vis Israel.

In that case, a military intervention on Iran’s nuclear installations – be it a U.S. attack or an Israeli one with or without U.S. acquiescence – would be vilified, and not only by the Arab world. It would also harm Washington’s Mideast interests.

Though it had already become clear that Kerry succeeded in jumpstarting the peace process, the EU nonetheless decided to divulge new guidelines requiring from its 28-nation bloc a coordinated treatment of future funding and cooperation agreements with Israeli entities.

Notwithstanding various European Boycott, Sanctions and Divestment (BDS) actions, the new directives, to be effective in 2014 instruct the EU member-states to ban agreements with Israeli organisations or individuals operating beyond the pre-1967 lines.

Israel will be required to sign on any such future agreement that the beneficiary respects the new guidelines.

Such stamp of approval of the EU stance that Israel’s claim of sovereignty over the occupied West Bank and East Jerusalem is illegitimate is of course adamantly rejected by Netanyahu.

There are now five months until the beginning of 2014 for Israel to show progress at the negotiating table, and to negotiate better terms of implementation of future agreements with the EU.

Another Israeli consideration is the threat of yet another reproving fall at the U.N. General Assembly annual meeting.

For the past two years, both the UNGA and the U.N. Security Council have been grappling with Palestinian bid for recognition of statehood. In 2011, the bid was postponed, yet bounced back the following fall.

In such case, Palestine would be empowered to launch criminal procedures against Jewish settlements or against any Israeli military assault, on the Gaza Strip for instance.

Come September, and Netanyahu understood that he would stand powerless against anti-Israel initiatives at the U.N.

It’s now sinking in amongst Israeli decision-makers that it’s not the Palestinians who constitute a strategic threat to Israel, but the stalemate with them.

Hence, upon arriving to the U.S. on Monday for the official opening of the peace talks, the Israeli negotiating team went first to meet U.N. Secretary-General Ban Ki-moon.

The purpose of the meeting was not only to brief Ban Ki-moon about the resumption of the negotiations but, more importantly, to ensure that the U.N. will support the talks and, subsequently, will prevent any further unilateral initiatives against Israel during the process.

With all the scepticism and pessimism heard in the region, there’s a historical parallel to Israel’s sudden infatuation with peace.

A huge Damocles Sword is hanged over Israel’s head as the world is sick of Israel’s occupation.

Israel’s status depends now on the international community’s appreciation of the vicissitudes of the process, and judgment of the progress made by Israel in the painful quest for a final agreement.

The accumulation of diplomatic isolation on Israel is what may finally give peace its best chance.