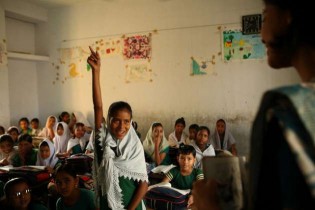 By Baher Kamal
“Unless we take action, the share of children leaving school in developing countries who are unable to read could increase from 53 to 70 percent.”

How Place of Birth Shapes Chances of Going to University

Many newly independent African countries in the 1960s inherited regional and ethnic inequalities in formal educational attainment. These new states bound together sub-national regions of diverse ethnic and religious communities. The regions differed in their exposure to missionary activity – the main vector in the spread of formal western education in the colonial era.

By Joseph Chamie
The ageing of human populations is an inescapable demographic future. That evolving and universal future is increasingly challenging governments and the public, who are by and large ill prepared for that certain future.

By Baher Kamal
Kailash Satyarthi,  an Indian social reformer and co-recipient of the 2014 Nobel Peace Prize, along with Malala Yousafzai, spoke in a recent international forum about the devastating impacts of child labour.

By Armida Salsiah Alisjahbana and Gillian Triggs
Most countries in the Asia-Pacific region are on track to reach universal birth registration by 2030: an incredible achievement and a significant milestone in realizing human rights and equality. However, as the COVID-19 pandemic has exposed, many weaknesses remain in official recording systems, creating gaps in knowledge about the population and affecting how authorities respond to crises and reach those in greatest need.

By Joseph Chamie
A possible solution to childcare needs is polygamy. Polygamy, the practice of having more than one spouse at the same time, was not against the laws in many countries in the past. For example, polygamy was made illegal in China in 1950, in France at the end of the 20th century, in the United States near end of the 19th century and became a felony in the United Kingdom at the start of the 17th century.

By Zoltán Kálmán
UNSG Antonio Guterres convened the first-ever UN Food Systems Summit which took place on 23-24 September. The Summit preparation had a well-designed structure with remarkable and appreciated leadership of Amina Mohammed, UN DSG. Due to the hard work of the UN Special Envoy, Agnes Kalibata, and her whole Team, the organisation and logistics of the Summit was excellent.

By Daud Khan and Leila Yasmine Khan
The USA and its allies have repeatedly stated that promoting women’s rights was one of the key reasons they were in Afghanistan. The US military top brass, in a letter to marines stated that they were in Afghanistan “for the liberty of young Afghan girls, women, boys, and men who want the same individual freedoms we enjoy as Americans”.

Ivorian Cocoa Farmers Are Beating a System To Reduce Child Labour: Here’s How

By Ann Keeling, Divya Mathew, Deepa Venkatachalam, and Chantal Umuhoza
Gender-responsive universal health coverage (UHC) has the proven potential to transform the health and lives of billions of people, particularly girls and women, in all their intersecting identities. At tomorrow’s kick-off to the 2023 UN High-Level Meeting (HLM) on UHC, Member States and stakeholders will review progress made on the 2019 HLM’s commitments and set a roadmap to achieve UHC by 2030. We, as the co-convening organizations of the Alliance for Gender Equality and UHC, call on Member States to safeguard gender equality and sexual and reproductive health and rights (SRHR) as part of UHC implementation, especially in light of the gendered impacts of the COVID-19 pandemic.

By Danielle Nierenberg
The global food system needs a massive overhaul – this was clear before the Covid pandemic and it is even more true today. Feeding the world in a sustainable and healthy way is entirely possible but it is also inextricably linked to tackling the climate crisis by reaching net zero emissions, and to halting the dizzying decline in bio-diversity which is currently threatening the survival of one million plant and animal species.
Next Page »