NAIROBI, Aug 20 2008 (IPS) - For the first time in its 60 years of existence, there is a ray of hope for the one million inhabitants of Kibera, one of the world's most densely-populated slums. After spending most of his life on opposition benches – or in prison – as a champion of the poor, the member of parliament for this desperately poor constituency is now the prime minister of Kenya. 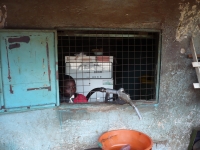 "An MP's primary duty is to his constituents. Raila (Odinga) owes his share of power to the youth of Kibera who not only voted for him but also rose up in arms to protest electoral rigging," says Eric Otieno, a young man from the majority Luo community in Fort Jesus, one of the dozen or so villages in this 260-hectare slum crowded into a ravine in Nairobi hills.

"We understand his limitations as he is only sharing political power with President Kibaki. But all we are asking for is the basic human dignity and survival."

Whatever approach you take to enter Kibera, the disparity between Nairobi's poor and rich is conspicuous. You either go past a scuba diving club and a majestic Catholic church, or gaze at the palatial Moi Kabarak, the residence of former president Daniel Arap Moi, which sits in the corner of a golf course just beyond the last of Kibera's shacks.

The Royal Golf Course itself is contiguous with Kibera. Mis-hit balls by aspiring golfers sometimes land in the winding maze of narrow dirt and stone pathways, lined with heaps of rubbish and divided by a labyrinth of open sewage channels, overflowing with people struggling to survive. Children throw the balls back and usually get a 20-shilling coin thrown back at them from the lush, manicured greens.

On paper, all of Kibera is government land and all construction here is illegal. But its inhabitants pay varying amounts of rent to 'landlords' who, with the connivance of district and provincial administration officials, have managed to grab rights to build on this land.

Most shacks are roughly 3 x 3 metres, shared by up to eight people; glued to one another in a patchwork of different shapes. For toilets, residents must either pay for access to a pit-latrine used by 200-odd other people, or defecate in a bag and throw it over the wall.

Similarly, control over the few pipelines bringing in stolen water is in a few hands. Twenty-litres of water cost up to ten shillings (6.5 cents).

"Kibera is an ongoing, daily emergency," says Caroline Testud, co-founder of the Coalition for Peace and Development (COPE), a new alliance of 14 community-based groups and NGOs. "Humanitarian assistance by international and local NGOs is needed but it is not a substitute for the government's role. A durable solution warrants political will and governmental action."

Kibera, like its counterparts in Kampala, Lagos, Lusaka or Cape Town, signifies state failure of criminal proportions in managing urbanisation.

The government has no accurate idea what's going on in Kibera: there is no official map of the area; the last census took place in 1987, and no one is sure about the mortality rate or any other vital socio-economic statistics. The area's population is given as between 700,000 and 1.2 million.

College student Christian Skaro, a resident of Kibera's Ayani village, cautions against stereotyping Kibera as a dangerous place infested with criminals which you cannot visit without being mugged. "There are no gangs or gang warfare as such in Kibera. It should be obvious to all that most people here work or are looking for work. 65 per cent of Nairobi's industrial labour and work force comes from Kibera.

"And though the government does not recognise it as a formal settlement, the officials of Nairobi City Council and other departments are always busy collecting taxes and other levies from the shopkeepers and traders of Kibera.

"You can see it's a vibrant place. People live here. You can see the potential of its people in the way they deal with their daily survival needs."

There is no consolidated data on the hundreds of organisations working in the area, but some activists estimate there are more than 700 NGOs and community groups working on projects in Kibera, among them a crowd of expatriates working for an alphabet soup of United Nations acronyms, and international and national NGOs.

Parallel to this is a religious fervour, palpable throughout the week, that peaks on Sundays when church sermons and street pastors raise a cacophony of holy noise. Most of the better buildings in Kibera are churches or mosques.

However, especially after the experience of post-election violence, skepticism among the youth about both the NGOs and churches is growing.

"For long we've had only two kinds of community leaders in Kibera: pastors and community politicians. Both have misled us. Now new leadership is emerging from within the youth that does not want to see the world through tribal and sectarian lenses," says Skaro.

Yet, everyone IPS talked to in Kibera was hopeful that with Raila in charge, change will happen. "A solid platform is available to introduce new policies. There is a strong force of young and organised men and women our MP can rely on," says Peter Obiero, a language teacher. He believes that people are keen to leave the past behind and that there are emerging signs of social change.

One such endeavour was launched last Saturday. Past an impromptu assembly of six young men passionately discussing national politics with a pro-Raila bias, beyond a heap of rubbish where a lucky scavenger had found a pair of socks and a banana for his lunch, in a field next to a church restored after being burnt a few months ago in Kenya's post-election violence, two teams of women readied themselves to play a game of football to mark the inauguration of Kibera Women for Peace and Fairness, a group of 300 women affected by the violence and now part of the COPE.

The group's coordinator, Jayne Anyango, acknowledged that plenty of 'briefcase NGOs' have made people doubt the value and effectiveness of voluntary activism. She says her group consists of women who were directly affected by the violence and their motivation is quite personal.

"You cannot tar the entire sector with the same brush. We have sought no funding and rely entirely on contributions from our members and individual supporters. Membership is not restricted to one ethnic or religious group. It is our common suffering. There is a need to face and address the trauma our communities, especially women, have suffered this year," asserts Anyango, explaining her group's mandate.

The group first came together in the midst of troubles in Kibera after last year's elections. So far, other than providing medical help and psychological counselling to women caught in the election violence, the group has worked on engaging these marginalised women in social activities to develop a sense of community.

Anyango disagrees with the suggestion that development NGOs have not achieved anything substantial. "As the government provides virtually no public service, where would we be without the medical care, HIV control programmes, education and other essential projects run by the NGOs? The very fact that there is space for women like us to organise ourselves and to be able to work for promotion of peace is possible because of the years of effort put in by development workers from abroad and locally."

Testud of COPE also believes that given the limited capacity of NGOs and community groups, and in the changed political landscape of the country, the government can no longer continue to ignore the condition of the people of Kibera. Linking up with the government and advocating the rights of slum dwellers is therefore a core COPE mandate.

"Everyone acknowledges that Kibera needs social housing, water, sanitation and basic health services. Hundreds of NGOs and charities have been working on these issues for decades. Why no sustainable results could be achieved is because the issue is essentially political. If anyone can take on these powerful, politically connected vested interests, it has to be the political leadership of the country," says Caroline Testud.

"With the return of peace, there's been a gradual rise in expectations. Excuses for political failure are running out," she says.