NAIROBI, Nov 1 2008 (IPS) - On the fifth day of every month a group of women entrepreneurs gather to share their experiences and discuss matters of trade. What makes this exceptional is that the women are from south-central Somalia and they meet in Mogadishu, one of the world's most devastated and dangerous cities. 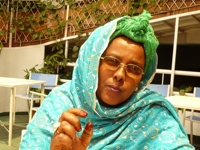 Shamso Abdulle: Women can move around more because they do not belong to clans. Credit: Najum Mushtaq/IPS

With 780 registered members, most of them from the Banadir region, the Banadir Businesswomen's Association is headed by a veteran businesswoman, Shamso Abdulle. Banadir is of the eight administrative units in south-central Somalia which includes the capital Mogadishu.

A mother of nine, covered in a fashionable head-to-toe Islamic veil or hijaab, and insistent on speaking only in her mother tongue Somali, Abdulle is an unlikely business success story. The east African country where she lives has not had a central government for over 17 years.

The city where she lives has been ravaged by an unending internecine war between clannish warlords and by foreign military interventions.

‘‘When I started my business of importing furniture and other goods from India in 1984, Somalia was a different country,’’ Abdulle told IPS in Nairobi last week where she was attending a two-day seminar on the war economy of Somalia's capital, organised by the Norwegian Institute for Urban and Regional Research.

‘‘For six years I was able to do normal trade and earn enough to be independent and expand my business to other places like Dubai.’’

Then, in 1991, the civil war erupted. The state collapsed and the era of the warlords began. Like most other businesspeople, Abdulle had to abandon her business and flee the city.

‘‘I had to leave Mogadishu and live with my family in the bush for months. My savings were disappearing fast. As soon as the fighting receded a bit, with the intervention of a UN mission, I returned to the capital to explore the possibility of resuming trade,’’ she recalls.

On her return she found that the rules and norms of business had completely changed. The Mogadishu port was closed and would not open again until 2006, which forced businesses to other distant ports like El Ma'an, Merka and Kismayo.

Instead of government regulations and institutions, traders had to negotiate safe passage for their goods—and for themselves—with an assortment of militias. Money transfers through banks had been replaced by the informal hawala, or hundi, system.

It was difficult for women to get loans from the big businessmen who saw no assurance of repayment or getting a return. The public's purchasing power was down; the violence and insecurity was high, as it remains to this day.

But there was also a unique opportunity for women to step into business.

‘‘One of the main reasons why there are so many women traders in Mogadishu is because so many men died in the conflict or lost their government jobs. Also, working as street vendors or shopkeepers is considered beneath the dignity of men who before the war were working as doctors, lecturers and bureaucrats in Mogadishu,’’ explains Abdulle.

‘‘Most women were forced into business to ensure their families' survival in a chaotic city.’’

Also considered derogatory for a Somali man is to do domestic chores like cooking, taking care of the babies and house cleaning. Women in business, says Abdulle, also have to take care of their traditional roles at home.

Another reason why the number of businesswomen has increased during the conflict is the relative sense of security that women traders enjoy compared to men.

‘‘Women are clan-less and not engaged in fighting. They can carry goods and sell them into those areas of the city and other parts of south-central Somalia where men cannot,’’ Abdulle expounds. ‘‘They can make the best of the worst conditions.’’

In 2000, small and middle-income businesswomen got together to form an association to protect and promote women traders. Abdulle divides her group members into several categories.

Most women traders in Mogadishu sell qat or miraa, a mildly narcotic plant whose leaves and shoots are chewed for hours by people all over Somalia (and in other parts of the region) as a pastime. Large quantities of qat are imported from Kenya and Ethiopia which are then sold mainly by women vendors and shopkeepers.

‘‘Looting of miraa consignments on the way to the market from the airport is common. They have to pass through as many as 50 roadblocks or checkpoints and qat is perhaps the most sought after commodity in the city,’’ Abdulle says, describing the difficulties women traders face daily in the city.

She recalls that though there was peace during the brief six-month interregnum of the Islamic courts' rule in 2006, it was a bad time for women traders.

‘‘Not only had they banned the selling of qat but the Islamic courts also wanted all women to stay home and imposed harsh restrictions on them.’’

And then there are women who venture into the market just to ‘‘seek their luck’’ by selling food items. Another category consists of waqda, or vendors, who have taken a loan from the big businessmen and are trying to repay it through small restaurant businesses or as retail sellers.

Women are also into selling jerry-cans of petrol. Textile products and furniture is another area of trade for women.

‘‘Many of our members are those who carry goods on their shoulders as they have no shop and cannot rent a sales point. These itinerant traders form an essential part of Mogadishu's economy. A majority of women in business barely make the ends meet and remain poor. But they are trying.’’

She herself is from the other end of the spectrum, though she describes herself as a mid-level businesswoman. A regular traveller to Dubai, India and other countries, Abdulle identifies a number of problems Somali women traders face in the field.

‘‘Of course, insecurity within Somali, particularly in Mogadishu, is the biggest threat. But, in the field, Somali businesswomen also suffer due to lack of basic skills. Most of them are illiterate and need men's help to do basic accounting and communicate with the world outside.’’

Therefore, Abdulle explains, capacity building, especially in terms of education and English-language skills, is one of the core activities of her association.

‘‘Despite their contribution to business in Mogadishu against all odds and in extremely violent conditions, women remain voiceless,’’ observes Abdulle as she notes that there is no women representation in the 75-member main council of the Banadir business community.

‘‘Without the participation of women, Mogadishu's war economy could not have survived the ongoing conflict. From cleaning the streets to selling essential items like food and qat, women are critical for keeping life going amid the violent chaos of Mogadishu.

‘‘It is about time they also had a voice in the main decision-making body of businessmen,’’ Abdulle concludes.