UGANDA: On the Global Market Track to Prosperity

KAMPALA, Nov 28 2008 (IPS) - Uganda's finance ministry has ambitious plans to reduce the country’s donor dependence. With foreign funds accounting for almost 50 percent of the national budget, officials believe a slew of measures announced in the 2008/09 budget could bring that down to about 30 percent. 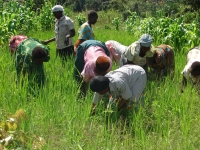 The budget may fail women like these. Credit: Joshua Kyalimpa/IPS

An enthusiastic Minister for Finance, Planning and Development, Dr Ezra Suruma, who calls his "a prosperity for all budget", predicts Uganda will be able to fund itself domestically "sooner than later".

Tea exports touched 44,015 tonnes of tea last year. This is expected to increase to 46,000 tonnes, according to Isaac Munabi, executive secretary of the Uganda Tea Association.  In 2007, earnings from tea exports were 47.6 million dollars as per official records. With some 21,000 hectares of tea gardens, average yields in Uganda are about 2,500 kgs per hectare, according to the association. Last year, coffee exports too fetched an impressive 21 million dollars, the coffee development board says.

The resource envelope for the current 2008/09 financial year is based on the assumption that a projected real growth rate of 8.1 percent will be achieved and that low and stable inflation will be maintained.

For the country’s landless and subsistence farmers (70 percent of farm labour is women) the government has set up a land acquisition loan facility – a revolving fund of roughly 3 million dollars. The facility is to be disbursed through Post Bank and participating small farmers grouped in cooperative societies or SACCOs.

Rose Nakito (40) is a resident of Mayuge district, in eastern Uganda. She and her husband Bosco Baligeya are farmers like their aging parents.

Nakito tends coffee on a small plantation owned by her husband, to supplement the meagre salary he draws as a teacher at the nearby Wandegeya primary school. Nakito also works on a separate garden growing food crops such as maize, beans and potatoes to feed the family of seven and sells anything left over.

There is rarely any surplus to earn her cash and she largely depends on her teacher husband for some money from the sale of coffee sales or his salary.

Uganda’s secretary to the treasury Keith Muhakanizi told IPS that Nakito will be able to draw money from the revolving fund. An agreement has already been signed with Post Bank to ensure timely and efficient disbursement of the facility.

But independent analysts warn the budget may not be able to deliver on promises.

Social scientist Dr Aaron Mukwaya of Makerere University says most of the plans may never be implemented since a significant portion of the funds are projected to come from donors who may renege on their promises due to the global financial crisis.

According to Mukwaya, the areas that Uganda’s national budget seeks to address are popular with donors but are not necessarily likely to lead the nation to prosperity. "Our budget is almost 50 percent donor funded and when we look at the current economic situation globally, donors cannot provide the money. Yet the budget is emphasising public sector spending and the private sector seems to have been ignored."

The Uganda government has put aside about 60 million dollars for the National Agricultural Advisory Services – to supply improved varieties of seeds and inputs to farmers linked to the production of specific commodities including coffee, tea, cotton, fish and fruits.

But Uganda has no control over world markets, argues Mukwaya. In addition, the budget’s emphasis on technologically improved inputs are linked to the production of cash crops, which are largely the preserve of men.

But Dr Lawrence Bategeka, a research fellow at the Kampala-based economic policy research centre, says most of the farmers in Uganda work small land holdings and the national budget seems to be ignoring them. He says the emphasis of the budget should be on how to empower subsistence farmers.

"I was moving around upcountry and met a farmer who had 100 goats on a one-acre farm and could earn from the farm about 10 million shillings per year. That kind of small farmer could up his earnings if helped by the government," Bategeka says Finance Minister Suruma insists various stakeholders were consulted during the budget process but argues that while the 2008/2009 Budget may not have answered all the issues, it lays the foundation for progress.

But then can his budget bring "prosperity for all"? The jury is still out on this.

*This is the first of a three-part series that looks at gender equality in finance in Uganda.