ACCRA, May 8 2009 (IPS) - It looks like someone is not telling it as it is as far as meeting the Ghana’s Millennium Development Goals (MDG) on water supply is concerned. 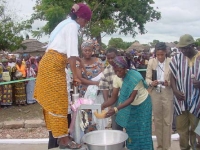 Whilst officials of the country’s Water and Sanitation Monitoring Platform (WSMP) claim Ghana is on track, the minister in charge of water resources, works and housing, Albert Abongo thinks otherwise.

The figures from the United Nations MDG monitor are encouraging enough, indicating that the number of Ghanaians using improved water sources had risen from 56 percent in 1990, to 80 percent by 2006.

Richard Adjei of the WSMP told the participants at the Water Africa 2009 Exhibition in Accra in early April that "at current pace of increase, the projected trend indicates that Ghana could reach 84 percent for improved drinking water by 2015 and reduce the population that will not use improved drinking water to about 4.3 million."

But the water minister did not mince words when he addressed the same audience of manufacturers and water sector specialists from around the globe.

"For Ghana to achieve the MDG target of 78 percent population coverage for potable water by 2015," Abongo said, "government will require not less than $1.6 billion to rehabilitate and expand it existing water treatment facilities for urban water supply, and also provide boreholes for communities and small towns' water systems."

This is money that cannot be raised easily. Kobbie Kessie, managing director of the Ghana Water Company, which is responsible for supplying urban areas with water, said the Nordic Development Fund, World Bank and the government of Ghana have so far spent 87 million dollars to develop the urban water supply.

"However, another 850 million dollars more is needed for the next five years," Kessie said.

Figures produced by the bodies responsible for Ghana’s water infrastructure also squarely contradict the rosy picture painted by the WSMP.

According to the Community Water and Sanitation Agency (CWSA), at the end of 2008, only 8.4 million of Ghana's rural population of 14.8 million were adequately supplied with water – just over 57 percent of these communities. The Ghana Water Company (GWC) says it covers only 58 per cent of the urban population.

"Current production by the GWC is 570,000 cubic metres a day as against the required volume of 988,900 cubic metres," said Kessie.

Contacted by email to explain the contradiction between the national figures and those of the U.N., Sara Duerto Valero of the Statistics Division of the Department of Economic and Social Affairs told IPS "discrepancies between our data and data provided by national organisations are possible due to the adjustments carried out by international agencies to ensure comparability and reliability of the data."

Popular perception in both urban and rural areas of the country suggests there is much work to be done. As does the lived experience of many Ghanaians: in the week before the exhibition, thousands of people living in the satellite communities that have sprung up around Accra were without water for days.

Joanna Lamptey, who lives at Teshie, a suburb of the capital, could not hide her frustration when on the third day, water was still not flowing through the pipes in her house. "We are not animals to be drinking from just any pool," she told IPS.

The executive secretary of the Ghana Coalition of NGOs in the Water and Sanitation Sector (CONIWAS), Patrick Apoya flatly rejects Adjei’s claims of progress. Apoya told IPS that "the country’s water problem has been an accumulation of several years of general neglect during which population has outstripped the infrastructure available to provide potable water."

He puts the blame for this long neglect on Ghana’s period of military rule from 1981 to 1992. "The military did not care as they left the citizens on their own and the mercy of donors."

"More importantly, no one recognised that, water was a human right." In Apoya’s view, the sector requires about $100 million a year. It received as little as $3 million a year and this resulted in very little being done.

Many of Apoya’s colleagues in civil society share his belief that past governments didn’t do much to improve the situation. They say the uncontrolled urbanisation that has taken place in the country over the past two decades is exacerbating the problem.

"Satellite communities of Nima and Mamprobi in Accra, for instance, have not been properly planned. So even if the government provides the funds, it would not be easy to lay the pipes to homes." Apoya added.

As the issue of infrastructure is being discussed, managing and protecting water resources has also come up. One of the country’s main water sources, Weija Lake, is facing a lot of problems. Among these are "high level of pollution, and complaints of odour and colour of treated water running through pipes," said Adwoa Painstil, water quality specialist of the Water Resources Commission.

Getting financial support from donors does not look an easy task with the effects of the global credit crunch yet to fully manifest themselves. Apoya believes the government can generate the funds locally to fund a sustainable water supply system that would fit their advocacy that "the state cannot leave any citizen out of water supply since it is a human rights."

"This can be done by some innovative way of imposing taxes on urban users to pay for the improvement of supply to the rural areas," said Apoya.

Whether or not this is a viable alternative is uncertain, but one thing and if the government would listen to this suggestion is another. Until, then it is becoming clear that Ghana’s attempt to achieve this MDG could become a dream.