JOHANNESBURG, Jun 11 2009 (IPS) - Despite the significant role groundwater could play in alleviating poverty, improving food security and contributing to overall development in Southern Africa, a lack of skills, finances and awareness of the resource means only a small percentage of the region’s supplies are tapped into. 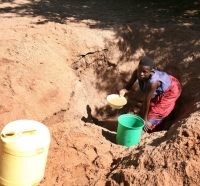 Improved access to groundwater could address the needs of the 40% percent of Southern Africans whose water supplies are vulnerable to disease and drought. Credit: Manoocher Deghati/IRIN

“Although Southern Africa boasts groundwater supplies, only a small amount is extracted – despite the high demand for water,” said Karen Villholth, a groundwater expert at the Danish department of Hydrology.

It is uncertain how large the region’s groundwater supplies are, but according to Villholth the underground formations – or aquifers – boast sufficient water for domestic use, drinking and small-scale agriculture.

“Southern Africa’s aquifers, as we understand it, are not capable of sustaining massive irrigation projects that are found in for instance South Asia where 60 percent of the agricultural land is irrigated with groundwater,” she said.

Figures from SADC’s Groundwater Programme show that for just over a third of Southern Africans, groundwater is the source of formal or improved water supplies; another 23 percent are supplied by networks drawing on surface water supplies.

But the remaining 40 percent – who lack access to improved water sources – are dependent on unreliable ground and surface water supplies that are vulnerable to disease and drought. Inadequate water supply profoundly affects livelihoods. According to the World Health Organisation (WHO), the global disease burden could be decreased by ten percent simply by improving people’s access to safe drinking water.

Diarrhoea kills 1.4 million children worldwide each year. In the WHO’s 2008 ‘Safer Water, Better Health – costs, benefits and sustainability of interventions to protect and promote health’ report, the organisation said that almost half of all water, sanitation, and hygiene related deaths in the DRC were caused by diarrhoeal illnesses.

Groundwater could supply many of the 100 million who lack adequate water in the SADC region, but for various obstacles, Villholth said. “First of all, groundwater is invisible and therefore many people are not aware of its existence. They tend to look at what is on the surface.”

One of the culprits is a shortage of hydrological data of the SADC region’s groundwater supplies. “We know that the SADC region has twenty transboundary aquifers,” Philip Beetlestone, project manager at the SADC’s Groundwater and Drought Management Project, said at the recent Water Dialogue, held in Johannesburg, South Africa.

“There could be more sources, but at this stage this is all we know.”

In his paper, Challenges to transboundary aquifers management in the SADC region, Beetlestone, project manager at SADC’s Groundwater and Drought Management Project, said that surface water is preferred to groundwater because the latter is “unseen and difficult to quantify in comparison to surface water … the general focus has been towards surface water, by both communities, political structures and the media.”

Imasiku Nyambe, coordinator of the Integrated Water Resource Management Center at the University of Zambia, said that communities and policy makers alike overlook the value of groundwater supplies.

“Many parts of the SADC lack bold national and local leadership when it comes to investing in groundwater infrastructure,” he said. “Last year, the Zambian government spent three percent of their budget to water infrastructure. At this pace, Zambia will be kept underdeveloped forever. Development and access to water go hand in hand.”

SADC Director of Infrastructure and Services Remigius Makumbe said that steps have been taken to make governments more aware of the necessity to explore the options provided by groundwater. “We are organising parliamentary forums where we bring parliamentarians together and raise issues such as groundwater. The aim is to increase awareness. During these workshops we provide them with information, which they will share with their colleagues back home.”

According to Ole Houmoller – the Danish International Development Agency’s regional advisor to SADC – there are various reason why groundwater should be looked at as a prime source of water.

“First of all it is there, right under our feet, and it has some good qualities: it is safe, and it is already in a reservoir, so you do not have to build a dam,” he said. “And compared to surface water, ground water is not very prone to pollution. This makes it cheaper as it requires less treatment and purification.”

“To access groundwater, you need to drill a well or a borehole, and to get the water to the surface, you need a pump,” he told IPS. “Many people in Africa cannot afford this.”

Ebenhard Braune, UNESCO’s Chair in Geohydrology at the University of the Western Cape, agreed with Ramoeli’s statement. Taking South Asia as an example – where groundwater is used extensively for both domestic use and commercial agriculture – he said: “In this part of the world, countries have benefited tremendously of the availability of cheap Chinese pumps and drilling equipment. This is not the case in Africa.”

This might be a result of the fact that South Asia is more lucrative for pump producers. “In Africa, only five percent of the land is irrigated with groundwater, while in countries like India this is 70 percent. And this percentage is growing,” Villholth said.

In addition, the development and exploitation of groundwater supplies in Southern Africa is hampered by a lack of skills. “Drilling a borehole or a well requires specialised skills,” Villholth said.

“You need to know where to drill l and how deep you have to go to reach the water. You also need to know about ground layers, and on top of that you require people to maintain and repair the infrastructure.”

These skills are hard to find Africa, said Kevin Pietersen – groundwater specialist for the South African based Water Research Commission. His own country struggles with a shortage of skills, he explained. “Half of the posts available for geohydrologists and geotechnologists in the public water sector are vacant,” he said.

“One of the reasons is that many graduates are snatched away by private companies, where the salaries lie higher. In addition, between 20-30 percent leave the country, for the same reason.”

The Water Dialogue took place from May 27-28 and aimed to increase understanding with regards to groundwater and the role it can play in improving lives in the SADC, which comprises14 countries including Angola, Botswana, Lesotho, Malawi, South Africa, Swaziland and Zimbabwe.