Q&A: About Peas in a Pod 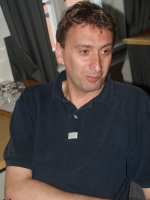 The question was put to Paolo di Croce, secretary-general of Slow Food International, who spoke about the challenges ahead for "good, clean and fair" food, and the movement itself.

IPS/IFEJ: The Slow Food movement presents itself as a defender of biodiversity. But what exactly have good cuisine, tradition and culture to do with coral reefs, polar bears and rainforests? And what has the movement done to contribute to protecting biodiversity? PAOLO DI CROCE: I think that one key issue for good food is the promotion of diversity. Globalisation, the endangerment of species, the standardisation of the markets tend to make things homogeneous, reduce diversity.

It is estimated that all apples that we eat belong to only four varieties. However, hundreds of varieties of apple exist. It is fundamental for the environment, history and culture to preserve the variety of food.

Slow Food has lots of projects around the world to fight against the extinction of species. For example, there is a Slow Food project in the Amazon rainforest to protect the Brazil nut (Bertholletia excelsa), which grows on 40-metre trees in indigenous communities. We are trying to create markets for the nut, to preserve its existence.

Another reason to preserve biodiversity is because we all are personally affected by the issue. For example, if we continue to eat tuna at this rate, in a few years there will be no more tuna.

Food is fundamentally related to agricultural diversity. Wolves and polar bears are not our main priority, but people who are associated with us care about them too because the ultimate goal is to preserve our cultural identity and our environment, including wild species. In fact, we also have programmes that have to do with traditional music and clothing, indigenous languages, etc…

IPS/IFEJ: At the summit of the Group of Eight (G8) most powerful countries, held this month in the Italian city of L'Aquila, they spoke of "mobilising 20 billion dollars over three years" to fight the food crisis, and it was said the money could be used to promote agriculture rather than as traditional aid. What was your reading of that announcement? PDC: I try to see the positive aspects in everything. In L'Aquila they discussed biodiversity, they committed more money to agriculture. This is all positive. Not only the G8 countries (Britain, Canada, France, Germany, Italy, Japan, Russia, the United States) but everyone else on this planet realises there is a huge risk if we do not do anything about the food crisis.

But we have to wait and see whether this investment is good, clean and fair. We now have an opportunity to influence how this money is used. The current system has failed. Look at the number of people suffering from hunger, at the financial crisis, at the health crisis in rich countries: obesity, diabetes, cardiovascular problems…The food production industry created by this system has to be changed. We all have the right to good, clean and fair food.

Also, I think it is wrong to respond to the food crisis with "crisis money," because it has been 20 years in the making, it didn't happen overnight. FAO (Food and Agriculture Organisation) and other United Nations agencies talk about an increasing number of people who suffer hunger and malnutrition. We have to change the model that caused this situation, not patch up the gaps with some crisis money.

IPS/IFEJ: During the summit, Oxfam International released a report, "Suffering the Science: Climate Change, People and Poverty", which shows that changing seasonal patterns are already affecting the ability of farmers to plan the sowing and harvesting of crops. The consequences will be millions of people suffering food shortages and forced to give up traditional crops, possibly leading to social upheavals such as mass migration. What do you think? PDC: Of course, climate change has an enormous impact on agriculture, and therefore on people. Entire populations will have to move away from their territories. As temperatures get warmer in Sweden and Norway, we have seen Sami communities move along with reindeer herds, on which they depend. Reindeer are abandoning their traditional habitats, moving north, and so are the Sami.

Traditional crops can be a tool. In Mexico we have a project to grow amaranth, a traditional cereal that was abandoned as a crop when the Spanish Conquistadors arrived. This crop's nutritional value is important, and the good thing about it is that it can grow in dry areas. We are trying to replant amaranth as an alternative to maize, which is very dependent on water.

IPS/IFEJ: Slow Food says we can be co-producers, not just consumers, by being informed about how our food is produced and supporting those who produce it. But producing and consuming good, clean and fair food is much more expensive. Michael Pollan, author and co-narrator of the documentary film "Food, Inc." wonders why 99 cents can buy a cheeseburger but not even a head of broccoli? The Slow Food movement has been criticised for being elitist… PDC: We have to start by making a serious analysis of two issues. One is the percentage of our income that we devote to food. An interesting figure that comes from a U.S. survey shows that in the 1970s, families spent about six percent of their income on healthcare and about seven percent on food. When they did the same survey recently, they discovered that U.S. families now spend about 15 percent on healthcare and 10 percent on food. The expenditure on food has not increased much, but spending on health has more than doubled.

There is probably a correlation. You have to consider all the excess costs related to a deficient diet in terms of health: the money people spend on nutritionists and doctors. I feel that 10 percent of a household income on food is not enough, especially if you compare it with other expenses, like mobile phones.

The other thing is the real price of food. There are lots of externalities to fast food. I have mentioned healthcare. But there is also the environmental cost of the current food industry, which we are paying with taxes that go to repair environmental damage or to finance subsidies, and that the next generation will continue to pay. Cheap food is only possible on subsidies, and as long as society picks up the environmental bill.

In Italy in 2008, one of the products whose sales grew by 10 percent was pre-washed salad. If you compare prices with the salad you buy in a local market, you realise that the pre-washed is eight times more expensive. And it is less environmentally viable because it comes in a plastic bag.

If you take 100 grams of potato chips, for example, it is nine times more expensive than going to the local market and cooking potatoes with extra virgin oil. Nobody will say fried potatoes are elitist.

Finally, there is the issue of the food we waste. In Italy we throw away about 22 kilograms of food every second.

If you add what you spend without knowing, the health and environmental externalities and the waste, this system is unsustainable. Instead, you can have good, clean and fair food without paying so much.

IPS/IFEJ: But this message is not exactly mainstream. Don't you feel frustrated? PDC: In the last five years I have seen a lot of changes. Everywhere I go now there is more interest. I am not talking about the World Bank, but about normal people, who are the ones who can change the world, the "co-producers."

The day we all decide to eat fresh and local, to eat less meat… with these, simple daily choices we will have a revolution. But this has to be massive. It is fundamental to work with other organisations, with whoever believes eating different is possible. And one day we will able to change the system.

* Miren Gutierrez is IPS Editor-in-Chief. This story is part of a series of features on sustainable development by Inter Press Service (IPS) and the International Federation of Environmental Journalists (IFEJ), for the Alliance of Communicators for Sustainable Development (www.complusalliance.org).