LUANDA, Aug 18 2009 (IPS) - Free primary education for all is an Angolan government policy, but unfortunately this has not translated into a reality that sees all children receiving education. 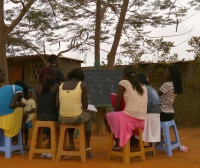 Classes offer girls aged 10 to 18 an accelerated learning programme that covers two grades in one year to make up for lost time. Credit: Louise Redvers/IPS

About one third of the country’s boys and girls do not attend school, believes international non-governmental organisation Save the Children. Decades of civil war destroyed many of Angola’s schools, and investment in teacher training ground to a halt.

After the end of the war in 2002, the situation slowly started to change as high oil prices caused an economic boom in oil-rich Angola. Some of the profits are being converted into investment in education.

The government claims to have recruited and trained more than 70,000 teachers, and glossy videos shown on state television tell of an ambitious programme to rebuild hundreds of schools destroyed during the war and train up more teachers to work across the country.

Despite these efforts, however, the demand for education is not being met, and under-qualified teachers are taking on up to 60 pupils per class. This lack of capacity means that although schools don’t charge fees, some teachers have been known to accept financial or other gifts to guarantee pupils’ enrolment. With the average Angolan family having five or more children, few can afford to secure all their children places.

Girls, it seems, are the biggest victims, often missing out on their chance for education because they are kept at home by their parents to run the household and look after siblings.

“When my father died, my life stopped and I had to stop going to school to help my mother,” said 15-year-old Aminosa Miranda, who has recently started attending classes again. “Now I’m here studying again, and I really like it because I have learnt how to do lots of things, like make baskets and do crochet,” she added.

The fact that girls are expected to help with household responsibilities is opening up a gulf in literacy rates between the two sexes. According to 2007 figures from the United Nations Children’s Fund (UNICEF), 84 percent of boys and only 63 percent of girls were literate.

In addition, high teenage pregnancy rates are perpetuating the problem, trapping many young women in a life of poverty. More than half of Angolan girls between the ages of 15 and 19 have at least one child, noted a United Nations Development Programme draft report in 2009.

“There is a definite gender inequality,” Douglas Steinberg, national director for Save the Children in Angola, told IPS. “What we are finding is at the first enrolment and in the early grades, it’s pretty equal in terms of boys and girls. But by fourth grade, we are seeing a lot more girls dropping out, often because of family pressures and taking on household responsibilities.

“And many girls who do make it to middle school are getting pregnant and drop out anyway,” he added.

Girls who drop out while still barely literate or numerate have little opportunity of improving their economic situation and mostly end up as informal street traders.

Dominga Carla Consumala, a teacher in Cazenga, one of Luanda’s poorest and most overcrowded neighbourhoods on the edge of the capital, works at the Adolescent Girls’ Education Project that gives girls who have dropped out of school a second chance.

She says the cycle of girls staying out of school and getting pregnant had to be broken: “We are fighting to change this. Our country is in peace now. There are lots of opportunities to work and if girls don’t study, they won’t have a future,” said Consumela.

The classes, for girls aged 10 to 18, offer a free of charge, accelerated learning programme that covers two grades in one year. There are also additional literacy classes held in the evenings for those who don’t have time to attend during the day.

As well as basic literacy, high up on the curriculum are questions of sexual and personal health, as well as nutrition. Teenagers who have children can bring them to the classes, where they are being looked after while the young mothers are taught.

Apart from school education, the girls learn to make bags and household linen to generate a small income. “The idea is to give the girls skills for the future,” Consumala explained. “So they can have a sustainable income when they leave school.”

For these girls the classes are a second chance at life. One pupil, Maria de Fatima Manuel Antonio (16) said: “I had measles and it affected my memory, so I stopped going to school. But then I found out about these classes and it’s helping me learn to read and write again.”

Aminosa and Mara are among 490 girls who are part of the programme. This, of course, only scratches the surface. With nine million people under the age of 18 and three million under the age of five, who all need education, pressures on Angola’s school system are going to grow.

The challenge has been recognised by government, which has pledged one third of its 2009 $33.3 billion budget on social spending, including education.

But Steinberg remains cautious. “There’s been huge improvement and investment,” he said, “But the problem is that the quality of education is still quite low. A lot of the teachers don’t have a lot of education themselves, and they haven’t been adequately trained.”

He believes Angola won’t be able to turn around the education system in the next couple of years, as government promises. “Two or three years is too short to see major improvement. I think we’re really looking at a much longer-term transition to the education programme.”