SANTO DOMINGO, Dec 2 2009 (IPS) - Dominican organisations focused on the rights of women are bringing in assistance from all over Latin America to aid them in their fight against Article 30 in the recently approved constitution which states that the right to life is inviolable from conception until death. 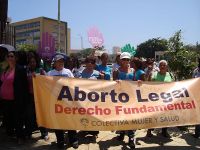 Ahead of the formal signing of the constitution by President Leonel Fernandez on Dec. 6, women’s rights leaders from Chile, Mexico, Peru, Nicaragua, Brazil and Uruguay met with local leaders at an all day forum here and related the experiences of campaigns in their respective countries.

The Nov. 24 forum is only the first of several that will be held across the hemisphere, including one in California in which Alice Walker will be a keynote speaker, followed by conferences in Argentina, Brazil and Mexico. Margarita Zapata, of the Zapata Family Foundation in Mexico, opened the conference, saying that this initial conference had been planned for the Dominican Republic in order to honour the Mirabel Sisters, martyrs for justice, for whom the International Day Against Violence to Women is named.

Zapata said that all over the region legislators were exercising their political power against the wishes of the majority of their population, the women. Observing that while most statistics on gender violence reveal that much of it is family based, the violence of the state against women is strong and persistent.

She roused the crowd of 200 women with the statement that: “It is unjust that so few can decide so much for the lives of so many!”

A leader of one of the local organisations, CEAPA, Margot Tapia, expressed her fears about the effect of Article 30. “With the passage of this amendment, the violence against women will increase. There is already a great deal of violence against women in this country, but now the state itself is making it worse. A woman who becomes pregnant from rape will not only have the violence of that act itself but will also have the violence of being forced to keep the pregnancy, which is a violation of her rights. A recent Gallup poll here showed that the majority of the people in the Dominican Republic wish this article changed. The people here support abortions in the case of rape, incest or to save the life of the mother, all prohibited now.”

Those in opposition to Article 30 are careful to limit their discussion of abortion to only those circumstances, rape, incest, and risk to a mother’s life, and not to expand their demands to any sort of free access to abortion. Most acknowledge that abortions are readily available in the Dominican Republic to women who have the means to pay for them and that only the poor will be placed at further risk.

Medical authorities recognise that death from illegal abortions is one of the main contributors to the high rate of maternal mortality here. The Dominican Republic provides free medical assistance to Haitians who come here and many of these pregnant women, sometimes estimated as high as one third of the deliveries here, have often had no prenatal care and poor nutrition. While the maternal death rate has fallen dramatically over recent years from 230 to 160 per 100,000, the fear is that this number will increase.

Mejia Chalas, from one of the leading women’s organisations, Ce Mujer, said: “We have not lost any funding because of our position. No one has told us to be quiet. Both our Board of Directors and members of our general assembly have been demonstrating in a very public manner against this measure. We are in 11 municipalities and we have 7,000 women who are organised as community leaders in all these communities. … They are all in agreement that we stand united against this Article 30. The people who passed this do not know the reality of the lives of women. We wish them to know this reality and to listen to the voice of the majority of the Dominican people.

The strict amendment was passed over the objections of the medical community and even the leader of the opposition party, Miguel Vargas who asked all of his party members, the PLD, to vote against the amendment, saying that a vote for the amendment could turn his party into a “party which is an enemy to women.” Nevertheless, only two members of his party were among those 34 votes cast in opposition, versus 128 for the controversial amendment.

Josefa Castillo, one of the two members of the opposition who voted against the amendment, stated in her address to the Congress on this issue that while she is Catholic, that church has held more than one position on the subject over the years and that their position has no biblical basis, and that this subject rests inside the space where each person meets with God. According to Castillo, the state has the responsibility to protect the lives of mother’s who are at risk.

She holds out no hope that the new constitution will not be signed by President Fernandez as scheduled on Dec. 6th. “We always took the stand that this article should never have been put in the constitution. Now we are facing many years of struggle to strengthen the rights of women here in this country.”