ACCRA, Jan 19 2010 (IPS) - Juliana Kweais has a small scar on her bottom lip, from the first time she witnessed an abortion. The sharp blow to her mouth was delivered by her grandmother, after the then-13-year-old Kweais had asked why her auntie had given “birth” to a bloody sack. 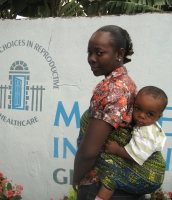 Kweais’s eyes glaze over as she recalls that painful night, almost 20 years ago. Her aunt had been unmarried, and their family too poor to support another child.

By swallowing a herbal medicine of ground stones, and abrototo, pepre, and hentea – leaves mostly found in the forests of rural Ghana – her aunt went into labour, she recalled.

Non-medical abortions are frequent in Ghana, where abortion is illegal. Yet, as more people witness the suffering and deaths of women who’ve attempted unsafe abortions, more international organisations are trying to provide birth control, or to exploit legal loopholes to carry out abortions.

In Ghana, abortions are rarely permitted, and only in situations of rape, incest, or risk to the life of the mother or child.

Rather than pressure the government to legalise abortion, groups of health experts are working toward making medical abortion available to Ghanaian women in various circumstances that could allow the government to look the other way.

A clause in the law that allows abortions in cases where childbirth might cause “injury to (the mother’s) physical or mental health,” gives such clinics an opportunity to provide safer medical abortion services in circumstances where having a child could cause mental anguish.

But government officials have warned that only physicians, not advocates, will be allowed to decide what constitutes “anguish.”

Information Minister Zita Okaikoi said in an interview that “there should be no abortion because a girl wants to finish her education. Abortion is not legal, and we are by no means changing it.” Girls have been known to drop out of school if they get pregnant.

Marie Stopes’s operations manager, Ebenezer Aryee, said “ignorance and lack of resources” fuel the unsafe abortions. The organisation is tackling this, he said, by providing inexpensive family planning – and medical abortions when necessary. The procedure costs 25 dollars. Condoms are free at the clinic, and birth control pills and similar shots cost only 35 cents.

Ghana has a high maternal mortality rate, a measure that reflects a woman’s risk of dying during pregnancy, childbirth or a month afterward.

Ghana’s health minister, Major Courage Quashigah, has declared maternal mortality a national emergency. While the exact number of deaths resulting from unsafe abortions is disputed, some advocates believe it is responsible for 20 to 30 percent of maternal deaths here.

“Even one maternal death is unacceptable, if that women was your mother or sister,” said Vice President John Dramani Mahama, after a screening of a reproductive health documentary here in the summer of 2009.

When pressed on the idea that safe abortions should be more widely available, he said, “I believe it is important to create avenues for those who want it to get it.”

Activists aren’t optimistic that his sentiments will translate into a change in the law. And they aren’t pressing for it, either. But they do want the law amended so that doctors who perform abortions will be protected from potential prosecution. Many doctors fear severe punishment, such as life in prison, if a procedure injures or kills a patient.

Many women say the few doctors who would quietly perform an abortion charge as much as $500 – several months’ salary for many Ghanaians. Others hesitate due to their religious beliefs.

Despite the traumatic incident she experienced as a teenager, Kweais, now 31, claims she has had 10 non-medical abortions herself, by using various concoctions. She said she kept becoming pregnant by an abusive boyfriend she was trying to leave.

“I feared going to the hospital,” she said. “That they would say ‘no’, and then arrest me.”

*Special to IPS from NYU Livewire