HARARE, Jan 21 2010 (IPS) - Death threats allegedly made by a senior police officer to a journalist and the arrest of a photographer, all in the space of a few days, have heightened fears of a new onslaught on the country’s media. 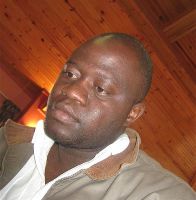 Kwenda had “named and shamed” the policeman in a story published in The Zimbabwean newspaper. The story alleged that Makedenge’s late wife’s relatives had demanded to see the note she had allegedly left after she committed suicide.

After spending the whole day reading articles about the violation of journalists’ rights in the Index on Censorship 2009 Review, it never dawned on Kwenda’s that by the end of that very day, he would be going through a similar experience. It seemed so unlikely that what he thought were rather long lists of journalists who had been harassed, incarcerated and killed would get longer with the addition of his own name.

“I was preparing to get my weekend into swing,” said Kwenda, a freelancer who writes for IPS and The Zimbabwean newspaper, among others. He is also the director of Artistes for Democracy in Zimbabwe Trust (ADZT), an initiative that uses artistes to campaign for civil participation in democratic processes in the country.

“I received a call at 7.15 pm from an unknown number while having a drink with a friend at a hotel in Harare. On the other end of the line was a male voice, and it was clear to me that this was none other than the senior police officer I had named and shamed in a story I wrote for The Zimbabwean newspaper,” Kwenda alleged.

Much to the surprise of his colleague and other patrons at the hotel’s bar, the burly Kwenda started trembling. And it was clear that something was wrong.

“The man told me in a very harsh and angry voice that: ‘Kwenda. You are not going to last this weekend’. I failed to get a chance to make head or tail of the essence of his phone call, he was hurling all sort of profanities and repeatedly reminding me that I was going to die before people at my church finish their evening Sunday prayers.”

Kwenda is generally viewed as a brave journalist among his colleagues, but after the call, he was just out of sorts. Having covered some of the harrowing experiences of people who have implicated his alleged caller, Kwenda did not need anyone to warn him of what was likely to happen after the call. Makedenge’s name has featured prominently among officers involved in the abduction of activists in the aftermath of the March 2008 elections.

“I have never felt so afraid but on the day in question I was left trembling. I was left with no option but to think of a way out,” he added.

Earlier in the day, Kwenda says he had received numerous calls from a suspicious character who claimed she wanted to give him an exclusive expose related to a story he had written for The Zimbabwean.

“At that point I realised I was in for a trap. I told her to put her information on the e-mail of the newspaper. She insisted on a face-to-face meeting,” said Kwenda.

And that very evening, Kwenda was on the next flight out of Zimbabwe. His destination: South Africa where he is currently hiding.

“Fleeing Zimbabwe was the only way out for me after receiving very specific death threats from a senior police officer. All this is happening sadly at a time when we should be celebrating a new democratic dawn for Zimbabwe,” said Kwenda.

However, police spokesperson Wayne Bvudzijena said despite Kwenda’s allegations police will not investigate the claims based on media reports. He said Kwenda was required to open a case in order for police to investigate the matter.

“In the first place he should have made a formal report so we could investigate it. Should there be any threats outside the law made against him (Kwenda) they should be investigated,” Bvudzijena said.

He added that only Kwenda could open a case regarding the death threats and would have to return to Harare to do so. Bvudzijena said even though Kwenda feared for his life, if he laid a complaint, police would not be able to protect him.

“We don’t have that capacity to provide security to individuals. He would have to provide his own security,” Bvudzijena said.

He also expressed scepticism that death threats had been made against Kwenda. “I would like to know why he should be threatened, particularly at this time. What is so drastic why anyone would want him dead?” Bvudzijena asked. When IPS informed him about the article Kwenda had written concerning Makedenge, Bvudzijena said he was unaware of it.

“Fleeing does not help anyone. My suspicions are that it is to raise some (negative) perceptions about the whole issue. We have investigated police officers before,” Bvudzijena said.

Three days after Kwenda fled the country, another freelancer, photographer Andrison Manyere was arrested while covering a demonstration in the capital. This is the second time Manyere has fallen victim to the machinations of state security agents. In 2008 he was abducted and dragged to the courts at the height of political violence along with opposition party members and human rights activists. This spate of arrests are the very same ones that Makedenge’s name had been linked to.

Kumbirai Mafunda, a journalist who is also a spokesperson for the Zimbabwe Lawyers for Human Rights (ZLHR) said the threats on Kwenda’s life and Manyere’s arrest were “clear signs that we have not moved an inch in terms of media reforms”.

“What happened to our colleague Stanley Kwenda is really worrying,” said Mafunda. “As journalists we thought that threats and arrests of journalists were things of the past. It is really sad that in this era we still have journalists being threatened and hounded out of the country.”

Mafunda said there was need for the inclusive government to show commitment to ending the violations of voices perceived to be against certain forces in the system.

“We honestly do not expect these things to continue even in this day and age,” said Mafunda.

This was the general sentiment at the Quill Club, the meeting point for journalists in Harare.

“We do not take these threats lightly, because we have seen it in the past. This is a sign that the profession is in danger, and the government needs to do something about it,” said one journalist at the club who requested anonymity.

Secretary General of the Zimbabwe Union of Journalists (ZUJ), Foster Dongozi said they had since launched an investigation into the matter, in collaboration with the police and other players in the media industry.

“We have set up a team which will investigate the harassment of our fellow member and we want to establish whether the threats were done at individual or official level,” said Dongozi.

“But whatever the case might be, we are saying harassment of journalists by the state should come to an end. We expect the state security to protect its citizens not victimising them like what has been happening here for the past decade.”

Dongozi said the incident was unfortunate as it came at a time when everyone was now “expecting media reforms and respect to journalists”.

In a statement, the Media Institute of Southern Africa (MISA) Zimbabwe chapter condemned the threat on Kwenda, saying this was “yet another serious threat to media freedom and the right of journalists to conduct their lawful professional duties without fear or hindrance from any quarters”.

“MISA-Zimbabwe urges the inclusive government and the Police Commissioner General to unequivocally guarantee the safety of journalists and to assure Kwenda of his security pending full investigations into the alleged threats,” reads the statement.

The burly scribe is conspicuous about his absence from the Quill Club. The general concern among colleagues is that something bad might happen to him. But he believes all is under control, at least for now.

“I am safe and sound in my hiding place,” he told IPS.

When the members of the Zimbabwe Media Commission were announced in December, hopes were so high among journalists that this marked a beginning of better fortunes for the media industry. They even dubbed the New Year “twenty-turn”, hoping things would turn for the better. But for Kwenda and others, they seem to be turning for the worse.

IPS Africa was unable to reach Makedenge for comment.