SEATTLE, Feb 9 2010 (IPS) - Reckless greed on Wall Street is a dog-bites-man story. Still, the renewed feeding frenzy of the alpha dogs of finance in the embers of the bonfire of their own vanities has inspired amazement and disgust across the political spectrum. 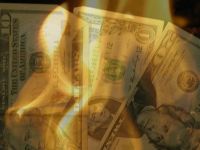 Despite the damage it yet may cause, though, the spectacle does seem to be helping to disarm some of the banksters’ ideological weaponry. In the debate over why the financial system collapsed and how to rebuild it, economic assumptions that have enjoyed hegemony for the past 30 years are being questioned, and a swelling chorus is supporting a return to stronger regulation.

David Stockman, President Ronald Reagan’s director of the Office of Management and Budget, recently weighed in: “The baleful reality is that the big banks, the freakish offspring of the Fed’s easy money, are dangerous institutions, deeply embedded in a bull market culture of entitlement and greed.”

Stockman welcomed President Barack Obama’s proposed tax on banks because its message is that “big banking must get smaller because it does too little that is useful, productive or efficient.”

While the United States economy remains mired in a weak, jobless recovery, the financial sector has used its political clout and government largesse to once again go for the gusto. In the third quarter of 2009, according to economist Dean Baker, finance grabbed 34 percent of all U.S. corporate profits, a far bigger share than at the peak of the housing bubble.

It was a "mistake" to believe that the self-interest of banks would protect their shareholders and equity, Alan Greenspan told a congressional hearing at the time of the financial crash.

In the man-bites-dog story of the crisis, the former Federal Reserve Chairman said he had found "a flaw in the model … that defines how the world works." He described his state as "shocked disbelief."

"Economist this recession, but I promise I'll do better next time."

Greenspan and most of his conservative colleagues remain far from intoning in unison, "We're all Keynesians now," as President Richard Nixon declared in 1971.

Yet the influence of the neo-classical orthodoxy that has dominated economics and politics for the past 30 years has been slipping.

And the ideas of British economist John Maynard Keynes, which provided the theoretical underpinnings of the New Deal and post-World War II prosperity, are finding renewed traction.

During the Great Depression, Lord Keynes asserted the need for governments to use fiscal and monetary policy to counter the harm done by economic cycles and to correct market failures.

John Cassidy of The New Yorker found that the Great Recession has fomented dissent in the long-time headquarters of market fundamentalism, the University of Chicago.

Conservative economic thinker and judge Richard Posner criticised some of his Chicago colleagues for underestimating the magnitude of the financial crisis and for exaggerating "the self-healing powers of laissez-faire capitalism."

He called for "a more active and intelligent government to keep our model of a capitalist economy from running off the rails."

One of the leaders of the Keynesian renaissance has been Joseph Stiglitz, the Nobel laureate and former World Bank chief economist. He chaired a United Nations commission on international monetary and financial reforms that advocated a global stimulus package.

"The United States should go and study what good central banks do, in India and elsewhere, because they actually did avoid the excesses that marred American financial markets," Stiglitz wrote.

"Markets are not self-regulating. There is an important role for government to try to make the market economy work. "

One major pump inflating the housing bubble, Stiglitz suggests, was that a 30-year increase in economic inequality led many Americans to borrow increasing amounts simply to maintain their standard of living.


In the political arena, too, Wall Street is back in force. As Congress debates proposals for financial re-regulation, the financiers have cried “Havoc” and let slip the canines of K Street against the reforms.

At Goldman Sachs, the leader of the pack, any embarrassment over the savaging of the global economy is well-hidden. The investment bank, popularly dubbed “Goldman Calf”, reportedly has given its employees some 13 billion dollars in bonuses for 2009. That nearly triples its largesse in 2008 when, according to the Wall Street Journal, 953 employees received bonuses of over one million dollars each.

The bank reported earnings of 13.4 billion dollars for 2009, nearly matching the 15 billion dollars combined total of the five other biggest banks. Its net profit margin was 23.85 percent.

Goldman received 10 billion dollars in funds from the U.S. government’s Troubled Asset Relief Programme in 2008, which it paid back with interest in 2009. The firm also benefitted from other forms of government generosity, including an estimated 12.9 billion dollars as a counterparty of AIG.

The failed insurance behemoth used bailout funds to pay off credit default swaps and other complex wagers on bond markets at allegedly inflated values to Goldman and several other U.S. and European financial giants. For some time before the crash, GS had reportedly been betting against the mortgage market.

The apotheosis of Goldman Sachs has relied on a revolving door between the firm and lofty precincts of the federal government. Henry Paulson, the George W. Bush administration’s secretary of the Treasury responsible for TARP, formerly served as the firm’s CEO. Robert Rubin, Treasury Secretary under President Bill Clinton, and many other power brokers in both major parties are also alumni.

A long year after the industry’s near-death experience, Goldman’s glass is either full or overflowing, depending on how you look at it. So is popular anger against it. Rolling Stone magazine writer Matt Taibbi celebrated the investment bank as “a giant vampire squid wrapped around the face of humanity, relentlessly jamming its blood funnel into anything that smells like money.”

Satirist Andy Borowitz reported tongue-in-cheek that Goldman was in talks to buy the Treasury Department. He quoted an apocryphal Treasury spokesman as saying that the merger would create efficiencies for both because of the high volume of employees and money already flowing back and forth between them. The only hard part, the spokesman said, “is trying to figure out which parts of the Treasury Department we don’t already own.”

Belatedly, Obama and the Democrats seem to have decided that popular anger on the right and the left churned up by the financial industry may be a political wave they can ride.

In December, the House of Representatives passed a bill that would create an independent financial protection agency for consumers, a measure long lobbied for by Harvard law professor Elizabeth Warren, director of the Congressional Oversight Panel for the bank bailout.

The legislation would also increase banks’ capital requirements and limit their leverage, the extent of their reliance on borrowed funds. And by requiring lenders to hold on to some proportion of the loans they make, the law would restrict securitisation, the practice of bundling mortgages into complex derivatives that frequently have turned toxic, dragging down financial institutions that hold them.

In the Senate, though, prospects for 60 votes to break a potential filibuster look dubious. Republicans appear to be nearly unanimous in their opposition to the reforms.

In the wake of the loss of a Democratic Senate seat in Massachusetts, Obama has gone on the offensive on the issue. The president urged the Senate to approve the financial consumer protection agency, and proposed a new tax of 0.15 percent on the non-deposit debts of the biggest financial conglomerates, to recover all taxpayer losses from the bailout.

In a Jan. 21 speech, he called for structural reforms of the financial system, including limiting the size and financial risk-taking of banks.

On Jan. 31, Paul Volcker, chair of his Economic Recovery Advisory Board, vigorously championed the president’s proposals in an opinion piece in the New York Times.

Volcker, chairman of the Federal Reserve Bank under Presidents Carter and Reagan, reached back two centuries to recall that Adam Smith had advocated for keeping banks small. He proposed regulations to eliminate the possibility of a few banks growing “too big to fail.” And he echoed the president’s complementary proposal to once again restrict commercial banks from involvement in high-risk activities such as hedge funds, private-equity funds and proprietary trading.

An earlier firewall between commercial and investment banks, first erected by the Glass-Steagall Act of 1933, was eliminated by the Gramm-Leach-Bliley Act of 1999.

Volcker also called for a public “resolution authority” with the power to step in when major financial institutions are in imminent danger of failure, take over, and arrange an orderly liquidation or merger.

Although the proposal didn’t address some remaining dangers such as the “potentially viral network of derivatives contracts,” according to financial columnist Gretchen Morgenson, it “moves us closer to resolving pieces of the ‘moral hazard’ issue, that uncomfortable state of affairs that occurs when companies don’t worry about bet-the-ranch risks because they know that someone (usually the taxpayer) is waiting in the wings to save them if they blow it (as they so often do).”

Financial regulation in one country, even the home of the dollar, risks being circumvented by globe-spanning players. Recognising this, other governments are contemplating similar curbs on financial excesses and discussing joint action.

The City of London has given Wall Street a run for its money in the insolvency sweepstakes. Surveying the wreckage, U.K. financial officials are weighing a levy on banks for an insurance fund to cover future cleanups and a tax on financial transactions to limit excessive speculation. France, too, has supported raising international capital requirements for banks.

On a global scale, the International Monetary Fund is contemplating the creation of an insurance fund into which it would require banks around the world to pay.

“The financial sector is creating a lot of systemic risks for the global economy,” Managing Director Dominique Strauss-Kahn told The Telegraph. “It is fair that such a sector should pay some of its resources to help mitigate the risks they are creating.”