ENVIRONMENT: Forests May Depend on Survival of Native People

MONTPELLIER, France, Mar 29 2010 (IPS) - After the failures in Copenhagen to agree on a new climate protection treaty, and more recently at the Doha meetings on trade in endangered species to prevent bluefin tuna from going extinct, indigenous forest communities may offer examples of sensible governance for shared resources on a small planet. 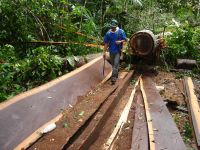 Hundreds of poor Mexican Zapotec indigenous farmers have become owners of a multi-million-dollar diversified forest industry, offering an important model of a community-based enterprise that supports local people and conserves the natural environment, says David Barton Bray, a professor and associate chair in the Department of Earth and Environment at Florida International University in Miami.

The farmers of Ixtlán de Juarez, a forest community in the Sierra Norte mountains of central Mexico, utilise their strong traditional community values and communal ownership of more than 21,000 hectares of pine and oak forest to run a successful business that benefits the entire community.

There is no private property, and rather than establishing a business to maximise profits, the people of Ixtlán, and in other Zapotec communities of Mexico with similar forest-based enterprises, focus on job creation, reducing emigration to cities and enhancing the overall well-being of the community, Bray told participants at the Smallholder and Community Forestry conference here in Montpellier.

“Communities will be more important in the years to come because they can address vital issues that the state and the market cannot,” Bray, an expert on community forests in Mexico and Central America, told IPS.

The survival of much of the world’s forests may well depend of the survival of local communities. A quarter of the world’s remaining forests are controlled by about one billion local people, says Estebancio Castro Diaz of the Kuna Nation in Panama, who is executive director for the International Alliance of Indigenous and Tribal Peoples of Tropical Forests.

“The forest is a supermarket for us, it is not just about timber,” he said.

For those reasons, more than 90 percent of the forests controlled by the Kuna people are still standing. “We need to communicate there are broad benefits to the larger society for local control of forests,” Diaz said.

In sharp contrast to the usual nation-state or private enterprise overexploitation of commonly-held lands, oceans or other resources – characterised as the “tragedy of the commons” – local communities can set and enforce rules to maintain their landscapes, conserve biodiversity and improve livelihoods for the long term, Bray suggests.

The glue and the grease that makes this all work is social capital, he adds. Communal trust, deeply shared values that arise from long experience and knowledge are some of the ingredients of social capital.

In Mexico’s Ixtlán, community service is obligatory but goes far beyond being a “volunteer” as understood in developed countries. Virtually everything in the community is run by local people as part of their ‘duties’ as a community member.

This includes being part of administration, neighbourhood, school and church committees to performing the actual roles of community policeman to municipal president, says Bray. At any one time, 10 percent of the adults are involved and everyone has physical labour obligations that require up to 20 days a year for things like road repair, fire fighting and so on.

All of this is overseen by an assembly of members of the community that meets four times a year in days-long sessions. Here, policy decisions and elections to fill the various roles are made as well as the election of leaders who hold three-year terms. In return community members receive extraordinary benefits compared to other poor regions, including health and social benefits, above-average wages for work in commercial enterprises, access to low-interest loans, old-age pensions and more, he says.

The Ixtlán forestry enterprise employs up to 280 people and includes a tree nursery, saw mill and furniture making factory. About 7,500 of the 21,000 hectares of community forest is under commercial use and certified by the Rainforest Alliance and WWF. That certification illustrates the need for support beyond the community including government, markets and NGOs.

Bray acknowledges the timber harvest, although well-managed, is changing the character of the forest and reducing the number and diversity of species. It’s a tradeoff, he says. The local people need the income but they are managing forests for the long term.

“Done right, timber production can increase forest cover and incomes for local people,” Bray says based on his studies.

Of the 2,300 local communities in Mexico who are involved in timber production, about one-third have their own equipment, saw mills or furniture-making facilities, which is unique in Latin America. Virtually everywhere else timber is harvested by commercial logging companies, often to the detriment of local people and the environment.

In an effort to change this, the World Bank, FAO, IUCN and others have formed a “Growing Forests Partnership” to find ways to support community-managed forests, said Chris Buss of IUCN. Not only is this partnership trying to ensure that indigenous and local people are involved in their national government’s forestry policy, but also to find ways to channel financial investment into local forest management be it for timber, Brazil nuts or other uses.