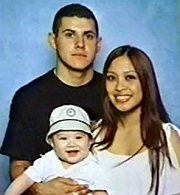 When he died, Jesus left behind a wife and infant son, Erik, who even today doesn’t understand what happened to his father.

“He asks me, ‘Where is my dad?'” Fernando says, choking back tears. “‘Why is my dad not here?’ I try to explain that he is in another place, that he watches over and protects us. But my grandson just cries and says, ‘I need my dad, I want my dad,’ and I don’t have the intelligence to explain to him why his dad is not there.”

Jesus Suarez was 20 years old when he died. A native of Tijuana, Mexico, he immigrated to Southern California with his family in the late 1990s and joined the Marine Corps straight out of high school. When he died, he still hadn’t received U.S. citizenship.

He says the passage of time has not diminished the loss. Instead, it has become more pronounced, even as the Iraq war has receded from the front page to the back page of the newspaper, from the lead story each night on network news to a short weekly segment, overtaken by health care, immigration, and the failing economy.

When Barack Obama was elected president, he lifted a controversial ban, allowing the media to film and photograph caskets of dead soldiers as they arrived at Dover Air Force base, but few media have published those images on a regular basis.

The remoteness of the war in Iraq “produces a feeling of isolation” among families who have lost loved ones in the war, says Ami Neiberger-Miller, spokesperson for TAPS, the Tragedy Assistance Programme for Survivors, a non-profit independent organisation of the military that provides grief support to families.

On Mar. 10, TAPS estimated that the 5,398 U.S military deaths in Iraq and Afghanistan had left 3,779 children without a parent, while 2,669 spouses had been widowed.

The organisation reported that 10,796 parents had lost a child and 4,264 siblings had lost a brother or sister.

“Grief rewrites your address book,” she says. Because most Americans find it difficult to talk about the loss of war, “They don’t ask [about dead loved ones] or [they] change the subject. I think my new baby looks a lot like my brother when he was a baby,” she says, “but I won’t tell other people that because it would make them uncomfortable.”

To help break through that isolation, TAPS offers peer-based emotional support to people who have lost loved ones in the war, pairing up survivors with others in similar circumstances. The organisation also offers a grief camp for children who have lost a parent to the war, helping form a sense of community so the children realise they are not alone.

Fernando Suarez del Solar has channeled grief over his son’s death into political activism. In December 2003, he traveled to Iraq as part of a peace delegation and visited the exact spot where his son died.

“I had the opportunity to meet with families in Iraq who lost two, three, four, five members at the same time,” he said. “These people opened their hearts and doors and gave us a beautiful welcome. It was important for me to show the Iraqi families that many American people do not support this occupation, and that like the Iraqi people who have lost their family, American people have lost members of their family in the war in Iraq.”

Since then, Fernando has paid hundreds of visits to middle and high school classrooms across Southern California where he’s urged students not to join the military. He’s stood at the front of dozens of anti-war marches and founded his own non-profit organisation, the Guerrera Azteca Project, dedicated to countering military recruitment targeting the Latino community.

But such activism has come at a tremendous personal and financial cost. He’s now estranged from Jesus’s mother and widow who believe Fernando’s activism disgraces his son’s memory. And because Fernando has poured his heart and soul into stopping the war, he’s been unable to advance economically. He works as an overnight cashier at a 7-Eleven outside San Diego.