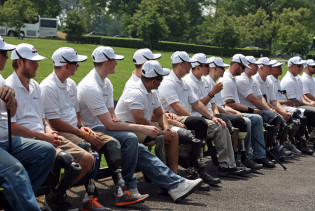 U.S.: Court-Martial for Soldier Who Wrote Angry Song about Stop-Loss

By Dahr Jamail
Army Specialist and Iraq war veteran Marc Hall was incarcerated by the U.S. Army in Georgia for recording a song that expresses his anger over the Army's stop-loss policy. Now he waits to be shipped to Iraq to face a court martial.

By Eli Clifton
Suicides among United States military veterans ballooned by 26 percent from 2005 to 2007, according to new statistics released by the Veterans Affairs (VA) department.

US: Whistleblower Psychiatrist Warns of Soldier on Soldier Violence

By Dahr Jamail
Kernan Manion, a psychiatrist who was hired last January to treat Marines returning from war who suffer from post-traumatic stress disorder (PTSD) and other acute mental health problems borne from their deployments, fears more soldier-on-soldier violence without radical changes in the current soldier health care system.

By Dahr Jamail
According to a soldiers' advocacy group at Fort Hood, the U.S. base where an army psychiatrist has been charged with killing 13 people and wounding 30 in a Nov. 5 rampage, the official suicide figures provided by the Army are "definitely" too low.

By Eli Clifton
Senior military and Barack Obama administration officials have been on a full-court press to preempt an anti-Muslim backlash since the shooting spree by a Muslim soldier at Fort Hood, Texas, but right-wing pundits have wasted no time in characterising Major Nidal Malik Hasan's actions as an act of terrorism by a radical Islamic extremist.

By Dahr Jamail
While investigators probe for a motive behind the mass shooting at the Fort Hood military base in Texas Thursday, in which an army psychiatrist is suspected of killing 13 people, military personnel at the base are in shock as the incident "brings the war home".

BOOKS-US: Soldiers Who Just Say No

By IPS Correspondents
Six months into Barack Obama's presidency, the U.S. public's display of antiwar sentiment has faded to barely a whisper.

By William Fisher
The continuing occupation or Iraq and the growing war in Afghanistan are leaving permanent physical and emotional scars on a whole generation of U.S. soldiers. Not since Vietnam have so many GIs objected to a war, and never have military families spoken out so strongly for withdrawal.

U.S.: "There's No Way I'm Going to Deploy to Afghanistan"

By Dahr Jamail
"It’s a matter of what I’m willing to live with," Specialist Victor Agosto of the U.S. Army, who is refusing orders to deploy to Afghanistan, explained to IPS. "I’m not willing to participate in this occupation, knowing it is completely wrong."

By Dahr Jamail
"But the [George W.] Bush administration was never seriously interested in helping veterans. The sorry state of care for Iraq and Afghanistan war veterans is not an accident. It's on purpose."

By Enrique Gili
In their latest documentary "Soldiers of Conscience", husband and wife filmmakers Catherine Ryan and Gary Weimberg probe the nature of war and the human condition, asking the question: when is killing in combat permissible?

Q&A: "Mistakes Will Continue to Happen When There Isn’t Transparency"

By Stephen de Tarczynski
Not many people want to spend time at Guantánamo Bay. But while studying law at the University of Miami in 2005, Mahvish Rukhsana Khan became outraged to learn of the lack of rights afforded detainees in the "war on terror" and was keen to get involved.

By Dahr Jamail
By using the written word and art, veterans of the U.S. occupation of Iraq are transforming their trauma into a message of both healing and resistance to the failed U.S. adventure.

BOOKS-IRAQ: "We Blew Her to Pieces"

By Dahr Jamail
Aside from the Iraqi people, nobody knows what the U.S. military is doing in Iraq better than the soldiers themselves. A new book gives readers vivid and detailed accounts of the devastation the U.S. occupation has brought to Iraq, in the soldiers' own words.

By IPS Correspondents
You could hear the joy in Patrick Campbell's voice as he reflected on U.S. President George W. Bush's signing Monday of a new GI Bill of Rights for veterans returning home from Iraq and Afghanistan.
Next Page »
ADVERTISEMENT ADVERTISEMENT