LAGOS, Apr 23 2010 (IPS) - “This bill seeks to address the compelling need for us as a nation to have indigenous participation in the industry.” With these words, Nigeria’s acting President, Goodluck Jonathan, signed the Nigerian Oil and Gas Industry Content Development Bill into law. 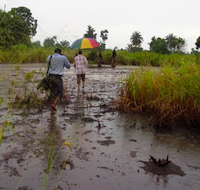 The new law seeks to achieve greater indigenous participation in Nigeria’s oil and gas industry which in the last five decades have been dominated by multinational companies. A wide range of services and products which have been procured abroad must now be sourced locally.

In addition, “all operators and service providers must make provisions for targeted training and understudy programs to maximise utilisation of Nigerian personnel in all areas of their operations. All operators must therefore submit detailed training plans for each project and their operations,” says the new law.

The law has been welcomed as a positive development in Nigeria’s oil and gas industry.

“We are very much in support of the law because we want the oil companies to provide jobs for Nigerians and allow Nigerian companies do oil services related jobs,” Comrade Elija Okubudo of the National Union of Petroleum and Natural Gas Workers told IPS.

“I think the move is the correct one. The oil industry is one of the largest industries in the country but it does not really touch the lives of ordinary Nigerians,” Afam Edozie, a Lagos based venture capital investor with a wide range of interests including the oil industry told IPS.

“Most of the high skilled workers come in from overseas and all the operations take place in the creeks without much value creation. The oil industry should not only be about extraction but it should also provide the opportunity for employment and profit for Nigerians,” he says.

The Niger Delta, source of billions of dollars of oil worth since production began there in 1957, is one of the most underdeveloped parts of the country. To add insult to injury, lax environmental monitoring and profit-seeking by multinational oil companies has led to widespread environmental damage that has robbed the fishing and farming community of the productive resources they previously relied on.

Nonviolent protest of this situation reached a peak in the mid 1990s, but was answered by a brutal military crackdown and the execution of nine leaders of the most prominent activist group, the Movement for the Survival of Ogoni People.

Since then, militants have taken up armed struggle against the government, well-funded by the sale of pirated oil: Nigeria’s oil production has at times been severely reduced by insecurity and diversion of output.

In October 2009, the government and most militant groups agreed to an amnesty programme; thousands of fighters came out of the creeks, but the government’s implementation of a demobilisation and retraining plan was slow.

Activist Onengiya Erekosima fears the truce in the region is temporary because the government is not sincere about the exercise. “You still have cases of kidnappings here and there, in spite of the amnesty program; this is because many militants don’t trust the system.”

“My concern for now is not the new law but how to bring about peace in the Niger Delta region. I have fears for the investors. When there is no safety, when there is no peace, investments may be in vain.” he told IPS.

A spokesperson for the most prominent of the armed groups, the Movement for the Emancipation of the Niger Delta (MEND) says the law does not go far enough.

“The law has not addressed the core issues that led to the violent agitation in the region,” Jomo Gbomo, spokesman for the group, told IPS via email. MEND and other groups in the delta want local communities in the region to control the oil resources.

The group’s senior commanders were among those who participated in the amnesty, but Gbomo insists it still has the capacity for violence. MEND demonstrated in March when it detonated two car bombs in Warri, the second largest city in the oil-producing region.

For local investors trying to gain a foothold in Nigeria’s oil industry, the insecurity will be just one of many challenges to be addressed.

For all his enthusiasm about the changes, Edozie believes it will be a challenge to find the right calibre of local staff to fill the positions the new law will create. “I think there would be initial problems in developing the right staff,” he told IPS. “[But] this problem will be solved in a few years.”

Another problem is the issue of transparency in the government’s allocation of oil blocks to local companies. The new law gives locals priority over their foreign counterparts in the allocation of oil blocks. In the past some blocks were allocated to local companies under controversial circumstances. Some were believed to have been corruptly allocated while others were assigned to unqualified companies for reasons of political patronage.