MOSCOW, Apr 12 2010 (IPS) - Apas Kubanychbek, who hails from the high mountainous area of Ysyk-Ata in the Chuyskaya province of Kyrgyzstan, was involved in the political movements and democratic struggles of the former Soviet republic in the early 1990s. 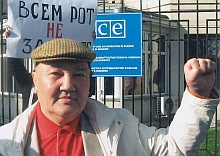 A fierce critic of media suppression, nepotism, corruption and human rights violations in Kyrgyzstan, Kubanychbek spoke with IPS correspondent Kester Kenn Klomegah, at an undisclosed location, shortly after the mass protests that ousted President Kurmanbek Bakiyev and his government in Bishkek last week.

Q: How would you explain or interpret the latest political developments leading to the unexpected change of government in Kyrgyzstan? A: The mass anti-government protest was really an indication of more than a decade of disillusionment and dissatisfaction that accumulated in the political, economic and social spheres from the period of the first post-Soviet president Askar Akayev to his successor Kurmanbek Bakiyev who came to power in 2005 during the Tulip revolution. People supported the revolution simply because they wanted a change, but that popular revolutionary interest was short-lived.

It’s worth recalling that during the Soviet times, Kyrgyzstan was one of 15 socialist republics and it was governed by Moscow. However, after the collapse of the Soviet era, what we have witnessed cannot be described as democracy but mismanagement of state power. Authorities have consistently used state power to suppress opposition voices, limit media freedom and basic rights. There was also hidden and deep-seated corruption.

El-Jurt (People), the political party I founded about eight years ago, alongside other opposition groups has been fighting against injustice and for the welfare of the impoverished in the 5.3 million population in Kyrgyzstan. We really need a better and more democratic society. Governments were not competent to carry out necessary democratic reforms for the building of a flourishing economy. Both the Akayev and Bakiyev governments consisted mainly of close friends, relatives and former communists who strongly and conservatively opposed radical changes and democracy. Thus, what happened a few days ago in my country should be expected and can be described as a grassroots revolution against official authority.

Q: Could you say more about accusations of corruption and infringement of human rights in the country? A: Akayev and his wife Mayram were not held back from the temptation of corruption. He created a corrupt political system where state ministers were appointed on bribes. Fish rots from the head and, seeing Akayev’s style, government officials also took bribes from subordinates.

My party, El-Jyurt, was suppressed because I began to publicly to criticise the embezzlement of Kyrgyz gold (four tonnes) together with the international adventurer, B. Bershtain, the head of the western firm ‘Seabeko Corporation’, and began to put journalists into prisons. I was also arrested for public criticism of government corruption and thrown into prison. In 1994, they prevented my candidacy for the parliamentary election, considering me the most dangerous political opponent.

Today, in Kyrgyzstan executive power is totally struck by corruption, beginning from the president and ending with the heads of regions, law courts, and law enforcement agencies. Corruption over the years has contributed to Kyrgyzstan’s political and economic crisis and rising unemployment. Many specialists, even the unskilled, have emigrated. The level of poverty according to international experts exceeded 80 percent during the years of Bakiyev’s administration. Unemployment led to the emigration of more than two million Kirghiz citizens into the countries of the Commonwealth of Independent States and further abroad.

One interesting fact is that the Kremlin has paid heavily to Bakiyev to remove U.S. military bases in Kyrgyzstan and this issue has links to what is currently taking place, although Russian authorities have described the recent anti-government protests as purely internal.

Q: How do the opposition groups, such as yours, feel about the ousted government’s tight control over the media? Do you think the human rights situation got worse during the Bakiyev administration? A: It was really beyond description, worse than any of the ex-Soviet republics. I was supported by people very strongly for the 2005 presidential elections in contrast to Bakiyev. I appeared on the Kyrgyz national television as the future presidential candidate and people supported me as a hero of the emerging revolution. Unfortunately, Bakiyev did everything through the Central Election Commission (CEC) of the country, illegally excluding my name from the list as presidential candidate and using the entire administrative resources to win the elections. This was just one classical example how democracy was stifled with members of opposition languishing in deplorable conditions in prison while others fled abroad.

Q: What measures do you suggest should be put in place in pursuit of democracy in your country? And what lessons are there to draw from the Kyrgyzstan case? A: The new provisional government has to rebuild or restructure the state and civil institutions by flushing out the remaining conservatives, bringing in more active, young and progressive-minded specialists. As chairman of one of the largest opposition parties, I can testify that Bakiyev suffocated media freedom in Kyrgyzstan using authoritarian methods, just as his predecessor did. For example, the West, for some reasons, banked on the former officials from the executive branch who erroneously assumed that they have experience in state administration. Viktor Yushchenko of Ukraine and Mikheil Saakashvili of Georgia are examples of leaders who have disappointed their people and their countries.

The new authorities have to learn from the negative tendencies of the two previous regimes. They should do away with authoritarianism, follow democratic principles and change the atmosphere of intimidation for Kyrgyz people. I will strongly appeal to democracy loving countries in Europe and the West to help opposition groups including El-Jyurt.

In summary, authorities in Kyrgyzstan must establish international standards and norms of democracy, observe fundamental human rights, establish checks and balances, ensure the independence of the judicial authority, the freedom of the press, fight corruption and work towards democratic elections within the shortest possible period.