LUANDA, May 15 2010 (IPS) - Think small to overcome big problems – that was the message to African governments being urged to do more to increase food security and reduce hunger and malnutrition on the continent. 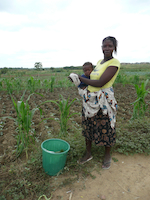 Angola has invested heavily in rural development, but some say programmes should be adjusted to better support small-scale farmers. Credit: Louise Redvers/IPS

Jacques Diouf, Director-General of the United Nation’s Food and Agriculture Organisation (FAO), told delegates at the regional conference for Africa staged in Luanda in the first week of May that there needed to be a focus on “small producers” and “family farming”.

His message was welcomed by delegates from a variety of African civil society groups, farmers’ co-operatives and rural campaigners who gathered in Luanda for a parallel meeting in order to lobby FAO and government policy makers to support small-scale producers.

In 2009, Angola’s oil-dependent government, badly hit by the plunge in oil prices due to the global economic crisis, launched a major stimulus plan to improve farming opportunities and improve services outside of major towns and cities.

The idea was to stimulate the non-oil economy by returning the agricultural sector to its pre-independence profitability when Angola was a major producer and the world’s fourth biggest coffee exporter.

Another key aim for the government was to create rural jobs and long-term sustainable industries, while also reducing reliance on imported food and boosting food security.

One billion dollars of investment, announced with much fanfare in Angola’s state media, also focussed on repairing roads to boost access to markets, introducing new irrigation technologies and promoting techniques such as crop rotation and storage.

Ricardina Machado is director of Co-operatives Support at the National Union of Angolan Rural Workers' Associations, which works in partnership with the government but is independently funded.

She said Angola's micro-credit system will take time to find its feet, but is an excellent way to help small-scale farmers access products like seeds and fertilisers.

The government scheme follows on from other smaller credit initiatives led by the World Bank and international NGOs working to try to reduce Angola's rural poverty rate of 94 percent.

Machado admitted the high prices of imported products like fertilisers - from $45 per 50 kg bag - meant even with credit schemes, small-scale producers struggled to access products they needed to boost their productivity.

But she said commercialising small-scale production was an even bigger challenge.

"It is not easy for many people to transport their products to market at the moment because of bad roads or a lack of places to sell," she explained.

"But this is something the government is working on and we are seeing changes, for instance there are now tomato processing plans in Namibe and Huila and the roads are getting better all the time."

A key weapon in driving commercialisation of locally-grown products was supposed to be the Programme of Restructuring Logistics and Distribution of Essential Products to the Population, known by its Portuguese acronym, PRESILD.

The idea was to create a supply system for the state-owned supermarket chain Nosso Super, but due to inconsistencies and high costs of local production, much of the food found on the shelves of Nosso Super comes from South Africa and Brazil.

Local markets run by PRESILD have also in some people's eyes failed to take off because the prices of fruit and vegetables are fixed allowing the informal market to undercut and outsell.

Calundungo concluded: "We need to rethink this scheme because it's not working.


Twelve months later, even though the official budget allocation for agriculture still accounts for less than two percent of the country’s 36 billion U.S. dollar public spending plan (as opposed to the 10 percent recommended by FAO), Angola appears to be on the right track.

Economy Minister Manuel Nunes Júnior reported in April that the agricultural sector expanded by 29 percent during 2009. The March 2010 Angola Country Brief from GIEWS (Global Information and Early Warning System), noted a maize harvest of 1.2 million tonnes, up 87 percent on the 2008 figures, and the first surplus in two decades.

But Sergio Calundungo, who heads Angolan NGO Action for Rural Development and Environment (known by its Portuguese acronym ADRA) says the government growth figure doesn’t tell the whole story. He cautioned that the majority of investment has been in large-scale infrastructure and public/private initiatives, not schemes benefitting small-scale famers.

“It’s hard to know exactly how these growth figures are calculated. And even if there was a 29 percent growth, it has come from a very low base,” he said.

“Our concern is that the bulk of the money has gone to one-off, large-scale infrastructural projects which bring large profit to a small number of people, but which can be hard to sustain.

“If we really want to address food security issues and reduce rural poverty, we must help small-scale farmers directly, because they are the ones who produce more than two-thirds of the country’s agricultural output.”

Filomena Delgado, secretary of state for rural development, was adamant that money was reaching Angolans on the lowest rungs of the economy.

“In the social area we are investing in schools, access to drinking water, water for animals,” she told IPS.

“We are starting to work as well with new irrigation techniques, so we can reduce the dependence on rainfall and have more consistent production, and we’re supporting rural training.

“And in economic terms we are working seriously to increase the capacity of the small producers, and family farmers, particularly in terms of entrepreneurship and commercialisation.”

Delgado spoke proudly of a $350 million micro-credit scheme (run in conjunction with commercial banks) which will give small and medium-scale farmers better access to seeds, fertilisers and equipment.

Originally proposed in 2009, the scheme has finally been activated and farmers and co-operatives should soon start to be able to access the loans of between $150 and $200 at an interest rate of five percent.

Calundungo said: “The principle of providing the money is good. It’s brilliant that small-scale farmers can access credit, and it’s a considerable amount of money – but we need to make sure the process is administered in the best way and that we learn from mistakes of the past when credit schemes have collapsed.”

He also called for clarity over who would get access to the money and how problems with distance to banks, and a widespread lack of identity cards and land registration documents would be overcome.

“Angola is in a better position than most because it has money available to spend,” said Calundongo, “we must make sure this money is spent on the people who need it, not just for the sake of it being spent.”
Tweet
Republish | |