GAZA CITY, May 3 2010 (IPS) - Football is the world’s most popular sport, boasting more than an estimated 2 billion fans. And despite its isolation from the world through Israel’s four-year- old blockade, the Gaza Strip is no exception. When a football match is on, tea and shisha cafes are packed with people gathered around the TV sets. 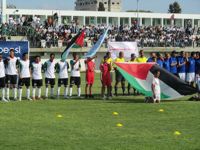 Up until now, Gazans have had to root for teams other than their own — typically Egypt, Barcelona or Madrid. Egypt, because it once governed the Strip, and Spanish teams because for a long time, theirs were the only games broadcast on the free TV channels.

In part, that is because professional fotball was one of the first casualties of the rift between the Palestinian factions of Fatah, which controls the West Bank, and Hamas, which governs the Gaza Strip. Amid political infighting and then outright military clashes, competitive soccer, once Gaza’s most popular pastime, came to a halt.

After a three-year dry spell, the Palestinian Football Association held its first match in March — Al Shate versus Rafah, two of Gaza’s most popular teams. It was the opener for 240 games, leading up to July playoffs.

And now, as football fans from around the world prepare for the ultimate in competition — the FIFA World Cup next month — Gazans are staging their own “global” competition. They are not allowed to send a team to South Africa, but as both a form of protest and an expression of their love for the game, their best players are competing over the next two weeks in the first ‘Gaza World Cup’.

The best of the Gazan footballers will compete against teams representing countries with aid workers and other foreigners in Gaza – Algeria, Egypt, England, France, Germany, Ireland, Italy, Jordan, Netherlands, Russia, Serbia, South Africa, Spain, Turkey and the United States. The teams themselves are made up of natives from the represented countries, and are “rounded out” when needed with Palestinian footballers who didn’t make the cut for the Gaza team.

The tournament, coordinated by the Palestinian Football Association, includes 15 matches in the Palestine and Yarmok stadiums, the two largest in Gaza City. Each event is free to the public. The two-week tournament ends May 15.

The Gaza World Cup is the brainchild of Patrick McGann from the U.S. and Ashraf Mohammed Hamad from Gaza. McGann first came to Gaza about a year ago with an NGO called Jumpstart International, which built schools and trained local students in cartography. When Jumpstart pulled out last fall, he stayed on to teach young adults vocational skills such as health, business and conflict resolution at the Strip’s University College of Applied Sciences (UCAS).

“It’s the Israeli siege that keeps me here,” says McGann, who also founded and heads his own non-profit toy company, called Kitegang, which seeks to help disenfranchised kids and their scarred communities around the world. “It is one of the worst injustices occurring in the world today.”

The idea for the Gaza World Cup came when McGann and Hamad, who heads a work-study programme at UCAS, started playing football together on campus, and it grew into weekly matches between locals and foreigners.

“Football is really big in Gaza, and Ashraf asked what we could do to accomplish something different here…It occurred to us that football could be a vehicle to accomplish several goals at once: helping youth develop conflict- resolution skills and build pride in their own abilities and achievements, while bringing people together — foreigners and Palestinians, and Palestinians from different political parties.”

In keeping with the spirit of diversity, as well as the celebration of local talent, McGann sought both help from outside (a Jewish Puerto Rican woman who works with Kitegang designed the logo) and locally (funding came from the Bank of Palestine, the United Nations Development Programme and Pepsi Co.). The trophy that will go to the winning team was designed by Hamad and made locally from reclaimed rubble left from the December 2008-January 2009 Israeli invasion.

“It’s impossible to play real professional football in Gaza. We can’t get out of Gaza to play any teams other than our own,” Ahmed Abu Lefa, 24, explained through an interpreter as he waited for the first of the tournaments (Palestine vs. Italy) to kick off. A player for the Al Helal Sporting Club in northern Gaza, Abu Lefa has been playing football since he was 10 years old. He was selected by lottery to play on the Palestine team, after the 42 leagues within Gaza were winnowed down to the 14 best.

“I’m hoping that some of the press coverage will be shown in other countries,” added Abu Lefa, who works by day as a civil engineer, but whose ultimate dream is to be a “real” professional football player. “I hope that people everywhere will see that we are just like them. We play for the pure joy of the sport. But we are unable to fulfil our dreams because of the siege that keeps us prisoners.”