RIO DE JANEIRO, Jun 5 2010 (IPS) - In a country where many poor children dream of “making it big” through football or modeling, retired Brazilian football stars Leonardo and Raí could have simply basked in their fame. But they decided instead to combine sport with education, art and skills training. 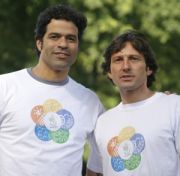 Leonardo, 40, and Raí, 45, both played on Brazil’s national team and in powerful clubs like Paris Saint-Germain in France and Italy’s AC Milan.

They have seen success in the world’s most popular sport, heard applause and insults from the crowds, withstood harassment from journalists and fans, and shared the champagne and caviar of the elite.

But like his friend Leonardo, Raí said he felt “a moral obligation” to do something for his country.

Brazil is as famous for its record of winning five football World Cups as it is for its deep social inequalities, as reflected by the poverty and violence of its favelas or shanty-towns.

It was a concern that both players shared and what brought them together as friends. Leonardo was bothered by the favela next to the field where his team trained, the popular São Paulo club, because he knew that he held one possible solution in his hands.

“Because of the passion in our country for football, we can’t be content with the playing field and with success,” Raí, whose full name is Raí Souza Vieira de Oliveira, told IPS.

“We have to be aware of the influence on people’s lives that we have as players,” he said, “the motivational power that football can have, as rugby did in South Africa against apartheid (the former official policy of racial segregation).”

That gave rise to the idea of creating the Gol de Letra Foundation with Leonardo Nascimento de Araújo, known simply as Leonardo.

“Letra” is used in Brazil to describe a football play in which one lets the ball pass between the legs and then uses the calf of one leg to move it — a touch, pass or goal “de letra”.

“It’s a play on words,” said Raí. “The true goal is the greater objective of providing people their right to an opportunity, so that they can independently go on to have a decent, dignified life.”

The road chosen by Gol de Letra was education, according to co-founder and director-treasurer Beatriz Pantaleão.

After considering several methodologies, and after years of practice, Gol de Letra created its own strategy, with support from Brazil’s Abrinq Foundation and the U.S.-based W.K. Kellogg Foundation.

Both in São Paulo, where Gol de Letra was born, and Rio de Janeiro, where it operates in the Cajú neighbourhood, children ages seven to 15 receive instruction in reading, writing, computers and sports.

There is also a collection of educational toys, including some traditional Brazilian games, as well as classes in music and theatre, and presentations on environmental awareness. The older students can take part in training to prepare for the job market.

“Gol de Letra is a sort of second shift for school. In the morning they go to their regular classes, and in the afternoon they come here. We use creative techniques that feel like a game, but actually have a lot of content,” said Pantaleão.

(In Brazil, schoolchildren attend either the morning or the afternoon shift.)

The context is part of the learning process. There is deep involvement by the parents, who sometimes come from communities divided by drug-trafficking factions outside the school. But the parents are united in the education of their children. It is against this backdrop that Gol de Letra has chosen to work in communities like Cajú, which have some of the country’s lowest human development indicators.

Pantaleão gets upset when anyone confuses the foundation with an “escolhina” (little school) for football.

Just because the founders are footballers who have chosen to use the power of this sport as a catalyst for a development project does not mean it is a “nursery” or talent pool for future football stars, like so many other projects in Brazil, she said.

In its 12 years of operation, more than 6,000 children and adolescents have passed through Gol de Letra’s doors, thanks in large part to contributions from corporations and government educational incentive programmes.

Gol de Letra associations emerged in France and Italy in 2002, spreading the word about the social benefits achieved in Brazil and raising funds to be invested in the programmes.

The foundation currently provides classes and training for 2,000 children at its two centres, and is working to disseminate its method to other similar initiatives, whether in Brazil or other countries. Gol de Letra is preparing to open doors at a new centre in Guinea Bissau, a former Portuguese colony in West Africa, for example.

Of the students who have received job training, according to Pantaleão, more than half have formal employment, while others have dedicated themselves to the arts.

A book titled “Gol de Letras,” already in its third edition, illustrates some of the foundation’s activities, and includes a poem written by 10-year-old student Lucas dos Santos that summarises the spirit of the initiative: