SANTIAGO, Jul 9 2010 (IPS) - The time has come for Latin American countries to put an economic value on the work that women do as they take care of households, children and the elderly, says ECLAC, the United Nations regional economic agency. 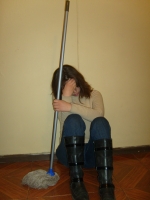 According to the document, in order to achieve parity between men and women it is essential for women to have economic, physical and political autonomy. “Labour equality,” which is the focus of the ECLAC proposal, is needed to attain that goal.

The participation of the urban female population in general economic activity is 52 percent across the region — far below the male population’s 78 percent.

Meanwhile, another indicator created in recent years to measure women’s economic autonomy indicates that in the region 31.6 percent of women older than 15 lack a personal income, although 81 percent of women in that age group work for family members or do other non-remunerated tasks.

ECLAC estimates that if women did not contribute income to their families, the portion of poor urban households would increase an average of nine points, and six points for poor rural households.

“To improve women’s economic autonomy, we think there should be greater correspondence between the state, the family and the market,” ECLAC executive secretary Alicia Bárcena, of Mexico, told IPS.

In the 12 countries studied from the region, the women dedicate more time than men to household tasks, and their total workload is greater than the men’s. According to 2007 data, Ecuadorian women, for example, total 107.5 hours of work per week, compared to 87.2 hours for men.

“The government has the duty to attend to the insufficiency of public institutions in taking care of children, the elderly and the disabled, and the duty to regulate so that private enterprise and the market also provide this same type of social protection for women,” said Bárcena.

Another policy that could improve women’s economic autonomy is the right to a pension for those older than 60 who have not had paid jobs, she said. Since 2008, Chile has been paying retirement stipends to such women in the lower economic strata.

The national constitutions approved since 1999 in Venezuela, Ecuador, Bolivia and Dominican Republic recognise the social and economic contribution of women’s unpaid work and care for dependents, but it has yet to translate into legal norms that compensate them or include them as a variable in national economic accounting.

Countries including Argentina, Brazil, Costa Rica, Chile, Dominican Republic, Mexico and Uruguay have implemented gender equality initiatives in the business world, such as best practices certification, which measure the parity in recruiting, training, career advancement and access to executive positions.

Political will has been growing, said Bárcena, “but that needs to be accompanied by economic resources, by itemisation in the fiscal budget.” In addition, she said, what is needed is a “civilising change,” in which new generations take on the shared responsibility in different ways.

“The economic rights of women should be respected and guaranteed by the governments in their development projects,” said Rebecca Tavares, representative of the United Nations Development Fund for Women (UNIFEM) in Brazil and the South American Southern Cone, an agency that has an active role in the Brasilia conference.

“The economic crisis has revealed the limits and the exhaustion of current financial and economic practices,” she said.

In her opinion, “it is urgent to conduct an in-depth analysis of the development model and provide greater incentives for the actions that make the most of the totality of women’s productive potential.”

Tavares cited as an example the income programmes based on gender, race, ethnicity and economic condition.

Civil society also plans to present in Brasilia a tool to monitor the commitments made by countries at these regional women’s conferences, and is known as the ISO-Quito, created by the Marcosur Feminist Association (AFM).

IPS had a look at the initial results, provided by Lucy Garrido, member of the coordinating team for AFM, which is made up of regional and national networks and non-governmental organisations from seven South American countries.

Based on the data available from 2007, the AFM created several indicators, on a one-point scale in which 1.0 is the best position.

The Economic and Labour Parity Index, which measures participation in the workforce, social security coverage, unemployment, urban average salaries and the incidence of poverty, Uruguay led the way, with 0.824, among 17 countries analysed.

Mexico, the second largest Latin American economy, came in 11th place, with 0.695, and Chile, with the highest rating in the region for human development, but one of the lowest rates for women’s participation in the workforce, was among the last, with a score of 0.687.

The Institutional Commitment Index, meanwhile, analyses aspects like laws on gender quotas to promote women’s participation in politics, laws against gender violence and sexual harassment, and the signing and ratification of the Convention on the Elimination of All Forms of Discrimination Against Women (CEDAW).

That index, with data from all Latin American countries, also evaluates gender and institutions, the implementation of national gender equality plans, surveys of time use and unpaid work, and the legality of abortion in certain cases.

Next week’s conference will conclude with the “Brasilia Consensus,” which will emphasise improvements in these statistics, especially those for gender violence, and the evaluation and South-South cooperation in best practices, announced Bárcena, possibly resulting in a new public policy observatory.