KIGALI, Aug 16 2010 (IPS) - Joelle Nsamira Kajuga, a female agricultural researcher has a ready answer to describe which modified crop will produce a higher yield, which will be resistant to bacteria, and which will ensure food security and generate a higher turnover for poor small-scale farmers in different regions in Rwanda. 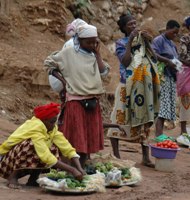 Kajuga’s extensive knowledge of crops comes after a year of researching various modified seed. And now she hopes to implement her scientific findings to improve the lives of rural small-scale farmers in her country.

In the tiny central African nation 60 percent of its population live below the poverty line and 90 percent of the land is mostly comprised of small holdings. But agriculture is Rwanda’s economic mainstay, contributing 40 percent of the country’s 3.4 billion dollar gross domestic product.

At the Rwanda Institute of Agriculture Research, Kajuga leads a team of researchers studying modified and improved seed to assess how small-scale farmers in the remote rural areas of Rwanda could adopt this seed, along with new agriculture practices, to increase their productivity.

Kajuga’s team is also developing new methods and practices to tackle diseases in crops. This includes investigating the effects of virulence factors on modified seed, specifically tree tomatoes and cassavas – crops which Kajuga believes can be used to eradicate malnutrition and generate income for rural communities.

Kajuga says that farmers in rural areas are barely able to meet their daily food needs and generate income, despite producing crops. She says this is because Rwanda’s small-scale farmers have relied on traditional seed varieties that mature after a long period and produce less output for every acre of planted crop.

In a country which is confronted with the increasing problem of limited land, Rwanda is 26,338 square-kilometres but has over 10 million people, ways to effectively farm what land is available is important.

“Rural communities have been growing a number of crops, but the yield has often been disappointingly low, making it much more difficult for small-scale farmers to cope,” she told IPS.

In Rutsiro district in west Rwanda, Kaguja and her team conducted field tests replacing the planting of tree tomatoes with modified sweets potatoes. They concluded that small-scale farmers have the capacity to triple their production if the right kind of farming skills and seeds were applied.

“(There are) no figures yet which show the extent these new modified crops could resolve the problem of hunger and malnutrition but the (research) has shown that implementation and success of the research will rely on the mindset of rural communities in these regions,” she said.

Kajuga emphasises that Rwandan farmers need to be trained and educated about the advantages of using improved seed.

“In order to change the image of small-scale farming in Rwanda (we need to) focus on training programmes on how to maintain the seedlings and disease management,” she told IPS.

According to Rwanda’s Ministry of Agriculture, in rural areas unemployment has affected more women than men – especially those involved in the farming. The Rwandan government has adopted a number of policies dedicated to promote new farming technologies in rural areas.

Mary Mukamabano, a 42-year-old mother of seven and cassava grower from Rutsiro district, believes small-scale farmers need to be educated on changing agriculture practices. She said this is because currently most of the land farmed by small-scale farmers in rural areas has proved insufficient to feed their families.

“It’s a challenge if someone is exploiting a plot of land that will never feed his family and generate at any income,” she told IPS.

Mukamabano said the hardest part of being a small-scale farmer is the “randomness” of her days and she would prefer to find a job other than farming. “What is most needed is to help us get other jobs instead of farming,” she said.

But Gloriose Nyiramatama, a maize and groundnut farmer in the southern Huye district does not want to change her profession. Instead she changed her crop.

“If we (really want) to move ahead with alternate farming ideas, we need research practices to enrich locals and also (need to be educated on) good agricultural practices,” said Nyiramatama.

Nyiramatama was able to effectively use research to increase her crop production. The mother of five stopped growing sweet potatoes and substituted it with groundnuts. She said that since changing her crop, she has generated a slightly higher income than she did when farming sweet potatoes and that “production is growing”.