NEW YORK, Sep 22 2010 (IPS) - African nations lack the political will to provide access to primary education to all children, according to the Global Campaign for Education (GCE), a coalition of organisations in 100 countries. 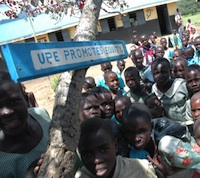 In most countries on the continent, achieving basic education remains a far-off dream, the coalition stated in a report titled, “Back to School? The worst places in the world to be a school child in 2010”, which was launched during the United Nations Millennium Development Goals (MDG) Summit in New York, where world leaders are gathering to evaluate their countries’ progress five years ahead of the 2015 deadline.

Out of the ten worst places in the world to be a school child, seven are in Africa: Somalia, Eritrea, Comoros, Ethiopia, Chad, Burkina Faso, Central African Republic, Mozambique, Zimbabwe and Liberia.

In East Africa, Uganda is the country with the worst education gaps, followed by Burundi, Tanzania, Rwanda and Kenya.

This is mainly due to the fact that Uganda had the lowest public expenditure on education in East Africa, according to the report. At the end of the 2009/2010 financial year, the education ministry had not spent about seven million dollars budgeted to recruit teachers.

Okonjo-Iweala said that the International Development Association, the World Bank’s “fund for the poorest”, will make available an additional $750 million over next five years for education in the world’s 79 poorest countries. This, she said, is a 40 percent increase in donor money for education.

Education experts, however, say those amounts will still be insufficient. “It’s a welcome contribution from World Bank but a drop in the ocean in terms of what is needed to get basic education for all children. Other donors are going to have to up their game on education, too,” cautioned Oxfam senior policy advisor Clare Godfrey.

But hoping for financial assistance from international donors will not be not enough, either. The GCE report stresses that developing countries must play their part, too, and commit 20 percent of their annual budget to education to meet MDG targets.

On the upside, there has been progress in a few African countries, such as in Tanzania, where an additional three million children are now able to go to school due to the introduction of free primary education. Mozambique has halved the number of out-of-school children, while Rwanda has increased the number of trained teachers.

But only in one country in sub-Saharan Africa do more than half of all children attend secondary school – in Cape Verde, the small island nation of about 430,000 people.

One of the key reasons for the slow progress in access to education are unstable political and conflict situations in African countries.

Former British prime minister Gordon Brown, who attended the meeting, said it was crucial to consider education in times of conflict as much as the provision of humanitarian aid. “We should work to fast-track education initiatives so that, in places with conflicts, education is available to the young at the frontiers in the same way as medicine,” he suggested.

Brown further highlighted the fact that education forms the basis for meeting other MDGs, such as poverty reduction and gender inequality. “Education is the best anti-poverty, anti-deprivation and best anti-crime programme,” he claimed.

He was referring to estimates by the UN Educational, Scientific and Cultural Organisation (UNESCO) that 171 million people could be lifted out of poverty if they left school with nothing more than reading skills.

Apart from countries’ political situation, gender inequality is one of the main reasons for children’s limited access to education. “Girls are the real victims of the world’s failure to invest in education, with millions unable to enter school,” said GCE president Kailash Satyarthi.

Nthabiseng Tshabalala, a 12 year-old South African orphan from Soweto township and an ambassador for 1GOAL, a GCE campaign that used the FIFA Soccer World Cup to bring attention to education, spoke at the meeting about how difficult it is for many girls to get an education. “I am lucky to go to school, and I don’t take it for granted,” said Tshabalala, whose mother died when she was seven years old.

The GCE report also emphasised how educated girls become better mothers, which will have an impact on other MDGs, such as maternal health and child mortality. A child whose mother cannot read or write is 50 percent more likely to die before the age of five and twice as likely to suffer from malnutrition than a child whose mother completed primary school, the report stated.