SANTIAGO, Oct 16 2010 (IPS) - How many litres of water are needed to produce one kilogram of table grapes? The current effort to measure the “water footprint” of this and other Chilean exports could give us some answers by year’s end. 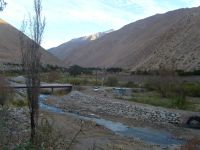 The water footprint is the total volume of freshwater used in the production of goods and services. It can be calculated for a specific product, an individual company or an entire country. This footprint, say experts, is an indicator of both potential and limits.

“Perhaps the water footprint will not follow the same critical path as the carbon footprint, but it does call companies’ attention to rethinking their water resource management,” said Rodrigo Acevedo, head of agro-industry projects at the Chile Foundation, one of the entities measuring the footprint in this South American country.

It is a matter of “changing the paradigm,” Acevedo told Tierramérica. It will obligate companies to “go beyond the legal spheres,” like water use rights, and consider the effects of their consumption on the sustainability of local watersheds and of their own businesses.

Right now, the leading entity for defining the standards is the Water Footprint Network, a non-profit foundation based in the Netherlands. It has calculated the water footprint of such things as a cup of coffee (140 litres) and a kilo of rice (3,000 litres).

But unlike the globalised notion of the carbon footprint, which measures the quantity of greenhouse-effect gases emitted into the atmosphere by individuals, products or companies, the consumption of water is difficult to report or compare because it entails complex processes with a eminently local impact.

Three separate “footprints” are considered in the calculation: the green, which accounts for the contribution of precipitation; the blue, which involves the surface or underground water sources; and the grey, which entails the contamination generated in the production process.

Among the Chilean partners of the Water Footprint Network are the Chile Foundation, the public University of Chile, the Green Solutions consultancy, and the wine producers Concha y Toro, De Martino, and Errázuriz.

The Chile Foundation was created by the U.S. ITT Corporation (whose interests include water and sanitation, weapons, satellite technology and transportation), the Chilean government, and the copper company Minera Escondida, owned by the Anglo-Australian mining and petroleum group BHP Billiton.

In a pilot effort, the Foundation is measuring the water footprint of products and companies, mostly in the northern region of Atacama, which is a semi- desert area, with scarce water resources, several major mining projects, and for-export agriculture.

The results will be ready in December for six farming companies in the Atacama’s Copiapó and Huasco watersheds, which produce table grapes, avocados, olives and vegetables.

With a portion of that data, the institution is calculating the situation of the entire Huasco watershed. To create a complete map, it is preparing to measure — for the first time in the world — the full impact of mining activity on water resources.

There are already companies interested in what the Foundation is doing. The area is home to the highly controversial Pascua Lama gold and silver deposits, to be mined by the Canadian company Barrick Gold.

The fact is that the water footprints cannot be compared if the companies producing a specific product are located in geographically different places, with different precipitation patterns and different soil compositions.

In the watershed, however, “I can conclude that the table grape is much more efficient in terms of water consumption than the vegetables, or vice versa,” explained Broschek. This implies “determining the true impacts of each activity within a watershed,” taking into account various factors, like productivity, she said.

Once it has the results, the Foundation hopes to set up models for different scenarios in Huasco, like the launch of a new mining operation or a season of drought. Those models will then be used to evaluate other watersheds, said Broschek.

With applications like this, the water footprint could become a management tool, both for the public and private sectors, she said. There have been many disputes in Chile in recent years over the contamination of rivers and the conflicting interests of the mining, farming, sanitation and hydroelectric sectors.

According to Broschek, although the companies’ interest in the water footprint is usually related to their concern with their public image, they soon realise that it is the first step to improving efficiency.

Along with the Ministry of Agriculture, the Foundation is measuring the water footprint of different farm and forest products, like grapes, apples, avocados and blueberries.

First they will estimate a national average per product, and the provide context according to where it was produced and the sustainability of the watershed involved, said Acevedo, who is calculating the footprint of Concha y Toro for the farming and bottling processes of its famous wines.

Although it is not a requirement of the international market, the water footprint is an opportunity “to generate product faithfulness, differentiation and added value,” Paola Conca, head of sustainable commerce for the Board of Export Promotion, told Tierramérica.

“Providing information about the water footprint could be a factor of economic competition” for Latin America, “and Chile could be a pioneer in establishing methodologies,” because of the development of its private water market, said Joseluis Samaniego, director of sustainable development and human settlements at the Economic Commission for Latin America and the Caribbean.

Because it is a heavy exporter, Chile decided to participate in the water footprint effort, and not wait for the international community to impose disadvantageous parameters, said Acevedo.

He believes such parameters will be a reality in two or three years, taking form as a “sustainable water” certification to assure that the produce does not come from inappropriate or stressed watersheds.