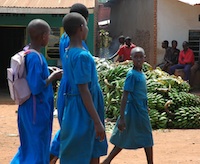 As a result, thousands of students who rely on bursaries fear that they will have to abandon their studies if their allowances and merit-based college scholarships – which cover students’ tuition fees, accommodation and living expenses – are scrapped.

Cedric Kavamahanga, an engineering student at the Institute of Science and Technology in Kigali, says many of his fellow students might have to drop out of college.

“The livelihood [and access to tertiary education] of a number of students from poor families are depending on this amount allocated to them,” he explains.

But the Rwandan government has made it clear that it believes the new focus on improving access to and the quality of primary education justifies the sacrifices that will be made in the tertiary education sector.

“The resolution to cut allowance for university students was taken after observing that there are other levels of the country’s education system, which are still lagging behind,” says education minister Charles Murigande.

The minister promises the bursary will be abolished gradually. He said, for a while, government will continue to support students financially, but for shorter periods, with students being required eventually to carry all of their university costs.

In 2009, Rwanda’s Ministry of Education spent $11.4 million on bursaries for about 27,000 students in public universities and higher institutions of learning.

Government says this is far too high and recommends rather using the money to ensure that every citizen receives up to nine years of free basic education – six years in primary school and three years in secondary school.

Murigande promises, however, not to let university students fall by the wayside. He says those students who are unable to complete their studies without financial support from government, will be somehow considered in the reshuffled education budget. But up until now, no specific plan has been put into place to solve the issue.

Ultimately, government hopes that public and private universities will start to finance bursaries for their own students from money generated by research produced at their institutions. Others will have to apply for loans and pay those back after their studies.

“The government emphasizes transforming higher learning institutions into autonomous universities capable of generating their own income from their research,” notes Murigande.

He believes it is government’s first obligation to ensure that everyone has access to basic education, while tertiary education is important, but not a necessity.

Since Rwanda introduced free primary education in 2003, learners’ enrolment numbers have risen throughout the country. But poor infrastructure, lack of equipment and a shortage of qualified teachers have been jeopardizing progress made.

“Rwanda has pledged to achieve universal education by moving ahead step by step, and so far, the country’s free primary education is only slowly becoming a reality,” explains Rwandan prime minister Bernard Makuza.

“From now on, 25 percent of the total budget [of $92.1 million] of the education sector, which used to be allocated as allowances to university students, will be injected to finance basic education for all”, he adds.

Makuza believes that cutting the allowances of public university students is the best way to close financial gaps in the primary education sector. The money will not only be channelled into primary education but also be used to improve the first three years of secondary education.

By 2012, 40 percent of the country’s children will have access to free primary and secondary education, and this number will be more than doubled by 2015, the deadline for meeting the MDGs, government promises.

“Despite our modest resources, we have allocated more than 25 percent of our annual national budget to education, helping us to realise 98 percent enrolment target for primary education, well ahead of 2015,” President Paul Kagame announced during the United Nations MDG Summit, which took place in New York in September.

This will be a huge improvement from eleven percent of children attending primary school in Rwanda in 2007.

But the country’s education experts are concerned that shifting budgets away from tertiary education will mean that, in the long-term, Rwanda will not be able to grow an intellectual elite that can help foster the poor central African nation’s economic growth.

They also believe it will undermine Rwanda’s widely perceived position as role model for the implementation of the United Nations Educational, Scientific and Cultural Organisation’s (Unesco) ‘Education for All’ initiative that aims to meet the learning needs of all – children, youth and adults – by 2015.

“It would be important to carefully assess the trend of this change in educational finance to avoid that Rwanda ends up lagging behind when it comes to its competitive academic offer and economy,” warns a senior lecturer at the National University of Rwanda in Butare.