ABIDJAN, Nov 3 2010 (IPS) - When he was 15, Maurice Koné dreamed of becoming a great footballer. Adored for his technical skill and eye for goal by fans in Koumassi, a neighbourhood in the south of Abidjan, he dreamed of living the life of a professional overseas. 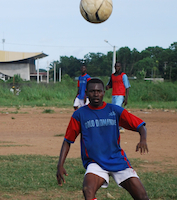 Young footballers in Koumassi: they hope to fulfill their dreams of becoming professional players in Europe or Asia. Credit: Fulgence Zamblé/IPS

“One evening, one of the older guys in the neighbourhood came to explain to my parents that a scout had heard about me and wanted to see me to sign a contract in Switzerland,” recalls Koné. “I was not the only one. According to this intermediary, we were seven… The only thing we needed to do: scratch together 1.5 million CFA (around $3,200) in two weeks.”

For more than a decade, a host of young footballers, overwhelmingly under the age of 18 (more than 3,000 since 2000), have left the African continent to try their luck in Europe and Asia, according to the website of Association foot solidaire, a non-governmental organisation based in Paris, which fights against mistreatment of young African footballers.

The mafia-type characters who extract money from parents, most of them poor, take young Africans to Asia or Europe with the promise of a trial at a big club. In the end, many of them are abandoned in the street, with no means to support themselves.

Even with Koné’s parents’ help, he struggled to meet the demands of the agent.

“I had a monthly income of 135,000 CFA ($290),” Habib Koné, Maurice’s father, says bitterly. “I went into debt for Maurice, hoping that in the future, he could take charge of his seven brothers and sisters.”

To the surprise of Koné and his young fellow adventurers, when the day came to fly out of Abidjan, the seven boys boarded a plane bound not for Europe, but for Pattaya, Thailand.

“A month after our arrival and several inconclusive trials with clubs in Pattaya, our guide disappeared. We were left in limbo for four months, doing whatever we had to to survive, before being deported to Tunisia,” says Koné. “And after having let their parents know, two of us made it back to Abidjan.”

Koné says two others went to Spain, while three more found themselves an escape route by by training with Tunisian clubs. He has heard no news of these last three for two years. “I don’t know if they have accomplished their dream or not.”

The Fédération International de Football Association (FIFA, the governing body for soccer worldwide), has now implemented what it calls a Transfer Matching System. The TMS collects 30 pieces of information about a player, and for the transfer of a player to be recognised, the data held by both club must match perfectly.

“What this means since the procedure went into effect, for young footballers, that they cannot leave one club for another (in another country) without leaving a trace,” says Alain Malan, a sports consultant in Abidjan. “Where a player is transferred, he must be an adult, or have parental permission, as well as the approval of the national federation.”

“There’s no longer ‘over the counter’ sales of players. The clubs that recruit young players for a bargain price [with the view to] sell them for much more, those clubs will have to review their policy,” says Malan.

According to FIFA’s new guideline, TMS will no longer authorise the transfer of a youth who does not belong to a club registered with the national federation. And the federations are now involved in tracking transfers.

“We have been waiting a long time for a measure like tihs,” says Eric Kacou, head of communications for the FIF, the Ivorien football federation. He estimates that between 10 and 15 young footballers leave Côte d’Ivoire every year. “We have trained the clubs on this and no longer will a footballer from our country leave bypassing the current system.”

“This system should have been in place long ago. It would have helped to avoid much sadness,” says Abib Koné. He accuses African government of failing to take a firm grip on this rampant phenomenon.