LUSAKA, Nov 15 2010 (IPS) - Dams, sugarcane plantations and rapidly growing population threatened the health of the Kafue Flats, a richly diverse wetlands in southern Zambia. But growing recognition of more sustainable use of its water and fertile soil are securing the health of the ecosystem. 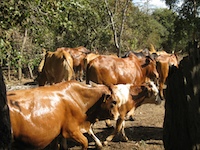 Tonga cattle are one of many species dependent on the Kafue Flats ecosystem. Credit: Lewis Mwanangombe/IPS

The Kafue Flats cover a surface area of about 6,500 square kilometres, part of the Kafue River system which flows into the Zambezi River. The river falls only 13 metres as it flows east for 250 kilometres from Itezhi-tezhi to the Kafue Gorge, creating a vast area of wetland that is home to eland, gazelles, buffalo and several species of antelope adapted to life in the marshes. The area teems with birds, including the threatened slaty egret and wattled crane.

“When we were growing up we used to see lots of wild game grazing on these plains.  But over time the wild animals disappeared as more and more people came on the scene leaving only cattle grazing on the land,” Chief Mwanachingwala recalls.

The Flats were sparsely populated by humans, aside from Tonga herders who grazed their cattle on the lush grass that sprang up as waters receded in the dry season. But this changed dramatically with the establishment of several sugarcane estates beginning in 1968. Thousands flocked from all over the country in search of work on the estates and surrounding farms, many settling in and around the administrative town of Mazabuka.

Far more came to region than would find employment. The snapshot provided by the 2000 census revealed that the Zambia Sugar company employed 3,250 people permanently and 8,000 more on a seasonal basis. But 22,000 others lived in unofficial settlements on the company’s Nakambala Estate, 10,000 more were squatting in areas adjoining, many living crowded into rudimentary houses built of thatched grass.

Men and women alike eke out a living in the settlements – with gently ironic names like “Zambia” and “Show-Grounds” – as best they can. Casual labour on farms, petty crime, fishing.

But the river’s fish stocks have dwindled under dual pressures. First, the sugarcane estates draw vast amounts of water each day for irrigation. This water mostly returns to the water courses loaded with chemical fertilisers. This affluent encouraged the rapid growth of certain plants like water hyacinth, starving parts of the wetlands of oxygen and driving fish to less choked areas.

Equally damaging was the operation of the Itezhi-tezhi Dam, built immediately upstream of the wetlands in the 1970s. The dam was intended to hold water from the rainy season in reserve, and release it into the river during the dryest period in October and November to power the hydroelectric turbines in the Kafue Gorge Dam 250 kilometres away at the other end of the flats.

The Kafue Gorge generators produce a third of the country’s power, but the scheme badly disrupted the natural, dramatic changes in water levels with adverse effects on the many species whose life cycles were adapted to the annual flooding and drying out.

But a series of interventions prompted by the WWF and by locals themselves have begun restoring balance to the Kafue Flats ecosystem. New operating protocols for the hydro dams have been implemented, to better mimic the seasonal highs and lows. The sugarcane plantations have taken steps to reduce the nutrient-rich run-off. And local people established a 50,000 hectare conservation are that is generating income through tourism.

One of the WWF’s current officials in Lusaka, Dickson Mwape, says the federation worked to create a partnership between the government, estate owners, the Zambia Electricity Supply Corporation and locals.

Sugarcane estates now control much of their runoff with a biological solution: patches of reeds and papyrus are planted to serve as “wetland filters”, drawing up many of the nutrients before much cleaner water returns to the Kafue River.

“The plants grown as bio-filters can also be used to make a modest income – for example, basket-making from reeds,” Nyambe said.

Tonga Chief Mwanachingwala faced massive opposition when he proposed the establishment of a conservation area; many were suspicious that they would lose access to the valuable pasture they had relied on during the dry period from July to December.

He was able to overcome the objections and – with some of the land donated by the large sugar estates, and the bulk carved out of communal land, the Mwanachingwala Conservation Area was established. Starting with just 33 Burchell’s zebras and 130 impala by way of large fauna, the area now boasts of the rare Kafue lechwe, and another marsh antelope known as sitatunga.

The conservation area enjoyed the support from the Zambia Wildlife Authority, and was awarded a licence to operate on the understanding that eco-tourism receipts would be used to fund community projects like schools and clinics as well as giving out small cash payments to the villagers directly affected by the creation of the game sanctuary.

Nyambe argues that the protection of the Kafue Flats has succeeded because it involved all the stakeholders with a lasting presence and interest in the area.

Conservationists see the successes now being chalked up in the Kafue Flats as a model to protect other wetlands in Zambia; including the Barotse Flood Plain, and the Busanga-Lukanga swamps upstream of the Kafue Flats.

*This story is part of a series of features on biodiversity by IPS, CGIAR/Biodiversity International, IFEJ and UNEP/CBD, members of Communicators for Sustainable Development ( http://www.complusalliance.org).