WINDHOEK, Namibia, Dec 28 2010 (IPS) - Twenty years after independence, representation of women in senior government structures and in Parliament is declining in Namibia. According to the latest demographic survey results of August 2010, out of a population of around 2 million, women outnumber men 10:9. In 2001, the ratio was 94 males per 100 females. 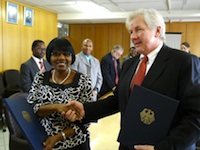 In 2010 Namibia reformed its national gender policy in line with the United Nation’s millennium development goals (MDGs) and its own Vision 2030, a national development policy dissected into five-yearly development plans. It includes the increase of women in decision-making positions in government, the private sector, religious groups and community institutions.

However, following the 2009 November national elections women’s representation in Parliament declined from 30.8 per cent to 20 per cent. Only 16 women are now Members in the National Assembly, which has 72 elected seats.

Fifteen of the women in Parliament are from the ruling South West Africa Peoples Organisation (SWAPO) party, among them five Cabinet ministers and four deputies. Only two women MPs are from opposition parties. The Deputy Speaker is a woman. Cabinet representation of women stands at 22.7 percent.

Namibia ratified the 2008 Protocol on Gender and Development of the 15- member regional blocking 2009, but only six other states followed suit.

While SADC already targeted 30 percent women in decision-making positions by 2005, the 2008 Protocol strives to achieve 50 percent of women in such positions in the public and private sector by 2015.

This target is in line with that of the African (AU) Union. At the current slow pace of gender transformation in the political arena, SADC might not reach this goal in five years.

The Protocol is only enforced once two-thirds of all the applicable countries ratify it. Angola, Lesotho, Mozambique, Seychelles, Tanzania and Zimbabwe have deposited the instruments of ratification with the SADC Secretariat, while DRC and South Africa have almost completed the process.

At the annual SADC summit in the Namibian capital of Windhoek in August 2010, the communiqué issued afterwards said heads of states noted on the Gender Protocol “that the overall situation is generally varied with some member states recording improvement while others are regressing. The Summit urges member states to ratify and implement the Protocol.”

Jo-Ann Coetzee, Gender Project Assistant at Women’s Leadership Centre, wants more to be done. “I think here in Namibia women are still not given the value that they deserve. We are still overlooked and seen as unimportant,” she says.

Namibia’s Gender Equality and Child Welfare Minister, Doreen Sioka, wants a speedy implementation of the Gender Protocol. “Our country started off well, but its women’s representation in parliament has gone down to 20 per cent. I am optimistic we can still reach the 50 per cent women’s representation goal in parliament and other public institutions come 2015” – which is when the next national elections in Namibia take place.

The ruling party’s Women’s Council has already demanded a 50:50 representation in the party’s hierarchy like the Politburo and its central committee come 2012 – the next Swapo congress.

Even Namibian President Hifikepunye Pohamba was disappointed with the under-representation of women on his Swapo party list for the November 2010 regional and local authority elections.

Veronica de Klerk, Executive Director of the local Women’s Action for Development (WAD) organisation sees the decline in women’s representation as stemming from political parties low listing of women candidates. “It should be made compulsory for all parties to introduce an alternate listing system of women on party lists with men, meaning a 50:50 share or zebra listing” says De Klerk.

But have they made their mark? Finance Mister Saara Kuugongelwa Amadhila- Kuugongelwa, who was appointed in 2003, reduced national debt and the budget deficit considerably during her term in office. The tax regime was also revised and the Financial Intelligence Act was drafted and promulgated to curb money laundering and fraud.

The Local Authorities Act of 1992 requires that over 30 per cent of candidates on every party list for local elections must be women. “This law has worked very well with over 42 per cent of local council members being women,” says Hubbard. Regional Councils, where there is no legal requirement for affirmative action, consist of only about 11 percent of women.

The Traditional Authorities Act of 1995 also requires traditional authorities to promote women to positions of leadership, Hubbard points out.

The Combating of Domestic Violence Act of 2003 was the result of strong advocacy by women’s groups. Some 250 people demanded a law on this issue at the opening of Parliament in 2003. “To help put these laws into action, Namibia has created 16 Women and Child Protection Units, covering every region in Namibia,” she notes.

Before Independence, married women in Namibia were not allowed to buy or sell their own property, register land in their own names, take out a loan or be a director of a company or a trustee without the consent of their husbands.

The Married Persons Equality Act changed this in 1996 and wives now have the same rights as their husbands.