CACALOXÚCHITL, Mexico, Feb 18 2011 (IPS) - Yandi Condado and a small group of farmers in the southern Mexican state of Puebla decided a few years ago to process their peanuts as an economic boost — and to defend this traditional crop against the advances of more profitable options. 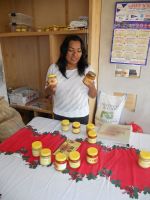 “Many years ago we planted a lot of peanuts, but now people prefer other crops. For that reason, and to halt emigration, we are proposing an alternative, with added value,” Condado told Tierramérica. She was born and raised here in Cacaloxúchitl, a town of about 3,000 located 170 kilometres from Mexico City.

The Cacaloxúchitl Group United for Development, a cooperative of four women and two men, began operating in March 2009. The farmers grow three hectares of peanuts, harvesting six tonnes per year. They then artisanally produce peanut butter and hot chilli sauce.

Native to South America and adopted by Mexico, this legume is rich in protein, vitamins and non-saturated fats. Faced with rising food prices and a possible rise in poverty, it could provide the means to confront difficult times.

“It is a good palliative for a food crisis, but not for poverty. It helps prevent people from dying of hunger, but what is really important for ending poverty is to improve local agricultural production,” José Guimón, an expert on these issues from the Autonomous University of Madrid, told Tierramérica.

Some 53,000 hectares are cultivated with peanuts in Mexico, with average yields of 1.55 tonnes per hectare for a total output of about 80,000 tonnes. Puebla contributes 10 percent of that total.

Meanwhile, peanut imports are on the rise, especially from the United States. Mexico purchased 107,839 tonnes in 2009, while exports were just 866 tonnes.

“Ready-to-use therapeutic food” (RUTF) strategies of the World Health Organisation have proliferated in recent years in the fight against malnutrition, especially in African countries.

In this context, the nutritional value of the peanut stands out. One of the varieties used in the mixture, which does not need to be cooked, is prepared by adding sugar, powdered milk, vegetable oil, vitamins and minerals, according to a formula created in 1996 by French experts Michel Lescanne, founder of the Nutriset company, and André Briend, a physician specialising in nutrition.

Nutriset, which manufactures the food paste known as “Plumpy’nut”, has distributed its product in Ethiopia, Malawi, Mozambique, Niger, Democratic Republic of Congo and the Dominican Republic through organisations like UNICEF and the non-governmental Doctors Without Borders (MSF – Médecins Sans Frontières).

“It is a tool that is easy to utilise in crisis situations, in rural communities. Children gain weight and are better nourished. It functions well in convalescence and in prevention,” MSF nutritionist Anita Sackl told Tierramérica.

“We are supporting networks to distribute our products and carry out initiatives for better nutritional access of the poorest populations” in Bolivia, Guatemala and Peru, said French journalist and Nutriset advisor Christian Troubé.

In 2007, this French company opened the Vitaset affiliate in the Dominican Republic, from which the food aid flows to neighbouring Haiti. However, distribution in Latin America is moving very slowly.

As a rainy season crop, the farmers plant peanuts between May and June, for harvest in October or November. “We do everything, from manually cleaning to packaging,” said Condado, who has a degree in economics from the state-run Autonomous University of Puebla.

“Cacaloxúchitl” is an indigenous word that can be translated as “iris that blooms in May” or “crow flower.” The cooperative bearing its name has self-financed its projects with revenue from a mechanised peanut sheller and a mill.

The farmers assert that it is more profitable to give their product added value rather than sell the raw material because one kilogram of peanuts fetches less than one dollar. In contrast, a 260-gram container of peanut butter sells for three to four dollars.

“The fact that peanuts are grown in many developing countries allows the use of local resources for therapeutic food production, giving the countries greater autonomy and food security,” said Guimón.

“It is easy to use in places where the peanut forms part of the local diet. Mexico could be an ideal location for a similar project,” said Sackl.

In India, Kenya and Ethiopia, for example, food-processing factories have emerged for the production of RUTFs.

The future of the Cacaloxúchitl cooperative lies in obtaining organic certification, access to public financing, and participation in fair trade and solidarity economy schemes.