ELUBO, Ghana, Mar 26 2011 (IPS) - As many as a million people have fled Côte d’Ivoire’s commercial capital, Abidjan, due to intensified fighting. Many people are fleeing to areas in the north, centre and east of the country as thousands of youth answered a call to join forces loyal to Laurent Gbagbo; others are trying to leave the country. 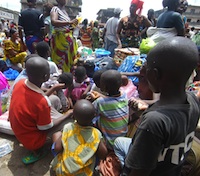 Saturday saw a rally of up to 15,000 youth supporters of Gbagbo outside the presidential palace in Abidjan, but the exodus from the city began accelerating following a mortar attack on a market in the northern suburb of Abobo on Mar. 18, which killed 30 people,and wounded 60 more.

UNOCI, the U.N. peacekeeping force in Côte d’Ivoire, said the shelling of the market was carried out by soldiers loyal to Gbagbo, who has refused to concede that his rival, Alassane Ouattara, was the winner of presidential elections last November.

The death toll since mid-December is put at 462 by the United Nations, rising quickly as Gbagbo supporters and loyalist soldiers fight their way into areas of the city identified as Ouattara strongholds.

An estimated 100,000 people have sought refuge in camps and villages in Côte d’Ivoire’s neighbour to the west, Liberia. The deteriorating situation will likely also see an increase in refugees fleeing east, across the border into Ghana.

IPS encountered Barthélémy Konin at the border on the same day as the attack on the Abobo market, a hundred metres beyond the Ivorian border post at Noé, the last settlement on the Ivorian side of the frontier with Ghana.

“If the situation spreads across Côte d’Ivoire, I want to have already made provisions in Elubo to avoid ending up in a refugee centre,” said Konin, about to begin administrative procedures to enter Ghana.

A trickle of people from Côte d’Ivoire to Ghana across the two-kilometre bridge that separates the countries at this point has gathered pace as the political crisis threatens to escalate further.

At this well-travelled entry point three hours’ drive from Abidjan, the Ghana Refugee Board (GRB) said it had recorded more than 2,000 Ivorians crossing the border between the beginning of armed confrontations in Abidjan in mid-December and the start of March. Among these 548 were registered as refugees by the authorities at Elubo.

“But, with the deterioration of the social and political climate in Côte d’Ivoire since the beginning of the month, we have gone from 10 or 20 refugees a day to 50, sometimes 60 at this location,” said Kelly Forson, in charge of the Ampain refugee camp, a dozen kilometres away.

“All the refugees at Elubo are transferred after two days to the transit camp at Ampain and other sites to avoid overcrowding,” explained Marvis Abo, from the United Nations High Commission for Refugees in Ghana. Those crossing the border also include refugees from Benin, Togo and Ghanaians returning home.

“The mechanisms in place are the same to deal with refugees in transit. But we must now consider the eventual needs of those who will stay here,” according to the International Organization for Migration, which is assisting with operations to transfer new arrivals towards the camps.

Taking into account the limited capacity of the refugee camps here – between 150 and 200 people, according the the GRB – the available sites will quickly overflow.

The slow but steady ratcheting up of tension meant that a fair number of Ivorians arriving in Elubo had a plan and some minimal resources to survive their displacement.

“For the moment, we have avoided these humanitarian aid setups,” said Ferdinand Koffi, a mason who arrived in Ghana with friends in early February. “The four of us, we have chosen to band together and rent a house. Each one has found a small job to do to have an income.”

Elubo residents have grown used to other movements of people from Côte d’Ivoire, come to receive or send money to other countries.

Outside a money transfer agency in the heart of the town, a long line of waiting customers, mostly Ivorians, stretched down the street. “I’m waiting for more than 400,000 CFA francs (around 870 dollars) coming from Milan. After the withdrawal, I will return to Abidjan where the money will go towards the daily upkeep of three families,” said Roland Zézé, unemployed.

Lamine Camara, who sells spare parts in Abidjan, was in Elubo for business reasons. “The foreign banks are closed within the country, and facilities to transfer money are nonexistent [in Côte d’Ivoire]. So we have to come here to send or receive money so I can order parts which will be shipped to me via a Ghanaian port.”

If it was difficult to clear a path to the doors of adjacent businesses, shopkeepers were not complaining on this particular day. “We know that it’s an unusual situation, so we’re avoiding quarrels,” said Matthew Kablan, manager of a textile store cut off from the street by the queue for the money transfer.

“We hope that their country will find peace again. Many immigrants have gone there and made their fortune. It would be unjust for them [Ivorians] to now be overshadowed by chaos.”

Events of the past week suggest the shadow may grow deeper before it lifts. UNHCR staff estimate that between 700,000 and a million people have fled the opposition-identified suburbs in the north of Abidjan, fearing violence.

Much depends on whether the relative peace that has prevailed outside of the city holds, or if confrontations or retaliatory attacks by by Ouattara supporters return the country to full-scale civil war.