JOHANNESBURG, Mar 10 2011 (IPS) - An attempt to organise a mass protest against the government in Angola’s capital Luanda this week may have fallen flat, but there is no doubt that a fuse has been lit among people who for so many years have not dared to challenge authority. 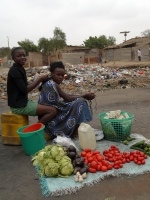 Frustration is growing as rapid economic growth fails to translate into a better life for Angola's majority Credit: Louise Redvers/IPS

Only 13 people turned up in the early hours of Mar. 7 to take part in what its internet-based organisers had called “the Angolan People’s Revolution” and they were promptly arrested, along with an accompanying team of journalists.

But the fact that they turned up at all is evidence, many say, of a turning tide of feeling in a country which has been ruled by President Jose Eduardo dos Santos for nearly 32 years, and who behind Libya’s Muhammad Gaddafi and Teodoro Obiang of Equatorial Guinea, is the continent’s third-longest serving leader.

In the days leading up to the protest, the planned action was the main topic of conversation across all tiers of society, from the top floors of skyscraper office blocks to the mud-level slums on the peripheries of the cities.

Unhappiness on the streets

Angolan journalist and political analyst Rafael Marques said even though few people were ever going to take part in the demonstration for fear or reprisals, they supported the claims of the organisers.

“People in Angola are not happy and Dos Santos is becoming very unpopular, I would say the only guarantee from here is one of instability,” he said.

There is increasing discontent among ordinary Angolans who are failing to see the benefits of the country’s economic boom, he explained.

And he added that people were angry about reports about corruption and personal enrichment of the President and his inner circle while much of the country remained poor.

Despite its growth over the last decade (11 percent) outperforming China (10.5 percent), up to two-thirds of Angolans remain in poverty and half the population has no access to water or electricity, according to government figures published last year.

Fernando Macedo, an outspoken Angolan constitutional law expert, said there were many parallels between Angola and Egypt, Tunisia and Libya.

“From the way the media is manipulated to the ruling party’s hold on the police and judiciary which are supposed to be independent, there are many similarities,” he said.

He added that the arrests also violated the newly-ratified Constitution which enshrines the right to peaceful demonstration, only served to prove the government’s lack of respect for its own laws.

Adding a trademark Angolan “confusao” to the situation are the claims and counter-claims that the Mar. 7 protest movement was in fact an invention by the ruling MPLA (People’s Movement for the Liberation of Angola) to test out people’s reactions and be able to pinpoint troublemakers.

Many were certainly suspicious about the emails which seemed to be sent from a number of different people, one even calling himself Agostinho Jonas Roberto dos Santos, the first names of the leaders of the country’s three liberation movements and the surname of the existing president.

The main opposition party UNITA (Total Union for the Independence of Angola) said it supported the idea of change, but could not endorse a faceless organisation, warning that a disorganised event could lead to violence.

Whether the emails were authentic or not, and regardless of how many people turned up on Mar. 7, Marques says the episode was a defining moment because it revealed weakness among both the opposition and the ruling party.

“It exposed the fact that the opposition were too disorganised and lacking in intellectual clout to take advantage of the situation,” he said.

Marques also believes that the way the MPLA reacted to the email threat of the protest, authentic or not, and the subsequent unlawful arrests, has also done them no favours.

In the days leading up to protest, appeals from party officials filled the column inches and airwaves of the largely-state controlled newspapers and radio and television stations, urging people not to get involved.

The MPLA’s Principal Sectretary for Luanda, Bento Bembe, fired the opening salvo saying: “Whoever tries to demonstrate will be neutralised because Angola has laws and institutions and a good citizen understands the laws, respects the country and is a patriot.”

This was followed by accusations that the protest organisers wanted to restart the war, that they were being “supported” by meddling “external agents” in places like Portugal and the UK.

Rumours even started to circulate that secret armies were being mobilised in the “bush” ready to attack the cities, dredging up dark memories of the country’s 27-year civil war and sending the country into panic.

A smaller group of opposition parties know as the POC (Coalition of Opposition Parties) tried to organise a vigil of their own for Sunday Mar. 6.

The Provincial Government of Luanda (GPL) refused on technical reasons. Fearful of a violent reaction, the group decided to obey the ruling.

POC leader Manuel Fernandes said: “The situation is very delicate and many of us have been threatened with our lives. We didn’t want a blood bath so we decided to stay at home for personal reflection about what to do next.”

The GPL however had no problem in allowing the MPLA to hold a rally which the party called “A March for Peace and Stability”.

State media claimed more than four million people took part, although the real number is probably closer to 40,000, many of whom are thought to have been forced onto public buses and made to attend.

MPLA Vice President Roberto de Almeida led a string of rousing speeches, reminding people about the gains made during peace and lambasting dissenters who wanted to challenge that and send the country back into war.

“The way the MPLA reacted was appalling,” explained Marques. “They tried to take advantage of the situation by creating confusion and fear and this has enraged people.”

Macedo agrees: “All this talk of war is ridiculous. Where is this war? There is no secret army; the war is in the MPLA’s head. How can they make so much or a deal about peace and then be threatening people?”

The government’s tactics have also drawn criticism from New York-based lobby group Human Rights Watch who have condemned what they called an “intimidation campaign”against opposition parties, journalists and citizens.

HRW Africa director Daniel Bekele said: “Angola’s ruling party should not scare people with renewed violence to deter them from freely expressing their views. Such disrespect of basic political freedoms does not bode well for Angola’s upcoming general elections in 2012.”

What happens next is not clear.

In April the MPLA is due to hold its extraordinary congress where it is likely there will be much soul searching about how to restore calm after the recent events.

Risk analysts say they do not forsee any major upheaval anytime soon, which will be some comfort for the armies of foreign investors involved in the country’s booming oil, diamond and construction sectors, but the winds of change have definitely started to blow.

Marques said he believed any change however would come not from an opposition or people’s uprising, but from the collapse of the MPLA which he said was riddled with insecurity, as its reaction this week had demonstrated.