NAIROBI, May 9 2011 (IPS) - Sub-Saharan African countries have claimed nine of the ten bottom places in a ranking of maternal health around the world. “The Mothers’ Index”, a new survey of motherhood by Save the Children, analyses health, education and economic conditions for women and children in 164 countries. 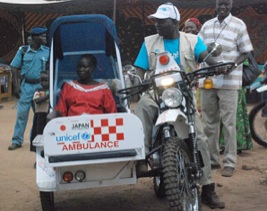 Motorcycle ambulance in South Sudan - distance to a healthcare facility and a shortage of trained personnel are key factors in maternal deaths. Credit: Peter Martell/IRIN

“Ironically, it is in giving birth – and multiple births for that matter – that a woman nears an approximate of the ideal of a wife,” says Kolorinda James, a traditional birth attendant (TBA) in Juba, South Sudan. “Children are considered to be a sign of wealth. It is a case of the content being valued much more than the container – as thousands of women in this region continue to die from pregnancy related complications.”

Some 250,000 maternal deaths occur in Africa each year. There are several factors that make childbirth in Africa so dangerous. Millions of early marriages and teenage pregnancies mean riskier births to young women whose bodies have not developed to fully stand the rigors of childbirth.

Africa’s health systems are inadequate to serve the needs of pregnant women, a majority of whom give birth without a skilled health worker present.

Across the continent, particularly in rural areas, a hospital or clinic with a trained midwife or doctor and facilities to deal with complications is often far away. The lack of good roads and transport – and the cost of transport – means a pregnant woman in trouble is unlikely to reach help in time.

Cost is also a factor for women and their families – even at highly subsidised public hospitals, the cost of giving birth can be beyond the reach of a woman living on a dollar or two a day. Many decide to give birth unaided at home, or with the help of an untrained attendant whose more modest fee can be paid in kind, with farm produce for example.

“Due to various factors such as poor infrastructure, most women deliver at home with no professional assistance and this leads to fatalities in many instances, because in case of a complication such as excessive bleeding, the woman will die,” says Ousmane Hadari, a reproductive health consultant in Niger.

In Niger, cultural factors also lead many women to choose to give birth at home, regardless of the risk. “The trend has been that many women will attend the antenatal clinic – in fact, the percentages of pregnant women attending clinic has gone up in many countries – but most of them prefer to deliver at home for various cultural reasons.”

Giving birth at home is seen as proof of a woman’s fearlessness in the face of pain, says Hadari, adding that women also prefer to give birth at home so that they can carry out a custom to bury the placenta soon after birth.

James says cultural factors are also at work in South Sudan. “For many women the thought of being delivered by a male health attendant is taboo.”

But the shortage of skilled birth attendants is a key problem. James is one of roughly 2,000 TBAs registered by South Sudan’s Ministry of Health who form the wafer-thin support for births in a population of 10 million. These TBAs have no formal qualifications, but James points out that TBAs have vast experience with deliveries acquired over years of practice. Traditional attendants enjoy the confidence of women in the community, and she says there are efforts to integrate TBAs into the health system as a means of drawing more women to hospitals for delivery.

“We are registered because we are not working in an ideal situation. There is a serious shortage of well-qualified nurses and midwives: what other options are there besides us?” says James.

Traditional birth attendants remain indispensable in a country where, according the Directorate of Nursing and Midwifery, there are barely more a thousand nurses – and only 40 who hold a diploma indicating basic knowledge of midwifery.

The World Health Organization (WHO) recommends that a skilled attendant be present at every birth, but in South Sudan there are only 10 nurses for every 100,000 births and just four adequately qualified registered nurses for every million children born.

South Sudan’s Ministry of Health reports 2,037 maternal deaths for every 100,000 births. Hadari says Niger is not much better.

“The picture is not so different in Niger which has a staggering maternal mortality and morbidity rate particularly among the rural women and especially those with little or no education and consequently low or no income.”

Niger ranked 163 in the Safe Motherhood Index, with 1,800 deaths per 100,000 births. One in seven Nigerien women will die from a pregnancy-related complication.

Initiatives to improve maternal health are under way all over the continent, in an effort to meet Millennium Development Goal commitments to reduce maternal mortality by three-quarters from 1990 levels. Many countries seem unlikely to meet that target by 2015, but there are some positive models.

According to a 2010 World Health Organization report, maternal mortality in Ghana has fallen by a quarter in the last decade, to 560 per 100,000 births. Ghana has achieved this by revamping training, now adding 500 new midwives each year. The government has also made efforts to post health professionals to the areas with the worst maternal health statistics.

Mozambique is another success story. Mozambique’s national health data shows maternal deaths fell from 1,000 deaths per 100,000 births in the 1990s, to 473 per 100,000 in 2007. This success has been built on the establishment of “waiting houses”, which permit at-risk pregnant women to move to a temporary home near a local hospital in order to facilitate quick access to skilled health care once labor begins.

As 2015 draws nearer, these and other measures will need to be adopted and adapted across the continent if MDG targets are to be met.

Although Sudan is faring poorly, the country may be moving in the right direction with the continued development of maternal care at the Juba Teaching Hospital, where an initiative to train more nurses and midwives is based.

Janet Michael of the South Sudan Ministry of Health says the emphasis is being placed on the “need for trained birth attendants, high contraceptive prevalence, improved infrastructure to enhance access for women in need of various institution based services and a budget that can sustain these initiatives.”