LUSAKA, May 18 2011 (IPS) - Proponents of microfinance often portray it as the empowering extension of credit to vulnerable but diligently self-employed poor people – often women – who support each other to improve their livelihoods as well as repay their loans. The image is true, to some extent, but in many parts of Africa, microfinance institutions have somewhat sharper teeth. 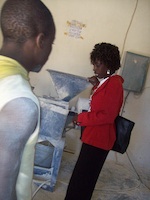 Microfinance institutions (MFIs) fill an important niche across the continent, offering savings and loans to people that the commercial banking system fails to cater for. From Guinea and Cameroon to Kenya and Uganda, modest minimum balances, low or zero monthly fees, and reasonable interest paid on balances are some of the attractions of MFIs to individuals and small business operators; and of course microfinance institutions loan modest sums to people wanting to start businesses – or just cover unexpected expenses – often accepting unorthodox collateral such as a family’s bed or furniture.

The Chawama Area Women’s Association, which groups 800 women in a cooperative enterprise, fits the profile. CAWA has run a maize-grinding operation in Chawama, a sprawling shanty town of about 250,000 people on the southern outskirts of Lusaka, for the past two years.

The association was given a hammer mill  – known locally as a chigayo – as part of a women’s empowerment project by the ministry of gender and development.

“Most of our members are either widows, HIV patients or housewives with severe financial challenges,” observes Rebecca Mwanza, vice-chairperson of the Association, “and this chigayo represents the only source of livelihood for them.”

The women are grouped into ten clubs that each use a share of profits from the chigayo to support other income-generating activities: some women make doormats, mops, or brooms; others sell fritters or popcorn, but the resulting income is then divided among the members of the club.

CAWA’s new cash flow called for something more elaborate than an old biscuit tin or tying crumpled bills into a corner of one’s chitenge cloth; commercial banks were out of the question, as the association did not have enough money to meet a minimum balance of 150 dollars, and didn’t want to pay hefty monthly fees.

So the association opened a savings account with Pulse Financial Services Limited, a microfinance institution. The account has an opening balance of 200,000 Zambian kwacha (about $40), no charges or administration fees, and pays interest of six percent. Mwanza is happy with the services from Pulse. “So far it has been excellent.”

In addition to its savings accounts, Pulse, which was established in 2001, makes loans to small and medium-sized enterprises that can put up collateral and a sound business plan. The loans are short-term – usually between one and six months, and the longer the term, the higher the interest; for a three month period the rate is 75 percent and loans with repayment periods longer than four months attract interest as high as 100 percent.

After CAWA received its chigayo, it turned to Pulse for a loan. To begin, they borrowed the equivalent of a 100 dollars to buy diesel for the mill. This was repaid – with interest – in two months and the milling enterprise was able to stand on its own.

Evans Mwape, a community support officer in the ministry of Gender and Development, observed that the work of his ministry would be less effective if it were not complemented by the existence of MFIs like Pulse.

“What the government usually does is to apportion money to the various ministries for development projects. This money is meant for fixed assets, you understand, and not recurrent expenses,” Mwape told IPS.

“This means that when we give a chigayo to a women’s group, we do not give them operational capital. It is up to them to find that capital and in this case the women of Chawama had to find money for diesel and other running expenses on their own,” Mwape explained.

Pulse Financial Services is not a charitable organisation, and not all of its clients repay their loans. “It is big trouble when a person fails to repay their loan,” says Mwanza. “There have been cases of many people defaulting on their loans in this township and Pulse have not hesitated to seize chattels. People have lost cars and household furniture here, I tell you!”

The Chawama Association was fortunate enough to receive its capital – in the form of the hammer mill – as a gift. Mwanza admits that if CAWA had borrowed the money to pay all or part of the cost of buying a mill, probably the business would not have been able to generate enough profit to repay the loan.

Pulse has proved the perfect banking solution for CAWA, however, and their milling operation has gone from strength to strength.

“Right now we are thinking of converting this chigayo from diesel power to electricity so that we may reduce our operational costs,” Mwanza said. CAWA is planning to borrow 400 dollars to buy an electric motor to power their mill instead of diesel.

CAWA member Queen Chitundu told IPS the group is also thinking of modifying the mill to churn out additional products, such as maize samp – used as meal by poor families – basic (commonly known as ‘roller meal’) and refined (commonly known as breakfast meal) maize flour and maize bran for farmers who use it as stock-feed.

“We believe all these plans will succeed and see us reach a new level if we remain close to Pulse as they have given us very wise advice on how to keep accounts in the past,” Chitundu said.