SWAZILAND: Disagreement on How South African Loan Should be Spent

MBABANE, Aug 16 2011 (IPS) - Despite the 2.4 billion emalangeni (342 million dollar) loan from the South African government to its cash-strapped neighbour, Swaziland is sinking deeper into debt. 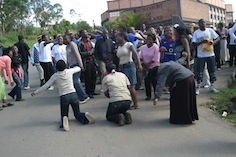 University of Swaziland students. The university failed to open this term because of a lack of funds from government. Credit: Mantoe Phakathi/IPS

While the money is yet to be given to Swaziland, the first instalment will be paid at the end of August, various institutions and organisations disagree on what government should do with the money.

Most of the Swaziland government’s business creditors feel the money should be used to pay them, while others believe it should go towards the country’s education institutions. The country’s only university and public schools have closed because of a lack of funds.

South African Minister of Finance Pravin Gordhan said the loan will be released in three instalments – at the end of August, October and February 2012.

“A lot of companies are closing down because government has not paid them,” said Hezekiel Mabuza, vice-president of the Federation of the Swaziland Business Community (FESBC).

“We hope government will use the loan from South Africa to pay us, otherwise more businesses will close down.”

FESBC has a membership of 500 small and medium businesses, and so far over 50 have closed down because government has failed to pay them for supplied goods and services.

“What’s worse, we can’t get stock on credit from South African suppliers because we have outstanding debts,” said Mabuza.

The country’s cash flow problems started in 2010 when Swaziland received 60 percent less of what it used to get from the Southern African Customs Union. The regional customs union used to contribute more than half of Swaziland’s national budget, but the revenue dropped after the global economic meltdown.

But the country’s education sector has also suffered a severe blow because of the lack of funds.

The reopening of the University of Swaziland (UNISWA), the country’s only university, has been put on hold because government does not have adequate funds for scholarships, which are awarded to all students who get accepted to the university.

According to UNISWA registrar, Sipho Vilakati, the institution’s budget for this academic year is 241 million emalangeni (34 million dollars). Government has not paid a cent towards the institution so far and the university, which was supposed to reopen on Aug. 08, after the holidays, is yet to begin lectures. “The date for the start of lectures this academic year is yet to be decided by the (university) senate,” said Vilakati.

Staff salaries have not been paid in recent months because of the lack of adequate funds. Public schools also had to close prematurely on Aug. 5 because government has not paid fees for orphans and vulnerable children and for ordinary pupils under the Free Primary Education Programme (FPEP).

Government is also yet to pay the Examinations Council 3.7 million emalangeni (528,000 dollars) for exam fees for orphans and vulnerable children.

“Unless we get the money to run schools, there is no way we’ll reopen for the third term,” said president of the Swaziland Principals’ Association, Charles Bennett.

Education is not the only sector affected by the economic crisis.

People Living with HIV/AIDS feel the money should be directed to the health sector, particularly to ensure that the country has adequate supplies of ARVs and services of HIV-positive people, such as home-based care.

“Government has repeatedly said the health sector will be prioritised, yet we see it crumbling because there are no drugs in hospitals and boycotts by staff have become the order of the day,” said president of the Swaziland National Network of People Living with HIV/AIDS, Vusi Nxumalo.

In July people living with HIV/AIDS took to the streets after the country’s buffer stock of ARVs fell below the prescribed three-month supply.

Since the loan was announced on Aug. 3, the Swazi government has remained silent on how the money will be used.

Instead, Prime Minister Barnabas Sibusiso Dlamini commended King Mswati III for obtaining the loan, further fuelling fury among progressives who had called on South Africa to withhold the loan to force Swaziland to democratise. The southern African country is ruled by the monarchy and political parties are not allowed to contest power.

“It goes to show how undemocratic some governments that appear to be democratic on the surface can be,” said Institute of Democracy in Africa programme manager Thembinkosi Dlamini, referring to South Africa.

Also furious about this loan is the Congress of South African Trade Unions whose spokesperson Patrick Craven said workers were disappointed at the vague conditions attached to the loan.

Annually, the Swazi government hosts the Smart Partnership Dialogue where the king and citizens from different sectors of society discuss development issues. However, political parties are excluded from these discussions.

The conditions by the South African government included broadening the dialogue to include all stakeholders and citizens guided by the Joint Bilateral Commissions for Co-operation agreement, which promotes democracy and the respect of universal human rights.

“So long as there are no strict conditions to compel the regime to concede democratic reforms and to share the country’s wealth among the people, the loan will simply be used to maintain the status quo,” said Craven.

And without the conditions for regime change attached to any loan, Swaziland will continue asking South Africa for more money, said secretary general of the Swaziland Federation of Labour, Vincent Ncongwane.

“Without fixing the loopholes, this loan is not going to help us,” said Ncongwane.

The IMF advised the Swazi government to reduce public servants’ salaries by 4.5 percent and politicians’ salaries by 10 percent to save government 240 million emalangeni (24 million dollars) a year. However, salaries remain untouched after trade unions opposed the move.

The IMF will return to the country at a date yet to be confirmed to further assess the fiscal situation.