BADIN, Sindh , Sep 19 2011 (IPS) - With just the clothes on their backs, Moora Sanafdhano, 68, and his family of nine waded through waist-deep flood waters swirling through their village of Allah Ditto Leghari, saving themselves in the nick of time. 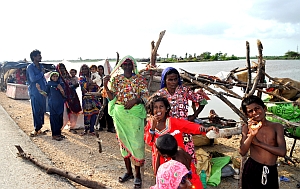 Their homes and rice paddies submerged by flood waters these Hindu Bheels await government relief in shelters set up on the main road. Credit: Zofeen Ebrahim/IPS

“We heard that the water rose up to nine feet,” says Sanafdhano, as the others nod in agreement. But, the lives of these mostly low-caste Hindus, considered the most marginalised group in Pakistan, are far from being out of danger.

They are being turned out of makeshift camps set up in schools, and relief material sent to them hijacked by people who know that low-caste Hindus are so abject that they would not dare retaliate.

Sanafdhano’s village is about 80 to 90 km from Badin town in Sindh province, and about 200 km from the provincial capital and port city of Karachi.

It is populated predominantly by low-caste Hindus – officially known as scheduled castes – such as Kohlis, Meghwars, Jogis and the Bheels, most of whom are sharecroppers for wealthy Muslim landlords.

The system of land tenure is so heavily weighted in favour of the landlords that these poor farmers and their families are as good as bonded labour. Sanafdhano says he owes his landlord about Pakistani rupees 50,000 (570 dollars) and is helpless in the face of a catastrophe such as the present floods.

“I’d grown rice on five acres of land and the standing paddy is all but gone,” says Sanafdhano. Estimates by the Sindh-Balochistan Rice Mills Association say the floods have damaged 20 – 25 percent of paddy crops in Sindh.

According to Pakistan’s National Disaster Management Authority a severe drought followed by abnormally heavy monsoon rains in August and September have severely affected seven of Sindh province’s 23 districts and disrupted life in 11 more.

The death toll now stands at 342 with some 1.2 million homes and 1.7 million acres of arable land destroyed.

The worst affected district of Badin has a population of 1.8 million people of whom 1.6 million have directly been affected by the floods. About 20 percent of the affected are low-caste Hindus.

Pakistan has three million Hindus and 2.5 million of them are from the scheduled castes, the upper castes having fled to India after the 1947 partition when British India was carved up along religious lines.

Some 6,000 villages in Badin have been wiped out by the floods and according to National Assembly speaker, Fehmida Mirza, who belongs to the area, there is no high ground left to set up rescue camps.

Officials deny that the Hindus are being discriminated against in the matter of relief. “Catastrophes see no caste, creed or religion,” says Dadlo Zuhrani, deputy district officer in Badin. “Relief activities are area specific, not community specific, and I protest against charges that we are discriminating against certain communities.”

But on the ground, for people like Sanafdhano, relief from the government and from aid agencies have passed them by. Unwritten caste rules prevent relief from reaching those who need it most.

“Those from the Hindu faith will never drink from the same well or vessel. They will also never eat from the same plate,” says Jewat Ram, a local schoolteacher. “Hindu masons may build a mosque, but never enter it, and Muslims who attend a Hindu wedding will not partake of food there. This is accepted, though the practice is slowly changing.”

But, Ram saw something in the camps which left him disturbed. “The school I teach in has been turned into a camp for the flood-affected people, but when three Hindu families from the Kohli caste sought refuge there, they were denied it.

“When the Kohli families insisted on staying, one of the men from the displaced Muslim community began contemptuously urinating in full view of the Kohli women and they had little choice but to leave,” said Ram.

“They treat dogs better than they treat us human beings,” said Ram in anger and helplessness.

Moolchand Sakromal, a Hindu government official who tried to give refuge to the Kohlis, says low-caste Hindus are probably the “most neglected” of Pakistan’s minorities.

“It’s a double whammy for them – they are poor and then they belong to the scheduled caste,” says Vikio Rajwani, a Hindu and head master at the government primary school.

The district administration in Badin has set up 278 camps in public schools and other government buildings, providing relief to 81,000 displaced people, but nothing has been assigned for the Hindus. Most of the displaced people from the scheduled castes are camping wherever they can on the roadside in makeshift tents, fending for themselves.

Even charities have shown a preference for giving handouts to displaced Muslims, rather than Hindus.

Donations of material made to Hindus do not reach them. A week ago the Pakistan Fisherfolk Forum (PFF), a non-governmental organisation, sent two truckloads of relief goods for 200 Hindu families in a camp set up in Golarchi (another town in Badin district), but it was hijacked by Muslims.

“When the truck reached our compound, some 20 armed men surrounded the trucks and began looting. Soon the police came and the PFF men were told by the police superintendent to leave,” said Shanker Das, a Hindu lawyer, who was present.

“Protests were made to the district coordination officer but even he couldn’t do much. All he did was to call up his deputy and order him to send rations, but in the end they were told point blank that there was nothing for them.”

Jabbar Habibiani, a politician associated with the newly formed Awami Jamhoori Party, says there is massive corruption in the distribution of relief with political affiliation given priority over actual need.

Officials deny widespread charges of inefficiency. “It is impossible to satisfy a man with a week’s rations for his family when he has lost his life’s savings; we are doing our best but our resources are limited,” said administrator Zuhrani.

In the midst of such chaos, the low-caste Hindu communities remain invisible. They have no representation in the local government. Even their votes are cast on their behalf by their landlords.