GOMA, DR Congo , Oct 16 2011 (IPS) - Five years into democracy, with the elections just a few weeks away, the majority of Congolese children continue to face a bleak future. 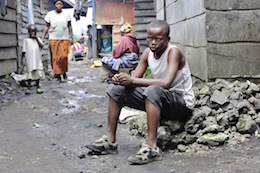 Years of war forced Passion, 13, to live on the street. Credit: Einberger/argum/EED/IPS

Years of bitter and bloody war in the eastern Democratic Republic of Congo (DRC) have destroyed thousands of families, forcing them into abject poverty and giving scores of children no choice but to live on the streets – as beggars, thugs and drug addicts.

Naino Riziki sits on the only chair in her small, rickety shack built from planks and rusted, bent-open petrol cans in Kabutembu informal settlement, one of the worst addresses in Goma, the provincial capital of North Kivu in eastern DRC.

The 34-year-old mother and her five children have been struggling to survive ever since her husband was killed in military crossfire about 10 years ago. The family lost their main income earner and with him their house and land.

Riziki, who sleeps with her children on straw mats on the clammy mud floor of her shack, tries to earn money by washing her neighbours’ clothes, but the income hardly feeds her children, and certainly cannot pay for their school fees of 20 dollars per trimester.

“The war destroyed my family. My children lost hope,” the mother says.

One day, Riziki’s two eldest, Passion and Elia, then 10 and 12 years old, decided to run away in search for a better life. They ended up on the streets of Goma where they slept under discarded cardboard boxes, became thieves and addicted to Marihuana and alcohol.

“We stole whatever we could. We were aggressive and violent. We did many bad things,” admits Passion*, today 13, whose growth was stunted by malnutrition.

The two boys belong to an entire generation of orphaned and poverty-stricken youth who have lost all hope for a better future. Located in the East African Rift Valley, Goma lies in a region that has been wrecked by years of fighting between the DRC national army and various armed groups, including Rwandan Hutu militias.

According to the 2009 United Nations Human Development Index, almost 80 percent of households in this Central African nation now live on less than two dollars a day. Child poverty is estimated to be even higher, says the United Nations Children’s Fund (UNICEF), with eight out of 10 children not having access to basic services, such as education, health, nutrition or safe drinking water.

“The situation of Congolese children is worrisome. Only about a third of children of primary school age attend primary school,” says UNICEF DRC monitoring and evaluation specialist Bertin Gbayoro.

Yet, going to school is the foundation stone for building a next generation who has the education to pull itself out of the poverty and suffering created by war, believes Désiré Safari, director of faith-based non-profit organisation Diakonie. The organisation recently launched a programme to rescue street children, reintegrate them with their families, offer psychosocial support and place them in schools in Goma.

“The lives of our children have been sacrificed by the war. Now the fighting is almost over, but the Congo’s problems are not solved,” explains Safari. “Those street children have become a danger to the whole society.”

There are no reliable statistics on the number of street children in the DRC, but Safari estimates that several thousand roam the streets of Goma alone, a city of about two million. Through the programme, Diakonie has managed to rescue a couple of hundred street children so far, says Safari, among them Passion and Elia, who have recently moved back home and started attending school.

Reintegrating street children in society is not easy – and certainly not always successful. Katsuva Siluhwere, headmaster at Mont-Goma primary school knows only too well how much work and patience it takes to work with children who are traumatised and often violent.

“They don’t know discipline. Some hit other children, some steal from them. It takes months for them to adjust to normal life, if at all,” explains Siluhwere, a short man in a well-worn, black suit. But when one of the former street children does well, all the sweat and tears have been worth it, he adds.

Only six months ago, 15-year-old Prince*, a shy, lanky boy in worn-out tennis shoes, belonged to a gang of street kids who “tried to survive somehow”, he explains in a low voice. “Not even the police helped us. All they did was threatening to arrest us, and then just stole the little money we had.”

Today, Prince lives with his parents, attends grade four and has big plans for the future.

“I want to become a lawyer, maybe even a judge,” he says, to help create a world that is a little more just.

But only a very small percentage of the DRC’s tens of thousands of street children have the opportunity to receive outside help. Aid programmes remain far and few in-between, and even Safari has to admit that Diakonie’s project has its limits and, perhaps most importantly, lacks sustainability.

“We need sound poverty alleviation and income-generation projects to link in with our programme if we want to keep children permanently off the street,” he explains. “We simply can’t pay school fees for all children in need.” At the soaring poverty levels the DRC experiences to date, however, this goal lies far in the future.