NAIROBI, Oct 27 2011 (IPS) - Three years after her husband’s disappearance, Phyllis Chamnai Kipkeyo from Mount Elgon, Kenya cannot stop thinking about him. She does not know if he is dead or alive. All she knows is that he was one of the over 300 people said to have disappeared during an insurgency in the region between 2006 and 2008. 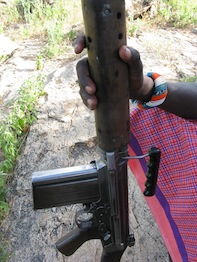 By 2008 the Sabaot Land Defence Force had been accused of murder and other atrocities. Credit: Isaiah Esipisu/IPS

“He was an (administrative officer in charge) of Chebwek sub-location (an administrative structure comprised of a number of villages) in Mt. Elgon. But on Friday Apr. 25, 2008, Kenyan army soldiers came to our house and took him away for questioning about the security situation in the area,” said Kipkeyo, 49, a mother of six.

The insecurity in the area began in 2005 after the militia group, Sabaot Land Defence Force (SLDF), was formed to seek redress for alleged injustices that occurred during a land distribution exercise in the Chebyuk settlement area.

But by 2008 the SLDF had been accused of killing several hundred people, and committing offences such as torture, rape and theft.

However, when the government launched a military operation to flush out the militia, both the Kenyan Army and SLDF arrested hundreds of people who were never seen again. Many are assumed dead.

A report released on Thursday by Human Rights Watch (HRW) appealed to the Kenyan government to open an inquiry into the arrests, to exhume suspected mass graves and to investigate atrocities committed by both the army and the SLDF.

The 48-page report called “Hold Your Heart” is based on field investigations and interviews conducted in Kenya’s Western Province, where Mt. Elgon is located.

HRW has called on the International Criminal Court (ICC) to determine whether crimes falling within the court’s jurisdiction were committed in Mt. Elgon and to consider opening an investigation into the violence.

“I also believe that the ICC should broaden its investigation in Kenya if the Kenyan government is unable or unwilling to carry out these investigations,” Ben Lawrence, a researcher at HRW, told IPS.

The ICC is currently prosecuting six suspected instigators of Kenya’s 2007 to 2008 post-election violence, when 1,200 people were killed, women were raped, homes and stores were looted and destroyed, and 600,000 people were internally displaced.

It is believed that the over 300 missing people were killed and buried in mass graves in Mt. Elgon, Lawrence said.

“Most of the residents we talked to pointed out 10 particular sites, which they said the army told them are areas where the bodies were buried,” said Lawrence, one of the lead researchers of the report.

Kipkeyo may have seen her husband just before he was buried in one of these mass graves. After his arrest she was instructed to give the army a list he had compiled naming members of the SLDF who had been terrorising the area.

“I had known about it. But on that day I was really confused to a point that I could not locate it immediately. But a few hours after they had left, I found the list and took it to the Chepkube tea factory, where the soldiers were camping,” she told IPS.

It was there that Kipkeyo saw her husband for the last time.

“He was lying on the ground soaked in blood. I could not tell whether he was alive or dead. I only saw him for a few minutes from a distance before I was chased away by the army officers,” she said.

The incident affected her psychologically, and a few days later on Apr. 28, 2008 she was found walking naked around a local shopping centre.

“We brought her home, (made her go for) counselling sessions until she recovered,” said her son, Robinson Sewui, 29.

“All I need to see is my husband’s body, whether dead or alive. If he is dead, I just need to see the remains, (and be able to) bury them so that I can have peace of mind,” said Kipkeyo.

Several women who lost their husbands are still psychologically affected by what happened, Lawrence said.

Currently the families of the missing men live in limbo, without being able to move forward emotionally or physically.

Under normal circumstances, the Kenyan government cannot issue a death certificate without a body. This poses a legal challenge because family members cannot inherit or rightfully own property belonging to these men until they are legally declared dead.

“I have already filed a case against the government at the Bungoma High Court in Western Kenya asking for the body of my husband,” said Kipkeyo.

HRW is helping the women file cases with both the Bungoma High Court and the East African Court of Justice.

“We are assisting some of them to lay complaints with the African Commission on Human and Peoples’ Rights, while others have filed complaints before the United Nations Working Group on Enforced or Involuntary Disappearances,” said Lawrence.