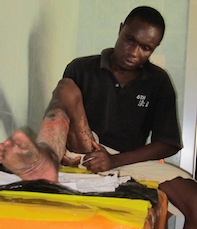 GREATAER ACCRA WEST DISTRICT, Ghana, Nov 24 2011 (IPS) - For the past 10 years, Buruli ulcer has been eating Benjamin Essel’s leg. The skin above his ankle is totally gone, and a swollen, pulpy and reddish wound rises almost up to his knee and wraps around his calf. Even still, this is an improvement over recent years.

“I thought it was just a sore,” says the 26-year-old Essel, who has been living in the Amasaman Hospital’s Buruli ward for the past two-and-a-half years.

Buruli ulcer is a tropical disease reported in about 30 countries, including Ghana, where doctors are this year predicting about 1,000 cases. Medical professionals say it is little known in afflicted communities and among staff at local hospitals, even though its early stages are easy to treat. It occurs in wet, rustic areas, and, consequently, its victims tend to be the rural poor.

Researchers know that it is caused by mycobacterium ulcerans, the same thing that causes leprosy and tuberculosis, but they are not sure how it is transmitted, which makes prevention very difficult.

Catching and curbing the disease in its early stages inevitably leads to full recovery with medication like antibiotics, but poverty, ignorance, spiritual beliefs, and underfunded health facilities conspire to stall treatment.

About 50 to 60 percent of this West African country’s victims end up with lesions like Essel’s or larger.

“This disease affects rural poor, whose voices are not heard anywhere,” says Dr. Edwin Ampadu, the country’s national Buruli ulcer chief. “The public has very little knowledge about this. When we had opportunities to bring this to the media or TV, people shied away. That is very sad, because when you talk to people, they think the disease is far away. But it is very close to this place.”

According to the World Health Organization (WHO), Buruli first surfaced in Uganda in 1897. Fifty years later, Australian researchers provided the first full description of the disease, and, in 1960, a rash of cases broke out in Buruli County, Uganda, giving the disease its modern handle.

Since 1980, it has spread across West Africa, and, in 1998, WHO began addressing it on a global scale. The disease is present in 30 African countries, as well as the Americas, Asia, and the Western Pacific. In Ghana, there have been 11,000 cases recorded since 1993.

Buruli comes in four progressive stages: nodule, plaque, oedema, and ulcer. The first stage is just a lump in the skin, while the fourth phase can produce wounds several times as dramatic as Essel’s.

While prevention remains a puzzle – some researchers in Australia think the disease may be transmitted by mosquitoes – early treatment could not be easier. According to a 2003 survey, all it takes is 20 to 50 dollars worth of antibiotics. On the other end of the treatment spectrum is a price tag of nearly 1,000 dollars, not to mention the social fallout from that degree of illness.

“Education is ongoing,” says Martin Oppong, the Buruli ulcer programme coordinator for the Ga West District, where Amasaman Hospital is located. “But it’s a disease that no one can pinpoint as to the mode of transmission, so people’s perception as to the cause determines where they seek help.”

Ghana’s National Buruli Ulcer Control Programme was struck in 2002, almost 30 years after the disease was first detected in the coastal province of Greater Accra Region. But doctors complain that it is grossly underfunded.

Amasaman Hospital’s ward exists mostly with the help of World Vision, the Christian relief, development and advocacy non-governmental organisation. In 2005, World Vision introduced a three-year programme to help with dressings, surgery, drugs, and general care, all of which are allocated from the government, but only every four months, and not in sufficient quantities.

World Vision also helps feed patients, who would otherwise have to fend for themselves, as the hospital does not pay for food. In 2008, the NGO renewed the programme. This September, it expired.

Meanwhile, Ampadu is trying to build capacity in other endemic jurisdictions. He wants to train more local health care providers on detection, so the disease can be caught and stopped in its early stages. He also wants to build surgical capacity, so doctors can perform skin grafts and other surgeries with minimal damage to the patient.

So far, capacity is spotty. While Amasaman has one doctor who can assist in operations with the guidance of a surgeon from Korle Bu Teaching Hospital, one of the country’s central medical facilities, larger places like Nsawam in Eastern Region have no one. Ampadu chalks this up to professional interest.

“The gaps are many in terms of capacity building,” he says. “We have very few doctors who have shown serious interest. The cases are not many if you compare to tropical diseases.”

And then there are the financial limitations. Ampadu frames the whole thing as an issue of corporate responsibility. As it happens, many of the afflicted rural areas are also hotspots for Ghanaian industries like farming and mining. He’s calling on more companies to provide funds for education and outreach so the disease can increasingly be stopped in its early stages, which is currently the closest thing to prevention available. It should be an easy fix.

“If we invest seriously in early prevention,” he says, “maybe in three years time I can assume that we will not see this ugly lesion.”