NAIROBI, Dec 28 2011 (IPS) - For Collins Otieno, the onset of a new day ushers in mixed fortunes that can either earn him some money or expose him to infection, as he struggles to make ends meet by scavenging for waste. 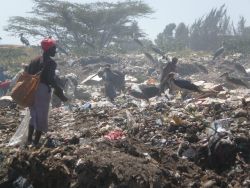 Many waste collectors at the Dandora dump on the outskirts of Nairobi are unaware of the dangers posed by medical waste. Credit: David Njagi/IPS

In the four years the 25-year-old has been collecting waste at Soweto, a Nairobi slum that is known to host a stretch of unlicensed clinics, he has seen colleagues incapacitated by septic wounds, while others have died from mysterious infections.

On a good day, he can make as much as Ksh. 300 (about three dollars) – enough to buy a packet of maize flour and a handful of vegetables which will last two days.

Otieno does not know whether he has been infected by the medical waste he finds mixed with other solid refuse in the garbage sites.

“There was a time I found a dead foetus dumped in the garbage,” says Otieno. “I was really scared but I informed a neighbour who helped me report the case to the police. I also find syringes and other sharp objects in the dumpsites.”

According to Dr. Linus Ndegwa, the programme manager for infection control at Kenya’s Centres for Disease Control (CDC), at least 0.5 kilogrammes of medical waste are generated for every person admitted in a hospital, and 20 percent of such waste is potentially infectious.

That makes at least 3,740 kilogrammes of waste generated in a month at the Kenya National Hospital (KNH), where about 7,500 patients are admitted every month.

But the figure is probably higher nationally, which would be clear if there were a system in place to map out the extent of the problem in public health facilities, while also factoring in the waste generated by unlicensed clinics, says Ndegwa.

That is not an easy feat, given that a crackdown on backstreet clinics in Nairobi alone keeps netting more than 15 clinics operating illegally every month, according to the Kenya Medical and Practitioners Board.

It is a problem that watchdog bodies have linked to greed, corruption and a claim by some Kenyan doctors that they are poorly paid compared to, for instance, those working in South Africa. Hence the lure for parallel sources of income.

“There are some clinics that have not been licensed and so there is no way of monitoring how they dispose their waste,” says Ndegwa. “This means that they use dumpsites within residential areas. This is where the main problem might be right now.”

But the problem of poor waste disposal goes beyond monitoring, even with a government policy that guides disposal of medical waste.

According to the Ministry of Public Health and Sanitation, a Waste Management Guideline developed in 2008 rallies the country to dispose of health care waste through incineration.

But the guideline has hardly met its obligation partly due to what environmentalists see as duplication of roles between government ministries performing almost similar functions.

Some of these functions, like waste disposal, have been entrusted to the National Environment Management Authority (NEMA). But some ministries like the Ministry of Environment still claim to have a hold on environmental issues.

This is where confusion over the implementation of the guidelines seems to come from, NGOs say.

According to officials, the government policy puts an emphasis on incineration, a process that is said to be harmful to the environment. They say non-burn technologies could proof safer.

The Professional Association of Therapeutic Horsemanship International (PATH) says incineration, which is often fed with plastic syringes, rubber gloves, polythene wrappers and a collection of materials that contain chemicals such as chloride, harms both Kenyans’ health and the environment.

When burnt, explains Fred Okuku, an official with PATH International, the waste may emit substances such as dioxins, which have the potential of causing cancer.

“These substances have also been proven to be persistent organic pollutants, a term that means they do not break down easily,” explains Okuku. “So they linger in the environment causing global warming and ozone layer depletion.”

The Green Belt Movement (GBM) identifies disposal of medical waste through burning as a growing concern to global warming, but which is not being given the attention it deserves.

According to Benjamin Kimani, a programme officer at GBM, the fact that it is not possible to track the amount of medical waste incinerated in Kenya due to lack of data from the government gives the problem a serious edge.

“Most forms of burning produce carbon dioxide in the form of smoke,” says Kimani. “This carbon dioxide contributes to global warming which in turn causes climate change.”

The possibility of releasing hydroflourocarbons (HFCs) is also high, because most medical waste is in the form of plastics, says Kunga Ngece, the programme manager for environment and climate change at the Swedish Embassy.

Plastics are known to contain high levels of CFCs, which are released into the atmosphere when broken down through burning.

For now, the hopes of waste handlers lie in the promise for the search for improved technologies to dispose of medical waste, according to the Public Health Act.

Some, like using autoclaves to sterilise the waste by generating steam at 121 to 130 degrees Celsius to kill pathogens, are being seen as a likely alternative, according to Okuku.

“The waste is then shredded into a mass of harmless material that can be disposed of in a public disposal site,” says Okuku.

It will probably also protect hundreds of Kenyans who handle waste from diseases such as HIV, hepatitis B and hepatitis C infection, due to exposure to blood and other body fluids found in needle sticks and other medical waste, says Dr. Daniel Yumbya of the Kenya Medical and Practitioners Board.

Studies also say this is likely.

According to an update of the 2006 Health Protection Agency (HPA) report, one in three people are likely to get infected with hepatitis B, one in 30 with hepatitis C, while one in 300 would contract HIV due to exposure from medical waste.

For Otieno however, he has God to thank for his apparent health, because like hundreds of other slum garbage handlers who do not use protective gear, the young man often does not have time or money to go for medical checkups due to the nature of his work.

But for Titus, whom fellow scavengers like Otieno know by his first name, luck ran out. Titus developed oedema of the legs, a condition that medics say causes the affected parts of the body to swell and could be a result of burns to the skin.

He will probably serve as a warning to some 60,000 street children scavenging garbage dumps in Nairobi, who medical professionals say face a risk of serious infections that is as alarming as it is real.

According to P.W. Wanjohi, a senior public health officer at Kenya’s Ministry of Health, the children are also exposed to tetanus.

But the government is yet to table a study outlining the extent of the risk, he says.

“These children are vulnerable because of their tender age,” says Wanjohi. “Most of them are still developing their body immune system.”