No Agriculture, No Deal 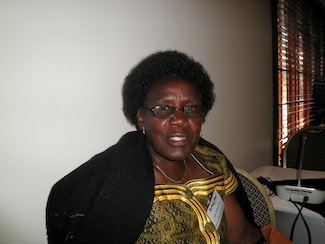 DURBAN, South Africa, Dec 1 2011 (IPS) - Zambian dairy farmer, Effatah Jele, does not believe in farming luck but in pragmatism because of climate change. “Farmers should be taught about good farming practises instead of blaming everything on climate change,” said Jele, who runs a dairy farm in the Luanshya Cooperbelt Province of Zambia and is the vice chairperson of the Dairy Association.

“Changes are there, no doubt, but it is also important for farmers to have the right farming practises for them to survive those changes. For example, some women are growing vegetables and, due to ignorance, dig the soil right up to edge of the river. Then, when it rains, the soil is all washed into the stream and after a few years the stream becomes shallow. And some say this is because of climate change.”

Jele said changes in the weather pattern have serious implications for farmers like her who depend on increasingly scarce water resources to keep a viable dairy herd. Crop farmers, she said, are worse off unless science and practical ideas come the rescue.

“I feel our scientists should go around talking to the farmers and making them understand the difference between climate change and self-inflicted problems through using the wrong ways of farming. That is important, because otherwise we will not find solutions that will ensure food security,” Jele said.

Fears of what climate change will do for African agriculture are real and in southern Africa farmers are taking action to ensure that negotiators at 17th Conference of Parties (COP 17) in Durban get the message.

The Southern African Confederation of Agricultural Unions (SACAU) – granted observer status at the United Nations Convention on Climate Change (UNFCCC) session – wants the global negotiations to put agriculture firmly on the climate change agenda and establish a work programme that will outline and coordinate necessary responses such as a specific allocation to the sector under the Green Climate Fund.

Climate smart initiatives such as conservation farming, water harvesting will not only help farmers cope with extreme weather but also ensure they curb carbon emissions. According to scientists, agriculture is responsible for between 15 to 30 percent of global emission of greenhouse gases such as carbon dioxide, which affects the earth’s temperature.

Farmers are campaigning for a deal that specifically includes agriculture, which will be heavily affected by climate change in terms of reduced crop yields and low productivity. For them productive and sustainable and farms are the insurance against the risks of climate change.

Noting the close links between the challenges of addressing climate change and feeding a growing global population, the International Fund for Agricultural Development (IFAD) President Kanayo Nwanze is to call on COP 17 to focus on helping half a billion smallholder farmers in developing countries to grow more food in environmentally sustainable ways.

According to research by the Consultative Group on International Agriculture Research, climate change will shrink agriculture productivity with projections of a rise in temperatures and an increase in droughts and floods, which would alter agricultural seasons and decrease harvests

“Our expectations as farmers of Southern Africa is to have agriculture included in the text that will be agreed at the end of the Durban COP 17,” said Stephanie Aubin, SACAU Policy Development Officer.

“Agriculture must be included in the specific text so that there are specific funds and specific action that are implemented.”

A draft text was discussed and negotiated during the past COP meetings in Copenhagen and Cancun but was dropped because agriculture was lumped together with bunker fuels.

“It is important that agriculture has special treatment at the UNFCCC negotiations because its special in terms of livelihoods for millions of people in Africa and food security for the planet and it’s the most climate sensitive sector which at the same time can contribute adaptation and mitigation efforts,” said Aubin.

“We want a specific chapter on agriculture in the text and long term action as it will unlock funding needed by the agriculture sector in Africa to response efficiently to Climate change.”

Aubin was optimistic that with the COP 17 being held in Africa, African governments will put the required effort to push for agriculture in the final text.

A grouping of 15 global and regional organisations have endorsed a call to action for COP 17 climate change negotiators stating that whilst agriculture is a contributor to greenhouse gas emissions, it has significant potential to be part of the solution to climate change.

“At the upcoming climate change negotiations in Durban, we call on negotiators to recognise the important role of agriculture in addressing climate change so that a new era of agricultural innovation and knowledge sharing can be achieved, said a grouping of global and regional, ” said the statement issued ahead of the Agriculture and Rural Development Day event to be held at COP 17.

“Specifically, we ask that they approve a work programme for agriculture under the Subsidiary Body for Scientific and Technological Advice so that the sector can take early action to determine the long-term investments needed to transform agriculture to meet future challenges.”

Bruce Campbell, Director of the CGIAR Research Programme on Climate Change, Agriculture and Food Security (CCAFS), told IPS that agriculture has been neglected in the negotiations so far, despite the sector accounting for between 16 to 29 percent of total emissions. Additionally, he said farmers, especially poor farmers in the developing world, are going to be particularly hard-hit by climate change.

“The agricultural sector must be empowered to take early action to determine the long-term investments needed to transform agriculture to meet future food and energy challenges effectively,” Campbell said. “The Agriculture and Rural Development Day will not only reflect this call-to-action, but it will also showcase a series of success stories in agriculture, which specific actions could be further scaled up with further investment and a coordinated approach to implementation.”