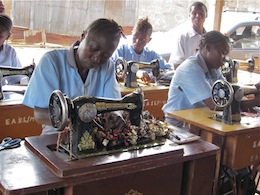 She remembers what it felt like: her heart jogged, darkness came over her, and later she regained consciousness on the floor.

No one knew what it was. She lost her job and the baby, and as the attacks kept coming, most of her friends, neighbours and family stayed away.

“When I get the attack and drop down, people are so afraid of me, they run,” says Kargbo.

Kargbo has epilepsy, a neurological condition that afflicts an estimated 60,000 to 100,000 people in this West African country of just over six million. Most are never diagnosed and only about 2,500 of them receive medical treatment. Sufferers here are often isolated, driven from their communities, and unaware that what they have is a highly treatable medical condition.

After Kargbo began experiencing seizures, her mother took her to a traditional healer. She was taken into a room and told to remove her clothes – and made to promise that she would not tell anyone what happened.

She wanted to get better, so she promised not to tell, took off her clothes and was molested.

Despite her promise, Kargbo told her mother. That was the end of traditional healers, she says with a smile.

Max Bangura, the coordinator and founder of the Epilepsy Association of Sierra Leone, has heard dozens of stories like Kargbo’s.

There is widespread belief that it is contagious, which further isolates people with epilepsy. Bangura says even those who have gone to medical centres for treatment have been referred to traditional healers because medical staff weren’t aware of the symptoms of epilepsy.

People with epilepsy are often driven from schools, jobs, homes, and subjected to traditional treatments that, he says, are “tantamount to torture” – cuts, burning, inhaling or drinking potions. One of the association’s members survived drinking two litres of kerosene. Girls and young women are subjected to sexual assault as a purported “cure,” says Bangura.

Treatment with phenobarbital, an anti-epileptic drug, costs 10,000 Leones (about two dollars) per month in Sierra Leone and is up to 70 percent effective in controlling epilepsy. But few people access it – and many cannot afford it.

“People do not come out. People do not want to be identified as having epilepsy,” says Bangura. “The stigma attached to the disease makes people not go to health centres because they don’t want anyone to know.”

The challenges of treating epilepsy in Sierra Leone are daunting. The country’s fledgling healthcare system struggles to cope with far more common — and deadly — afflictions such as malaria, diarrhoea and respiratory infections with little infrastructure and few professional health staff. It is one condition competing with many others in a system painfully short of resources.

Dr. Radcliffe Durodami Lisk, the only neurologist in a nation of about six million, runs the Epilepsy Project, which works with Bangura’s association to provide care throughout the country.

Funded by a British charity, the project runs three clinics in Freetown and one in Bo, the country’s second-largest city, which operate out of government hospitals. Workers travel to other areas of the country each month to disperse medication and provide care.

Sierra Leoneans have higher rates of epilepsy than most Western countries, due to risk factors such as meningitis, traumatic births and cerebral malaria.

Many patients cannot afford drugs, even at a cost of two dollars a month, says Lisk.

“It would be great if we could provide free treatment because most of these patients cannot work – no one will hire them,” says Lisk. “We end up giving quite a few patients free medication and trying to absorb the cost.”

But the biggest challenge, says Lisk, is convincing people to come forward and access treatment.

“They do not believe it’s a medical illness,” he says. “They don’t even think of going to see a doctor because as far as they are concerned, this is a demon or witchcraft.”

On a narrow lane behind a mosque in eastern Freetown, a handful of students lean over sewing machines under an awning that juts out from a partially finished building. The epilepsy association’s headquarters doubles as Bangura’s family home, and a vocational training centre, dubbed “The Love Institute” for about 20 people with epilepsy.

Here, people with epilepsy learn trades and are offered counselling, support and treatment. Bangura has been running the association for 11 years with funds from donations and membership contributions.

Chernor Dumbuya was carrying a basket of cooking items home from the market in Freetown, Sierra Leone, for his mother the first time he had a seizure. Thirteen at the time, Dumbuya dropped his load and fell to the ground with froth coming from his mouth. Everyone ran away.

The attacks kept coming, and no one knew what was causing them. Neighbours and friends were afraid of him.

Since starting treatment, he has had almost no attacks, and was the first graduate of the association’s three-year training programme, finishing in 2007 and carrying on to work as a tailor.

After years of living in isolation, Kargbo began taking classes here a year ago and the association connected her with treatment. She gets the money to pay for her medication from her church.

“If you expose (your illness), you get help.”