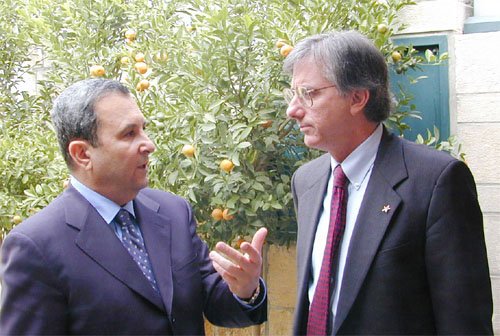 Speaking to an audience at the strongly pro-Israel Washington Institute for Near Policy (WINEP), Ross indicated that the Obama administration was keeping all options open and would take further steps, up to and including the use of force, to prevent Iran from developing a nuclear weapon.

“(A nuclear Iran) poses a threat to vital American security interests,” Ross said. “A nuclear Iran will trigger a regional arms race and undermine non-proliferation… It will lead to a situation where people can’t afford to wait.”

“President Obama has said all options are on the table. Force is not the first choice, but it is on the table, and time remains for diplomacy and pressure,” he stressed.

On the recent electoral victories of the Muslim Brotherhood in Egypt, Ross said that the Brotherhood has “evolved and are not the same as the Salafists”, the fundamentalist Muslim group that placed a strong second to the Brotherhood in the first round of parliamentary elections earlier this month.

“We should not view (the Brotherhood) as we have in the past, though we should keep a wary eye and not dismiss their ideology.”

Ross also advocated a low-key approach to Israeli-Palestinian peace negotiations, suggesting that the U.S. and Israel promote the Ramallah-centred Palestinian economy and enhance Palestinian security control in what is called Area B, the West Bank region currently administered by the Palestinian Authority but ultimately subject to the control of the Israel Defence Forces (IDF).

He made no mention at all of ongoing Israeli settlement activity in the West Bank and East Jerusalem.

Ross’ voice is an extremely important one, both because of the central role he played in Mideast peace negotiations under Presidents George H.W. Bush and Bill Clinton, as well as Barack Obama, and because of his renewed association with WINEP, where he was based during the administration of President George W. Bush.

WINEP is an influential voice on Capitol Hill. Established in 1985 by the powerful American Israel Public Affairs Committee (AIPAC), it has positioned itself as a key source of information and advice about the region to the White House, State Department and Congress.

In recent months, WINEP has been a leading voice for stronger measures against Iran, including the use of force.

The director of WINEP’s Military and Security Studies Program, Michael Eisenstadt, wrote in November, “(T)o succeed diplomatically and to deter, the United States needs to be ready to use force in response to further acts of terrorism by Iran, or to an attempt by Iran to build a bomb.”

“For the threat of force to work, however, it has to be credible, and it has to dramatically alter Iran’s risk calculus. Right now, neither condition is present. The United States ignores this state of affairs at its own, and its allies’ peril,” he continued.

More recently, WINEP’s Managing Director, Michael Singh, a veteran of the George W. Bush administration, wrote that “the Iranian regime is unlikely to extend us the courtesy of waiting until we have exhausted all sanctions and diplomacy before going nuclear”.

“The surest way to put off that date and buy breathing room for a diplomatic strategy is to convince Iran’s leaders that while we are not eager for a conflict, we are prepared to fight and win one if necessary.”

Ross was initially brought into the Obama administration as the State Department’s special advisor for the Gulf and Southwest Asia, a post he held from February to June 2009.

He then moved to the White House where he has served as special assistant to the president and as senior director for the “Central Region” at the National Security Council – essentially the civilian counterpart of the chief of the Pentagon’s Central Command (CentCom), covering a region stretching from Egypt to Afghanistan.

While adept at keeping a low profile, Ross has focused in particular on U.S. policy toward Iran, about which he has hawkish views, and on Israeli-Arab relations, especially the U.S.-led Israeli-Palestinian “peace process”, which appears to have reached a dead end under his supervision.

His announcement last month that he was leaving the administration – and the announcement by WINEP just a few hours later that he was rejoining their ranks – sparked speculation about his reasons for leaving.

Although he stressed that he had promised his wife to leave after two years, which he had stretched to almost three, some observers speculated he no longer wanted to defend the administration’s policies to the right-wing leadership of the organised Jewish community.

With his strong association to major Jewish institutions, Ross, who has been characterised by some of his Palestinian interlocutors as “Israel’s lawyer”, has served as a shield for the White House against attacks by Israeli Prime Minister Benjamin Netanyahu and his allies here.

In his remarks Tuesday, Ross continued to defend the administration’s policies.

Responding to a question regarding the continued viability of a two-state solution to the Israel-Palestine conflict, Ross offered little optimism that such a goal was still attainable, but insisted there was no viable alternative.

Ross has long been viewed as a problematic negotiator between Israel and the Palestinians due to his perceived bias toward the Jewish state.

Indeed, after leaving his job as Middle East envoy during the early days of the George W. Bush administration, he became the founding chairman of the Jewish People’s Policy Institute (JPPI), a Jerusalem-based think tank that was established by the Jewish Agency for Israel.

Ross was also a founding member of United Against A Nuclear Iran (UANI), a hawkish group that has mounted an aggressive public campaign to highlight the alleged threat posed by Iran to Israel and the U.S.

As election year campaigning ramps up, a voice like Ross’s, coming from a bastion of the powerful pro-Israel lobby like WINEP, is likely to be taken very seriously when he says, “We still have time and space to ramp up the pressure (on Iran) and prevent them from developing nuclear weapons. This must be the objective, not living with a nuclear Iran.”