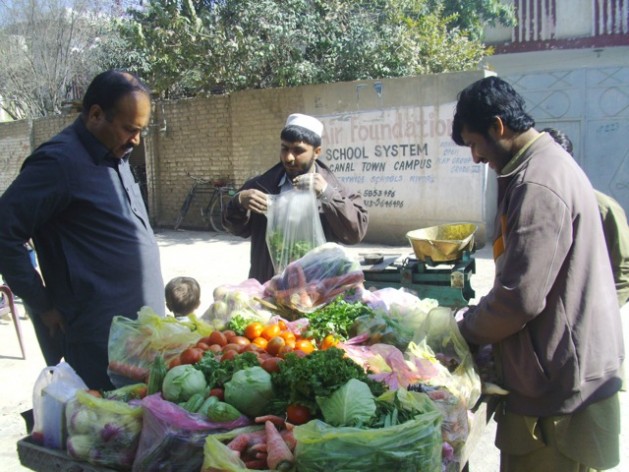 PESHAWAR, Feb 22 2012 (IPS) - The Khyber Pakhtunkhwa government recently launched a harsh crackdown on illegal Afghan immigrants who have been pouring across the border into Pakistan, going so far as to request federal government permission to deal with the situation, which has deep social and economic implications for the host country.

During the Soviet invasion of Afghanistan in 1979, about five million Afghans entered Pakistan through the porous 2400-kilometre-long border between the two countries.

According to the United Nations Refugee Agency (UNHCR), Pakistan is home to 1.7 million documented Afghan refugees. Meanwhile, data compiled by Pakistan’s home and tribal affairs department found that the country was simultaneously playing host to 400,000 undocumented Afghans, many of who live in the Khyber Pakhtunkhwa (KP), one of the Pakistan’s four major provinces.

For the refugees and immigrants, Pakistan is the only escape from a life of poverty and persecution.

Haji Dost Muhammad, an elder of the Afghan Refugees Jirga (tribal assembly), told IPS that many of his people could not return due to a lack of electricity, water and education in their home country.

“Our children have been born and brought up here and now they don’t want to go back as they are getting an education here. When the situation improves in Afghanistan, we will all go back,” he said.

But many Pakistanis, from government officials to local business owners, are frustrated by the weight of a refugee population that has encroached upon the local business sector and is allegedly responsible for a major surge in crime rates.

The Federal Investigation Agency (FIA) and police have so far failed to investigate undocumented immigrants under the country’s Foreigners Act.

A government official told IPS that the federal government should make arrangements to block undocumented Afghans from entering the country and make more of an effort to settle an issue that has been lingering for decades.

The home department recently briefed the provincial cabinet on the presence of refugees and unregistered Afghans in the region, concluding with a proposal to deport all illegal residents from the province, with the government’s permission.

However, in January last year, a Tripartite Commission – which includes the UNHCR, Pakistan and Afghanistan – agreed to extend Afghan immigrants’ stay by two years, owing to conflict in the sending country.

The government official lamented that these “vague” immigration policies were an impediment to a long-term solution.

“While the issue is being discussed by the inappropriate authorities (such as the Islamabad-based tripartite commission), the prolonged stay of Afghans has resulted in multiple socioeconomic problems in Khyber Pakhtunkhwa,” he told IPS.

He contended that since the people of KP and the Federally Administered Tribal Areas (FATA) are forced to suffer the consequences of rampant immigration – such as competing with cheaper labour – these provinces should have a say in the decision-making process; however, Islamabad has thus far ignored local voices.

A recent report by Pakistan’s home department found that, in addition to the refugees and immigrants in the North, approximately one million Afghans were illegally residing in Islamabad and other parts of the country, many of who were also running their own businesses.

In addition, the report said that Afghans had obtained false computerised national identity cards (CNICs) and used them to set up shops, maintain bank accounts and purchase property and vehicles.

“We have (found) that about 80,000 Afghans have obtained illegal CNICs. We are now very strict. We have taken action against hundreds of Afghans for getting fake CNICs,” said Jawad Ali of the National Database Registration Authority (NADRA).

According to official data, over 14,000 Afghan students were studying in various public and private sector educational institutions, while 470 Afghan prayer leaders have been identified.

Following numerous reports that these religious figures were promoting extremism and religious disharmony among various sects, sources said that 164 of them had been removed from their jobs. The ministry of interior recently gave police the green light to take immediate action against the remaining religious leaders.

Despite deploying a Border Management Force, the influx of Afghans through unfrequented routes continues unchecked.

So far, there is only one border opening at Torkham, which is not sufficient to facilitate the passage of hundreds of Afghan refugees everyday.

The home department also suggested that the ministry install a biometric system and set up joint checkpoints along the border to check illegal movement.

Representatives for the Afghan refugees, like Haji Dost Muhammad, insist that Afghan visitors in Pakistan are committed to abiding local laws. He went so far as to stress that those involved in crimes should be arrested and deported.

But for some, like KP’s law minister Arshad Abdullah, the problem is already out of control and requires swift action, such as immediate deportation of all illegal residents.