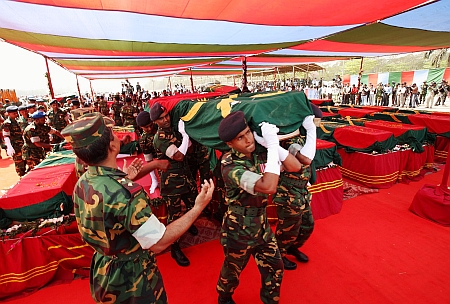 Coffins of the 57 army officers killed in an armed forces mutiny in 2009. Credit: Shafiqul Alam Kiron/IPS

On Jan. 19, the army brass disclosed that it had foiled a coup attempt masterminded by some mid-ranking army officers and that several have been either confined or put under the scanner.

At a rare press conference in the Dhaka cantonment, Brig. Gen. Masud Razzaque, flanked by senior officers, said: “Specific evidence has been unearthed that a group of retired and serving officers have been involved in the conspiracy to topple the democratic government through use of the armed forces.”

Razzaque said two of the alleged conspirators had admitted to having connections with the outlawed political party, Hizbut-Tahrir (HuT), suggesting that religious extremists continue to maintain links within the country’s armed forces.

The HuT website openly urges army officers to “Remove Hasina, the killer of your brothers and establish the Khilafah to save yourselves and the Ummah from subjugation to U.S.-India.”

“Initial investigations suggest that links with non-resident Bangladeshis could not be ruled out,” Razzaque said, hinting that forces inimical to Bangladesh’s 1971 liberation from Pakistani rule were at work and may also have had a hand in the coup conspiracy.

The HuT is known to have strong links with Bangladeshi expatriates in Britain along with other Islamist groups such as the Jamaat-e-Islami (JeI) opposed to the professed secularism of the AL and to the 1971 liberation.

This was the first time that the defence establishment has admitted to extremists in its midst, though the country has seen a series of coups, starting with the one in which Sheikh Mujibur Rehman, the founder of Bangladesh and father of Sheikh Hasina was killed.

Indeed the army is known for the deep divide that exists between officers who fought for Bangladesh’s liberation and those who did not and this has fomented no less than 19 coup attempts.

Significantly, the January coup attempt follows the execution of a number of officers convicted for the assassination of Sheikh Mujibur, 40 years ago.

Hasina has also put on trial several religious political leaders, including the former chief of the Jamaat-e-Islami (JeI), Golam Azam, for alleged collaboration in the genocide committed by the Pakistani military in trying to bludgeon Bangladesh’s struggle for independence.

The JeI is one of the key allies of the four-party main opposition led by the Bangladesh Nationalist Party (BNP) of former prime minister Khaleda Zia.

The path for the trials was cleared on Mar. 25, 2010 when the government set up a special tribunal to try the religious leaders for their alleged crimes against humanity committed during the country’s liberation war four decades ago.

Five of the JeI’s top leaders, including its party chief, Prof. Motiur Rahman Nizami and secretary general, Ali Ahsan Mojaheed, both former ministers in BNP government, are currently being held in prison.

Soon after taking office for the second time in January 2009, the Hasina government banned 12 religion-based organisations suspected to have strong militant bases across the country.

Among them was Jamaat-ul Mujahideen, Bangladesh (JMB), the second largest Islamist organisation and one that is believed to have links to the banned Pakistani terrorist group Lashkar-e-Toiba (LeT).

After the JMB carried out 500 synchronized bombing attacks in almost all the 64 districts of the country on August 17, 2005, police have arrested over 200 of its members.

Many of its leaders have been executed, including its founder – Shaikh Abdur Rahman and the man known to be second in command, Siddiqul Islam, popularly known as ‘ Bangla Bhai’.

But, the arrest of about 100 JMB activists since October 2008 and the unearthing of huge caches of firearms, explosives and ammunition demonstrated the JMB’s ability to regroup, recruit and reorganise.

The Hasina government faces increasing challenges in restoring a secular outlook for the country’s polity originally promoted by her father and the Awami League (AL) party as opposed to the more Islamist face of the opposition.

Significantly, Khaleda Zia alleged at a rally held in Chittagong on Jan. 9 that the government had kidnapped certain army officers and was torturing them. While Khaleda’s statement was refuted by the army, it admitted to trying officers for ‘dereliction of duty’.

Over the years Hasina’s pro-liberation, secular AL party has faced violent challenges from the so-called Islamic nationalist and anti-liberation forces which apparently also do not believe in democratic principles.

Hasina’s government has also been extending friendly gestures to India which helped Bangladesh in its struggle for freedom from the military junta then ruling Pakistan.

After being swept back into office in January 2009 with a two-thirds majority in parliament, Hasina’s 14-party grand alliance restored the four fundamental secular principles of the constitution enacted by her father.

That step angered many religion-based political parties. In February 2009, the national border guards, then known as the Bangladesh Rifles mutinied killing some 70 people including 57 army officers.

The revolt was believed to have been orchestrated by anti-liberation forces and the names of the religious extremist groups were not far down the list of suspects.

It is unlikely that the Bangladesh army would venture to take over power from a democratically elected government – that would jeopardise its prized role as top international peacekeeper – but it will certainly have to deal with extremism within its ranks, as the January events show.