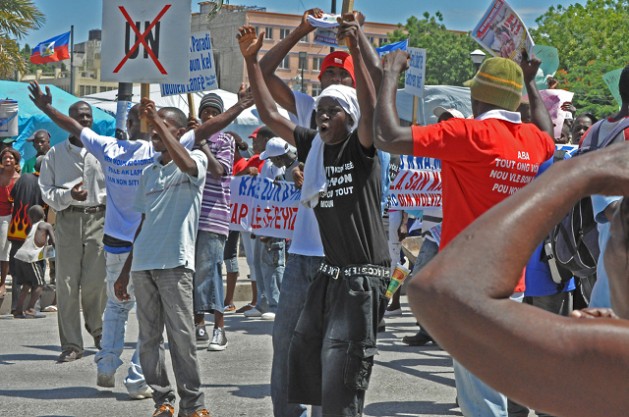 Ten months after the earthquake in Haiti, protestors condemn NGOs and the U.N. for lack of shelter and basic services. The back of the man's red T-shirt says in Creole, "Down with NGO thieves/ We want good houses to live in." Credit: Judith Scherr/IPS

Meanwhile, about 600,000 Haitians still live in squalid camps, often lacking water and sanitation. Many face eviction. (The 600,000 doesn’t include evicted survivors living on the streets or in red-tagged houses.)

“The international community is complicit with the rich people in Haiti to gut the rights of Haitians,” Joseph said, noting that he’s successfully trained camp leaders to organise others to effectively stand up for their right not to be evicted.

Creole and French translations of the book will be published later this year, which means Tectonic Shifts can be used as an educational and organising tool by grassroots activists and human rights workers, Schuller said.