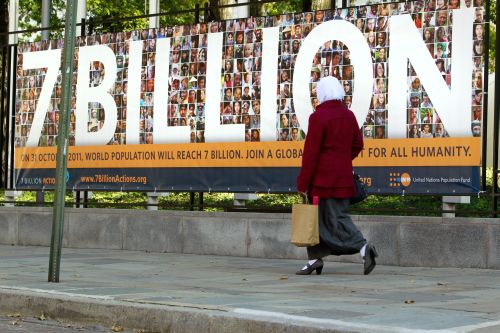 But keeping pace with this growth is the increasing south-south cooperation among developing nations who are sharing innovative experiences in reproductive health, family planning, gender empowerment and the integration of population into development planning.

Among others, Rao singled out Brazil, China, India and South Africa as some of the countries making significant contributions to south-south cooperation.

The PPD, which he represents in New York, was launched at the 1994 International Conference on Population and Development (ICPD) specifically for promoting and strengthening south-south cooperation in population and reproductive health.

“While on the one hand it reflects mankind’s enormous success in reducing mortality and improving quality of life for billions of people, on the other, it raises the serious challenge of the social, political, environmental and developmental implications of adding additional billions of people so rapidly,” the book says.

According to the 260-page publication, the world population did not reach one billion until 1804.

Asked about the highlights of south-south cooperation in reproductive health, Rao said the governments of Egypt, India and Morocco have offered long-term fellowships for graduate education in population and public health.

A successful interregional network of about 25 premier partner institutions (PIs), all active in the area of population, reproductive health, public health and development, have been established by PPD, for capacity building in its member countries and others.

The PIs are collaborating in adapting each other’s training programmes and have signed letters of understanding on collaboration.

Rao said experience indicates that first-rate technical capacities exist in the population and reproductive health fields at the PPD network of PIs, and greater efforts should be made in the future to fully capitalise on such capacities through south-south and triangular cooperation.

In the important area of information exchange and experiences, PPD has succeeded many times in the past and most recently has catalogued, in collaboration with UNFPA and the Special Unit for South-South Cooperation at UNDP, innovative experiences that have led to success in member countries’ addressing population, reproductive health and development challenges.

He also said that advocacy and policy dialogue activities undertaken by PPD on urgent topics in population, reproductive health and development in the form of international conferences and workshops for member and non-member countries have been most successful.

Asked about shortcomings, Rao told IPS, “To my mind, there are at least two programmatic or practical limitations.”

Firstly, the successful experience is almost always documented retrospectively and thus, many important decisions crucial to its success are missed out due to recall lapse, while documenting the experience.

There is often a lack of recorded details, made worse by turnover over time of staff responsible for design and implementation of the practice in the country.

And most importantly, managers and documenters of the practice are not always the same people, making it difficult to achieve a balance in substance and narration.

Secondly, designing and implementation of programmatic interventions are frequently fine-tuned to dovetail with the political, cultural, administrative and human capital imperatives of a given country, making adaptation of the approach to other contexts sometimes challenging, he noted.