SAN SALVADOR, Mar 23 2012 (IPS) - “You see? That’s where they were going to put the antenna,” says Alicia Suncín, pointing to a spot in the middle of a park in the Salvadoran capital where a private company was planning to erect a cell phone tower, 10 metres away from swings and see-saws where children play. 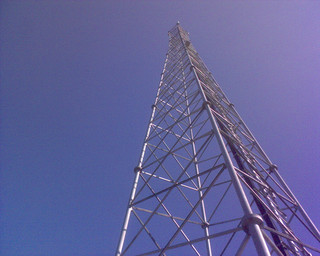 Local residents in the Salvadoran capital are fighting the installation of cell phone towers in their neighbourhoods. Credit: Karl Baron/CC BY 2.0

Its construction was thwarted thanks to protests organised by Suncín and her neighbours, who formed a Coordinating Committee for Communities Affected by the Installation of Cell Phone Towers in December 2011.

Some 1,000 families from Suncín’s Santa Fe neighbourhood in the north of the capital of El Salvador and from other parts of the city are taking part in the protests, because they fear the potentially harmful health effects of the electromagnetic radiation emitted by the cell phone towers.

“How can I live next to a 33-metre tall antenna that emits radiation, which is a health hazard?” Suncín remarked to IPS.

After years of debate and international scientific studies producing results both for and against this claim, the International Agency for Research on Cancer (IARC), part of the World Health Organisation (WHO), said in a May 2011 communiqué that radiofrequency electromagnetic fields emitted by wireless communication devices are “possibly carcinogenic to humans.”

“They are a danger to our health and that of our children; we don’t want these cell phone towers here,” said Zulma Handal, also a member of the Coordinating Committee.

A number of studies have found evidence of symptoms of ill-health such as fatigue, headaches, sleep disturbances and memory loss among people who live within 100 metres of mobile phone towers.

At present, dozens of cell phone towers are scattered across the urban landscape of the Salvadoran capital, which is home to 1.5 million people.

Some of the antennas were built after telecommunications were privatised in 1999, but in recent years their number has multiplied in line with the telecoms companies’ need to expand their networks and provide wireless internet services.

About 7.5 million cell phones are in use in this Central American nation of 6.2 million people.

One of the transnational corporations involved in the mobile telephony sector in El Salvador is América Móvil, owned by Mexican magnate Carlos Slim, the richest man in the world according to the Bloomberg Billionaires Index.

Under its trademark Claro, the company operates the largest mobile phone network in the Americas. América Móvil is the privatised successor to El Salvador’s state-run National Telecommunications Administration (ANTEL), which was sold to France Telecom in 1999 and acquired by Slim in 2003.

Also present in the Salvadoran market are the Spanish firm Telefónica and the Jamaican company Digicel.

When the metal towers were first installed in San Salvador, they were purportedly to be used for closed circuit video surveillance cameras in parks and recreation areas, as part of a public safety initiative by the mayor of the capital city, Norman Quijano of the rightwing Nationalist Republican Alliance (ARENA).

However, in several communities and neighbourhoods IPS was able to verify that the towers are in fact being used for wireless telephone services, including one in a park in Centroamérica, a neighbourhood in northwest San Salvador.

In a document dated Nov. 24, 2011, signed by Rafael Henríquez, the city councillor for San Salvador’s District 2, the municipality gave permission to Collocation Technologies of El Salvador “to carry out the installation of towers or telecommunications structures in Centroamérica Park.”

Local residents say this company is subcontracted by one or other of the telecoms companies to install cell phone towers. “They put one in Centroamérica Park and now they want to put one in our neighbourhood, but we won’t let them,” said Suncín.

The San Salvador mayor’s office responded that no one was available to be interviewed by IPS.

Residents of the areas where telecoms towers have been located are calling for their removal. “Fortunately there is a social movement of citizens who are against them and are not just waiting until cancer victims appear,” Gregorio Ramírez, an activist with the Salvadoran Ecological Unit (UNES), told IPS.

Human rights ombudsman Oscar Luna added his voice to the criticism, complaining that the structures were built without informing or consulting the local population.

The conflict between protesters and the city government of San Salvador occurred during the election campaign for mayors and city councillors which led to Quijano’s re-election as mayor Mar. 11. Quijano said the protests were politically motivated and designed to prevent his re-election.

Article 11 of the municipal regulations for mobile phone tower installation empowers the mayor to authorise their placement, on condition that they do not obstruct any right of way and are not placed on median strips or traffic islands, or on land adjacent to houses.

This last requirement was in danger of being violated in the case of the tower planned for construction in Santa Fe, because the chosen site is only a few metres away from several houses, as IPS was able to confirm.

So far, the national government has remained silent.

“State institutions ought to issue a statement, including an investigation into what regulations the mayor’s office followed when it granted permission for the towers, backed up by the WHO reports that say the radiation is harmful,” Nayda Medrano, the executive director of the Consumer Defence Centre (CDC), told IPS.

Many consumers have complained about the telephone service since it was privatised, citing overcharging and other problems.

The CDC reported that fixed charges for a residential landline in El Salvador amount to nearly 10 dollars a month, compared to just 2.10 dollars in neighbouring Honduras, 3.58 dollars in Nicaragua, and 5.36 dollars in Guatemala.

Although El Salvador has a telecommunications law and a regulatory agency, analysts say foreign companies have raked in profits during the wave of privatisations that swept the country, and the rest of Latin America, in the 1990s.

But although the country’s first leftwing government took office in June 2009 with the victory of the Farabundo Martí National Liberation Front (the FMLN guerrilla movement-turned political party), very few changes have occurred, the local residents complained to IPS.

The Coordinating Committee for Communities Affected by the Installation of Cell Phone Towers has asked parliament to ban the installation of mobile phone towers close to population centres.

Activists want the legal ban to include the precautionary principle formulated by the United Nations Conference on Environment and Development in 1992, which has been taken into account by countries like Argentina and Chile.

The precautionary principle states that, even if a cause-and-effect relationship has not been fully established scientifically, if the product or activity poses a threat to health or the environment, precautionary measures should be taken.

Although the families in Santa Fe are optimistic, they know they are up against powerful economic and political groups. “It’s a case of David against Goliath,” Suncín said.