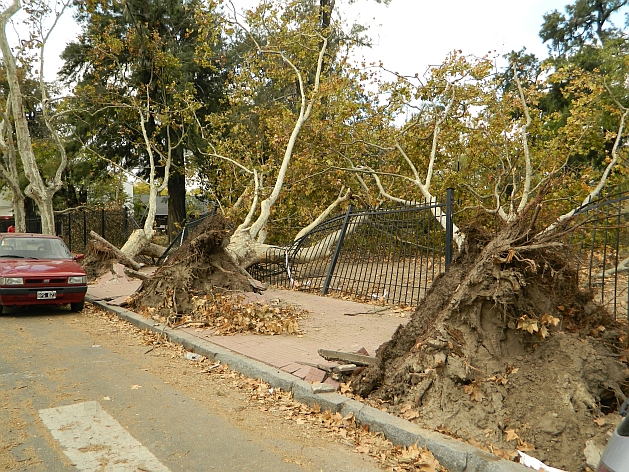 Trees uprooted by the storm in the neighborhood of Barracas, Buenos Aires. Credit: Juan Moseinco/IPS

BUENOS AIRES, Apr 17 2012 (IPS) - The 18 deaths caused by a storm that hit Buenos Aires earlier this month tragically demonstrate the lack of preparedness for the ever more frequent and powerful weather events faced by the Argentine capital and its suburbs.

“Argentina should be accustomed to severe storms because it has always had them. What is accelerating now is the intensity and frequency of rains,” meteorologist Carolina Vera told Tierramérica.

In addition to the fatalities, the Apr. 4 storm placed 32,000 families living in vulnerable neighborhoods in a state of emergency. More than 200 schools were totally or partially destroyed, thousands of people were left without electricity or water, and around 40,000 trees were toppled.

“In our neighborhood two kids died. A tree fell on top of a 13-year-old, and a wall fell over onto a teenager who was sleeping on the street,” reported Lorenzo de Vedia, a Catholic priest in a precarious area on the south side of the capital.

The neighborhood in question, known as Villa 21-24 de Barracas, was one of the hardest hit. “Roofs were blown off, mattresses were soaked… These are the results of the structural poverty in which these people live,” de Vedia told Tierramérica.

The federal capital district, the Autonomous City of Buenos Aires, and its metropolitan area comprise a total area of 3,833 sq km with a population of 12.8 million people, according to the 2010 census.

The storm broke out suddenly, bringing torrential rain, hail and winds of almost 100 km an hour in some parts of the west and south sides of the city and its surrounding area.

The most precise and continuous meteorological records kept in Argentina correspond to rainfall, and date back more than a century. These records “demonstrate a tendency towards an increase in the abundance and frequency of precipitation,” said Vera.

The natural variability of the atmosphere could account for these types of storms on its own, but in this case “there is evidence of an association with climate change,” she added.

Vera, who is the director of the Centre for Marine and Atmospheric Research at the University of Buenos Aires, is also one of the authors of the Special Report on Managing the Risks of Extreme Events and Disasters to Advance Climate Change Adaptation (SREX), released Mar. 28 by the Intergovernmental Panel on Climate Change (IPCC).

Numerous research reports compiled by the IPCC show a relationship between extreme events and climate change, but for other phenomena, such as heat waves, said Vera.

However, climate modeling based on future scenarios of increased greenhouse gas emissions result in predictions of increased precipitation in central and east Argentina, she noted.

Given these projections, Argentina is not very well prepared, said Vera. The country needs more weather radars, more human resources to operate them, and contingency plans to deal with disasters.

“The government has purchased radars that allow us to improve forecasting, but there is a lack of qualified personnel. People need to be trained. There are plans to do it, but today the National Meteorological System is not fully prepared,” said Vera.

Accurate forecasts alone are not enough, either. Once an alert is issued, the population needs to know what to do. “We still don’t see disaster management actions. People panic, and many of them live in houses with sheet metal roofs that blow away,” she commented.

For Claudia Natenzón from the Research Programme on Natural Resources and Environment at the University of Buenos Aires, the main problem is that “preventive actions are not being developed.”

Natenzón, who holds a PhD in geography, specialises in the study of social vulnerability to climate change. She explained to Tierramérica that prevention implies anticipating a weather event in order to prevent serious damage when it occurs.

This requires scientific knowledge about what can happen – although there is always some degree of uncertainty involved – and the use of that knowledge to develop prevention plans.

In a storm, the “entry points” that increase risks include old or diseased trees that have not been pruned, electric cables, sheet metal roofs that get blown off by the wind, and polycarbonate roofs that are destroyed by hail, she explained.

Other risk factors include ever more abundant billboards held up by structures that cannot withstand gale-force winds, and free-standing roofs not supported by walls, such as in gasoline stations and market stalls. One of these roofs collapsed during the last storm and crushed a young man.

The failure to implement preventive actions was clearly demonstrated by the storm, said Natenzón.

One of her Research Programme colleagues, anthropologist Ana Murgida, acknowledged that “some measures can be costly,” but stressed that “the cost of a disaster is always greater, and must be borne by the public coffers. And disasters always impact more seriously on the most vulnerable sectors.”

Buenos Aires is a coastal city, and as a result, it needs to be prepared for more frequent and more damaging flooding related to storm events in the future, due to sea level rise, warns the study Climate Change and Cities: First Assessment Report of the Urban Climate Change Research Network, in which Natenzón participated.

Damage to real estate from flooding in Buenos Aires is projected to total 80 million dollars per year by 2030 and 300 million dollars per year by 2050. “This figure does not account for lost productivity by those displaced or injured by the flooding, meaning total economic losses could be significantly higher,” adds the report, published in June 2011 by Cambridge University Press.

The magnitude of the last storm would have been inconceivable in other times, given the number of people affected and killed, the number of houses destroyed, the services interrupted and the state’s effort to assist the victims, said Murgida.

A week after the storm, thousands of families remained homeless, without electricity or water, and thousands of children and teenagers in the same neighborhoods still had no schools where they could go and have a roof over their heads, at least for a while.

* This article is one of a series supported by the Climate and Development Knowledge Network, which does not necessarily agree with its content.