HAVANA, Apr 9 2012 (IPS) - In response to the pressures of everyday life, some people in Cuba are promoting meditation as a way to protect the mind and body and foster a culture of peace. 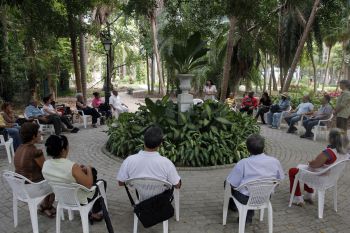 Group meditations are held in parks and other public places in Havana. Credit: Jorge Luis Baños/IPS

“People are looking for paths to inner peace and ways to live without stress. Having mechanisms for relaxation is a crying need everywhere in these times,” cultural promoter Juan Dávila told IPS. He identified about 10 groups on this Caribbean island that regularly use these techniques.

Since 2009, Dávila has coordinated a sociocultural community project, OM Meditación, Salud y Creación (OM Meditation, Health and Creation) in the historic district of the Cuban capital, with support from the Havana City Historian’s Office (OHCH).

As a self-managed group, OM Meditation organises mass gatherings in parks and plazas and educational courses, and forms alliances with other groups in Havana and in the cities of Holguín and Santiago de Cuba, 689 and 847 kilometres from the capital, respectively.

Meditation became widespread in Cuba about 20 years ago.

“Our approach is inclusive, with a convergence of different types of knowledge, to bring together all serious, regularised forms of meditation,” said Dávila, who is a follower of Ishayas’ Ascension, one of the techniques practiced in Cuba, along with transcendental and active meditation, Zen Buddhism and others.

Many established forms of meditation are practised in Cuba, while teachers and therapists have created new ones. But they should all have certain common traits, such as reaching a state of concentration about the present, freeing up the mind, focusing thoughts solely on God, breathing and the constant recitation of a word or words.

Health and community projects, researchers and religious groups join together for this purpose, in institutions such as the José Martí Cultural Society, the Faculty of Medical Sciences in Holguín, the Higher Institute of Design, the National Department of Natural and Traditional Medicine and the Dance Centre.

“We are building an ecumenical space for sharing this knowledge as part of a project that focuses on the community, environmental protection and coexistence with nature,” Dávila explained, after defining meditation as a “common core” that unites different types of initiatives.

In late March, 40 people associated with OM held their first collective meditation at the Quinta de los Molinos, the site of a future environmental park in Havana where the project will have its new offices.

One of the group’s goals is to register with the nongovernmental organisation Civil Society, Patrimony, Community and Environment, accompanied by the OHCH.

With its own resources and the support of OHCH institutions, in 2011 OM organised its first International Meditation Conference as a way to build networks among followers in Cuba and elsewhere, and more than 400 people attended.

OM plans to hold its second conference in June, with time to convene all groups nationwide. This includes Arcoiris de Cuba, which has been coordinated since 1999 by floral therapist Liana Liz Pérez. Her group invites people to meditate and “promotes individual and collective balance.”

“Community efforts are revolutionising ideas and citizenship,” the pharmacist told IPS in an interview.

“We are not organising miracle healing, just integral, spiritual community growth through floral therapy,” she said about the programme, based in the Havana municipality of Marianao.

Throughout the 20th century, traditions of this type became popular around the world and then became sucked into the consumer market and surrounded by myths. Some people, in this country as well, tend to believe that natural and traditional medical methods, such as meditation, cure all ills, to the extent that they reject or refuse Western medicine.

Dr. Martha Pérez, chief of the Natural and Traditional Medicine Department of the Public Health Ministry, says using this type of medicine represents “a lifestyle component, like exercise or diet, based on a personal decision about how you want to live.”

“We should not present it as a panacea that can cure any illness, because we can create false expectations,” Pérez told IPS.

She also said that “the practice of exercise that combines breathing, movement and meditation may benefit not only the individual but also our environment.”

Aeronautical engineer Roberto González, 62, has been using this centuries-old technique for two decades to free his mind. It helps him to “live a happier life, with a lucid mind,” he told IPS. “I’m a better husband, father, companion and worker, and more useful to society.”

The Public Health Ministry has had a natural and traditional medicine programme since 1991 as an alternative for dealing with the impact on public health of the severe economic crisis of the 1990s. Different types of therapy such as acupuncture became widely used, and meditation teachers gave their first seminars.

Some uses or ways of spreading these practices are met with reserve among part of the local medical community and scientists associated with health care. However, meditation is a “virgin field within the Cuban sciences,” Dr. Rafael Bestard commented to IPS.

Bestard, who uses meditation in treating psychiatric disorders and addictions, said the technique “improves social behaviour,” boosts self-confidence, improves job performance, and reduces social conflicts, one of the obstacles to a culture of peace.